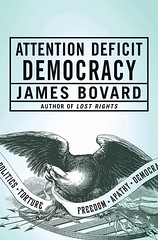 Instead of revealing the "will of the people," election results are often only a one-day snapshot of transient mass delusions.

In recent years, Americans have devoted far more effort to spreading democracy than to understanding it.

Attention Deficit Democracy lulls citizens into thinking that they have nothing to fear from the rising number of sticks and shackles that politicians and bureaucrats can use on them.

A democratic government that respects no limits on its own power is a ticking time bomb, waiting to destroy the rights it was created to protect.

Leviathan is premised on government's need to control the people. Democracy rests on people's right to control the government. The conflict between these two principles generates much of the deceit that permeates contemporary politics.

Washington policy debates are often like a criminal trial in which all the evidence of the defendant's past offenses is ruled inadmissible.

America is becoming a democracy of knocking knees, sweating foreheads, and folks who jump too high at any sound.

Thanks to the Battered Citizen Syndrome, the more debacles government produces, the more voters cling to faith in their rulers.

The more fears government fans, the fewer people will recall the danger of government itself.

It is naive to trust to the ignorant preferences of frightened people to preserve freedom.

As long as rulers are above the law, citizens have the same type of freedom that slaves had on days when their masters chose not to beat them.

Modern democracy is far more effective at unleashing government than at protecting individuals.

Democracy is merely a form of government. It is not a mode of salvation. It is not a catapult to the Promised Land. It is not a penicillin that cures all politically transmitted diseases.

The more authoritarian the U.S. government becomes, the louder presidents praise democracy. Unfortunately, democracy is a magical word that permits speakers to automatically fog the minds of many listeners.

The more powerful rulers become, the lower the odds for "free and fair elections." The bigger government becomes, the more votes it can buy.

The same type of myths have grown up around democracy that long propped up monarchs.

Since it has not been possible to neuter political power, citizens' thinking on government has been neutered instead.

Blind trust in government is often portrayed as a harmless error—as if it were of no more account than saying prayers to a pagan deity that didn't exist. However, the notion that rulers are entitled to trust is the most expensive entitlement program of them all.

Citizens are supposed to assume that a change in the name of the ruler, or a switch in the party in charge, automatically suspends the laws of political probability.

In a democracy, people are led to believe that they can easily apply the brakes to government, no matter how unstoppable it becomes.

The more that democracy is assumed to be inevitable, the more likely democracy will self-destruct.

Freedom has become merely another invocation to sanctify power.

Many citizens today behave akin to slaves who spent their time wishing for a good master, rather than scouting up information on runaway routes.

Just because a president's comments are insipid does not mean they are innocuous.

It is far easier to reduce politicians' power than to raise their characters.

Are Americans free simply because they are permitted a perfunctory choice on who will molest their rights and liberties? Is the sole question remaining in American politics—how to find a good master for the American people?

Attention Deficit Democracy produces the attitudes, ignorance, and arrogance that pave the way to political collapse.