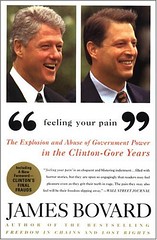 Epigrams from FEELING YOUR PAIN: The Explosion and Abuse of Government Power in the Clinton-Gore Years (St. Martin's/Palgrave, 2000)

Those who forget past boondoggles will be perpetually taxed for new boondoggles.

The issue is not how much a politician cares but how much power he seeks.

Clinton exploited and expanded the dictatorial potential of the U.S. presidency.

The Clinton administration built its "bridge to the twenty-first century" by filling every sinkhole along the way with taxpayer dollars.

Faith in the coercive power of the best and brightest permeated Clinton administration policymaking.

The Clinton administration consistently acted as if nothing is as dangerous as insufficient government power.

Clinton's attempt to forcibly lift people instead left government in the gutter - at least in the minds of tens of millions of Americans.

The more people government brings to its knees, the fairer society becomes – simply because government power is the personification of fairness.

The Clinton recipe for public safety was: if politicians can only frighten enough of the people enough of the time, then everyone will be safe.

FEMA's expansion symbolizes the proliferation of acceptable political pretexts for one citizen to stick his hand in another citizen's pocket.

The only concept of "disaster" guiding federal policy now is the horror that politicians may miss a chance to buy themselves more votes.

The principle of government supremacy is Clinton's clearest legacy.

Clinton's tax policy exemplified his "feeling your pain" public policy: the only pains that don't count are those inflicted by the government.

For scores of millions of Americans, Clinton's "caring" was more important than his lying.

The lies that Clinton got away with were far more important than the ones on which he was caught.

The better that people understand what Clinton did in office, the greater the nation's chances for political recovery.