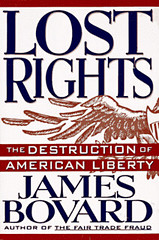 Beggaring the taxpayer is the main achievement of the welfare state. The federal tax system has turned individuals into sharecroppers of their own lives.

The key to contemporary American political thinking is the neutering of the State -- the idea that modern government has been defanged, domesticated, tamed.

Politicians have sought to maximize social progress by maximizing the number of people labeled to be criminals.