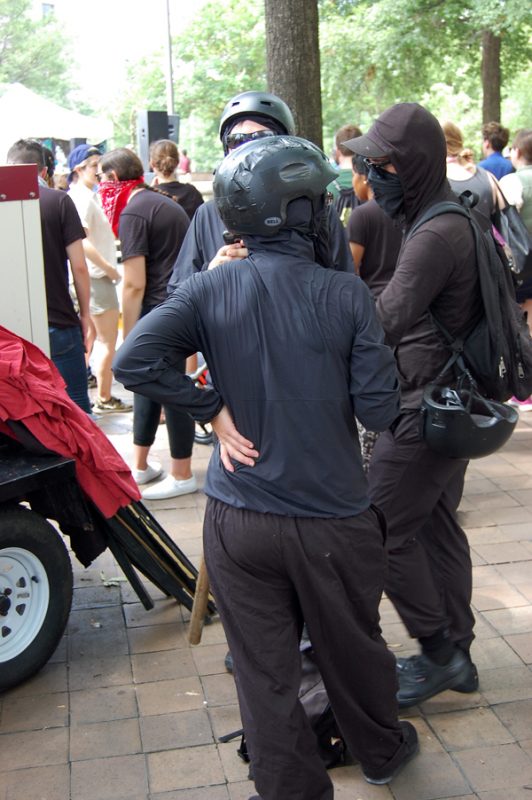 There was a list of “rules” for media covering their antics, which we now know include destroying property and clubbing journalists.

Washington’s Pennsylvania Avenue saw two competing protests near the White House on Saturday—a Proud Boys’ “Demand Free Speech”  rally, and a left-wing counter-protest organized by #AllOutDC which promoted the immediate expulsion of all accused Nazis, Alt-Right, and White Supremacists from the nation’s capital.

I slipped into the latter protest and took some close-up photos of black-drabbed Antifa activists gathered there to ostensibly lend a hand. After I posted a few photos online,  I saw a copy of the notice that AllOutDC organizers distributed warning the media not to photograph the faces of the left-wing demonstrators without “their explicit, stated consent.”

Mea Culpa! At least I didn’t violate the first rule of furtive photography: make sure the durn flash does not inadvertently go off.  (I also took quirky photos of the right-wing rally, including an unusual number of pro-Roger Stone t-shirts and a “Bikers for Trump” dude holding a giant “End the Bolshevik Media Monopoly” sign, but I saw no micro-managing of the media there.)

Shortly after I left the protests, Antifa demonstrators tried to attack the conservative protestors but the D.C. police easily swatted them away. No wonder AllOutDC’s sheet warned the media: “Be aware that photographs or videos can be used as evidence in court. Please avoid publishing any potentially incriminating photographs or video footage.” Such as the Washington Post photos of Antifa zealots dragging that arch-symbol of fascism, newspaper vending machines, into the street before they were routed by D.C. cops. That media notice could be helpful if prosecutors wanted to prove that Antifa violence was premeditated. (D.C. police did an excellent job of minimizing clashes at the demonstrations.)

Antifa outfits always make me think of Cirque du Soleil rejects. Or maybe their attire was inspired by overdosing on Batman re-runs. The media warning sheet also declared: “Please ensure that you have explicit consent before capturing auto recordings or directly quoting interviewees.” (Emphasis mine). Were they worried that someone might capture the sounds of the Batmobile, or what? They meant “audio” but were perhaps too distraught by Trump’s July 4th military-themed speech to proofread.

The media notification sheet concludes: “Members of the media who refuse to comply with these reasonable guidelines will be removed from the [safe space] permitted protest area.”  Perhaps after they are attacked with lead pipes and left with brain damage, as Antifa recently brutalized journalist Andy Ngo in Portland, Oregon? Or when Antifa activists knocked Washington Examiner journalist Julio Rosas’s phone out of his hand on Saturday?  Or when Antifa attacked journalists in Washington after the counter-protest to the “Unite the Right” micro-rally in Lafayette Park? Or when Antifa attacked the police and the media last August in Charlottesville?

One Reddit user commented, “The anarchists sure have a whole bunch of rules.” But Antifa are not anarchists—unless one presumes that any group has the right to award itself a monopoly on violence.

Those media guidelines tacitly presume Antifa folks deserve impunity when they physically assault anyone whose ideas they dislike. Antifa activists pride themselves on being anti-fascist shock troops. But their methods are little different than the Nazi Brown Shirts (Sturmabteilung) who maximized violence to destroy all confidence in the political system and spur Hitler’s rise to power.

Antifa’s absolutism brings to mind Finley Peter Dunne’s definition of a fanatic as “someone who does what the Lord would do if He knew the facts of the case.” Antifa and any other group should be allowed to publicly denounce President Trump as a fascist, tyrant, or serial golf score cheater.  But if the entire nation becomes like Portland, tacitly permitting masked Antifa attackers to maim who they please, American democracy is doomed.