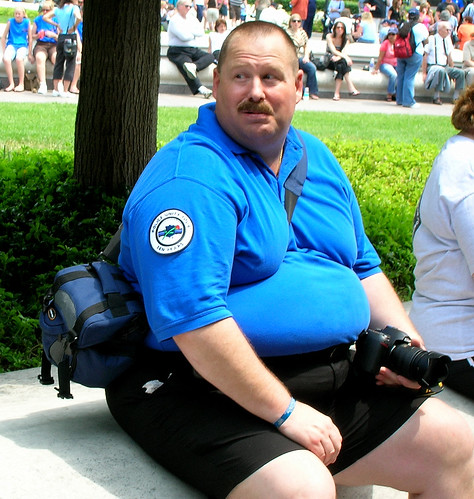 (the full size of this photo is available here.)

Mobs of cops were in Washington, DC last week for National Police Week. Their behavior was so bad that the DC police chief formally notified them that their public drunkenness would not be tolerated.

Many of the cops were bicycling around to draw attention to their campaign for a memorial to cops killed on duty.  I was cycling around downtown on Saturday, May 12.   Not only were they running red lights en masse, but they would surge out into busy streets and hold their hands up as if every driver was obliged to slam on the brakes (despite the green light) – and let royalty proceed.  They could have easily caused an accident – and perhaps they did at times when I was not watching.  (I did not see the cop biker I photographed above on his bike, and have no idea if he violated any laws).

The Washington Post printed a couple letters to the editor on lawless cops on Saturday.  Greg Davis of Reston, Virginia, complained:

Every year about this time, the District is subjected to bands of revelers who terrorize the local populace. Many of them are arrogant, belligerent and inebriated, and they violate laws at will. And our local police pretty much ignore them.

Why? Because these are police officers from other jurisdictions around the
country who have come here to “honor fallen officers.”

In reality, the offenders among them are criminals without accountability. It’s only a percentage, but it’s enough to bring shame to the badge and uniform because they abuse both.

Police Chief Cathy L. Lanier and police chiefs in neighboring jurisdictions
can cure this problem by arresting these badged criminals and sending them
home in handcuffs to let their own jurisdictions deal with them with pink slips.

I wonder if federal antiterrorism grants paid for some of the cops’ trips to rampage in DC.

UPDATE:  Comment # 72 is from the lady who courageously videotaped many police abuses during the National Police Week festivities.  She mentions, “Any input, help, support or even a few kind words at this point, would be appreciated.” Her email address is [email protected]      I wish there were more folks were her gumption in standing up to government agents abusing their badges and authority.

UPDATE # 2: Coming in as comment #75 – A response from Law Enforcement – a guy whose email slug is “SgtGlock”: “Your comments and beliefs are some of the most extreme and unamerican garbage I have read in years. I only hope that you are in need of an officer someday while you are on your knees groveling for your life to some street scum…  Be happy you are in a country that allows spineless people like you and your minions to exist and spread your crap to anyone who will listen to you. Do us all a favor and jump off of a tall bridge.”

93 Responses to Another Police Rampage in DC