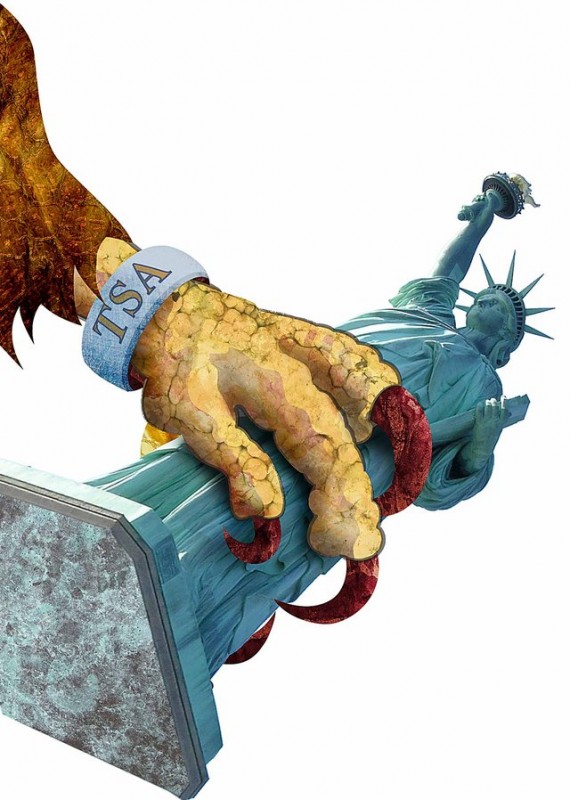 BOVARD: Transportation security doesn’t include the freedom to molest

The Transportation Security Administration (TSA) treats American travelers like cattle being chuted to a civil liberties slaughterhouse. Thanks to a federal appeals court, citizens have a golden opportunity to tell the agency what they think of the abuses it inflicts. But hurry: June 24 is the deadline to retort in an official forum on the Internet.

Federal agencies are required by the Administrative Procedures Act to give citizens a chance to comment on their proposed major new rules. Three years ago, the Electronic Privacy Information Center filed suit to compel the agency to seek public input on the advanced imaging devices it had recently begun using at airport checkpoints. The center labeled the scanners “one of the most sweeping, most invasive and most unaccountable suspicionless searches of American travelers in history.” The lawsuit was later joined by the Competitive Enterprise Institute. A federal appeals court ruled that the TSA must accept comments, and the agency grudgingly opened a 90-day comment period a few months ago.

Prior to its defeat in federal court, the TSA sought to squash controversy by insisting that the images from its whole-body scanners were too vague to violate anyone’s privacy. But the Electronic Privacy Information Center complained: “These machines, which show detailed images of a person’s naked body, are equivalent to a ‘virtual strip search,’ ” with photos “detailed enough to show genitalia.” The American Civil Liberties Union protested: “Passengers should not be required to display highly personal details of their bodies such as evidence of mastectomies, colostomy appliances, catheter tubes and the size of their breasts or genitals as a prerequisite to boarding a plane.”

The TSA also insisted that its radiating scanners were safe, yet refused to disclose key data to the public. An investigation by ProPublica and PBS’ “Newshour” found that the scanners could cause up to a hundred cancer cases per year among travelers. Citing health and privacy concerns, the European Union banned all body scanners that rely on radiating travelers. The New York Times noted last year: “Most of what is known of the risks of radiation has been extrapolated from disease trends in Japan after World War II” after atomic bombs were dropped on Hiroshima and Nagasaki. The TSA’s efforts to reassure about scanners’ safety should have included a big smiley face pasted atop a mushroom cloud. The agency recently announced that it had inserted new software in some machines and retrieved others from airports, but there is nothing to deter it from uncorking new nonsense.

It would be folly to trust the agency’s wisdom or benevolence. The TSA has rarely missed an opportunity to abuse Americans who refuse to kowtow. Travelers who prefer not to get X-rayed are obliged to formally notify agency personnel to request a separate search. Novelist Nathaniel Rich recently observed, “The official term for this is ‘opting out,’ a phrase that suggests a reluctance to honor a simple, reasonable request. The suggestion is that the unwilling passenger is the unreasonable one.” But that is “unreasonable” only if one assumes that citizens have an unlimited duty to grovel before federal agents. Many TSA agents were indignant toward anyone who refused to go through the machines and made the alternative frisking as punitive as possible.

The TSA claims that its advanced imaging devices are necessary to protect fliers. But a study by the Government Accountability Office found that the machines were dismal failures at detecting explosives. Rep. John L. Mica, Florida Republican and chairman of the House Transportation and Infrastructure Committee, declared, “If we could reveal the failure rate [of the scanners], the American public would be outraged.” Secrecy is the only thing that limits public contempt for the agency.

The TSA is like a nitwit magician who perennially pulls boondoggles out of a hat. Earlier this month, the Department of Homeland Security’s inspector general issued a report condemning the TSA’s Screening of Passengers by Observation Techniques (SPOT) program. The agency has spent almost $1 billion since 2007 for thousands of employees to loiter around airports. Agents chat up travelers and pay special attention to anyone who seems sweaty or nervous. In Boston, TSA’s SPOT team concentrated their attention on blacks who wore baseball caps backward. Not surprisingly, the program caught zero terrorists. The inspector general found that the TSA’s training for the program was abysmal and that its performance standards were nonexistent.

The TSA is renowned as “security theater” — an organization whose byzantine rituals provide only an illusion of safety. But the agency is also degrading the national political culture. Jeffrey Goldberg, writing for Bloomberg News, recently suggested that the “TSA’s groping softened us up for NSA’s snooping.” Mr. Goldberg speculated that federal bureaucrats may have “looked at the public’s bovine-like acceptance of its collective loss of dignity at the nation’s airports and realized that massive, invasive data collection wouldn’t spark a revolution.”

After the TSA has harassed and humiliated millions of Americans, now is the time to throw the penalty flag back at the agency. It will take less than five minutes to comment: simply go to http://www.regulations.gov/ and enter the code TSA-2013-0004. Almost 4,000 people have already commented, and the tide is running overwhelmingly against the agency.

Rather than making Americans safe from terrorists, the TSA made them prey to federal agents. There is no reason to expect the agency to turn over a new leaf. The agency has no liability to any American citizen it abuses or delays. Its follies are a warning to Americans to never expect safety from mindless, arbitrary power.

[[Thanks to Greg Groesch for the great illustration!]]