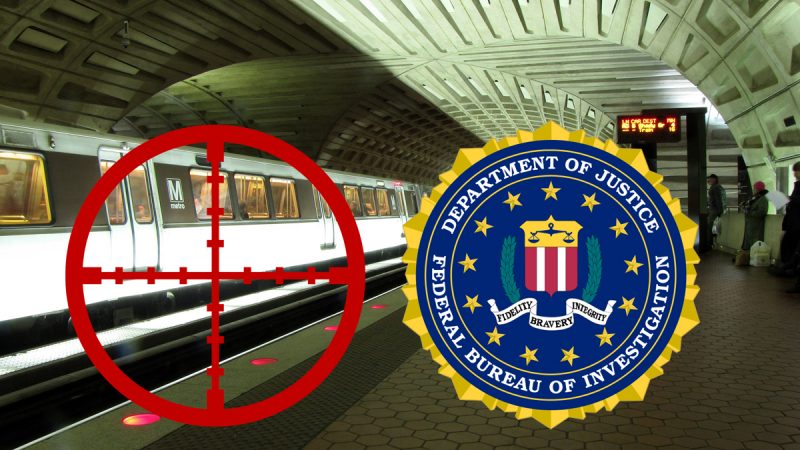 Was the torrent of media editorials and exposes denouncing police violence earlier this year all a sham?

Thirty-six years ago, Bernie Goetz pulled a pistol and shot four youths who were shaking him down on the New York subway. This was front-page news for weeks and spurred a deluge of anti-gun denunciations as well as condemnations of routine subway violence. Goetz was later acquitted by a jury on criminal assault and attempted murder charges.

Last Tuesday, an FBI agent pulled out his gun and repeatedly shot a passenger on the Washington subway. At the bottom of B6 in Saturday’s Washington Post – buried past an article headlined, “Despite the upcoming solstice, winter has already arrived” is a short piece headlined: “Police:‘Verbal exchange’ preceded Metro shooting.” There were zero news reports or disclosures for the two days after the shooting – except for a brief FBI note that there had been an “officer-involved shooting” on the subway.

What did the passenger say that provoked the shooting? It’s a secret – at least for the time being.

Did the FBI agent “go postal” after being taunted about J. Edgar Hoover wearing dresses?

Did the guy who was shot say “Black Lives Matter” or, even more recklessly, “All Lives Matter?”

Did the FBI agent lose control because someone violated Metro rules by eating an Egg McMuffin on the train?

Did the victim forget to say “Thank you for your service” to the FBI agent?

The Washington Post blocked all comments on the article, an unusual step that occurs when readers are prone to expose the cravenness or servility of Post articles that merely recycle government talking points on potentially explosive subjects.

If someone had shot an FBI agent without provocation on the subway five days ago, we would already know all about the shooter’s life – how many cat videos he liked on Twitter, how many crude jokes he told in high school, and whether he had any unpaid jaywalking tickets from 1997. If the person had any right-wing connections, the Southern Poverty Law Center might have heaved in a bucket of derision. If the person had any ties to radical leftists, Fox News might have hyped the case to expose the depravity of anyone who distrusts law enforcement.

But instead, the shooter was an FBI agent – so we don’t even know his name – or whether he has unjustifiably shot other people before, or been accused of excessive force in formal complaints. Instead, all we know is that the guy was a federal agent – and thus will benefit from all the immunities which politicians, judges, and FBI officials have heaped upon that class.

Two days earlier, a Post piece groused that “the FBI would not even answer questions about whether the person who was sent to the hospital was still alive.” That article lamented, “The lack of information follows a pattern in the Washington area of different levels of disclosure for officer-involved shootings…. When a federal agency is involved, transparency is often an afterthought” when federal agents shoot private citizens.

This is a scandal that began long before Trump arrived in the Oval Office. Five years ago, a Washington Post analysis gingerly noted that “details about shootings involving federal officers tend to be particularly closely held.” It took the Post almost two months to simply learn the name of a man killed during a 2015 FBI pornography raid in Chester, Penn. Apparently the only thing that the public was entitled to know was that the FBI killed a bad person.

The FBI almost always exonerates its own. The FBI initially claimed it was justified in killing Vicki Weaver at Ruby Ridge, slain by a sniper 200 yards away as she held her baby in a cabin door. An FBI internal report ruled that every shooting by an FBI agent betweens 1993 and 2011 was justified, spurring a New York Times headline: “The F.B.I. Deemed Agents Faultless in 150 Shootings.” The Justice Department exonerated an FBI agent who killed a Chechen man he was questioning in Florida after the Boston Marathon bombing. The Times noted “conflicting accounts about basic facts like whether the Chechen man, Ibragim Todashev, attacked an agent with a knife, was unarmed or was brandishing a metal pole. But Orlando homicide detectives are not independently investigating what happened.” An Orlando police spokesman told the Times: “We had nothing to do with it… It’s a federal matter, and we’re deferring everything to the F.B.I.” A year after the shooting, the Boston Globe revealed that the FBI agent who killed Todashev had a stormy record as a policeman in Oakland, California, where he “took the Fifth at a police corruption trial and was the subject of two police brutality lawsuits and four internal affairs investigations” before retiring at age 31. The Council on American-Islamic Relations (CAIR-Florida) is continuing to pursue a court case against the federal government over Todashev’s killing.

Similar privileges extend to other federal agents. After two U.S. Park Police killed an unarmed motorist in Fairfax County, Virginia in 2017, federal agencies blocked an investigation by local police and then the FBI took over and stonewalled for two years, even refusing to disclose the names of the police who killed 25-year-old Bijan Ghaisar.  As of mid-2020, the FBI was continuing to refuse to disclose hundreds of documents to Fairfax County prosecutors who were considering whether to file charges against the federal agents. The Justice Department announced that it would not file charges against the federal agents but Fairfax County indicted them for involuntary manslaughter in October.

This week’s shooting occurred near the Medical Center subway stop (home of Walter Reed Army Medical Center) in affluent Montgomery County, Maryland. Montgomery County police are also investigating. These are the same wizards who are continuing to cover up the pre-dawn, no-knock raid which fatally shot 21-year-old Duncan Lemp as he lay in bed on March 12 (covered by my American Conservative pieces here, here, here and here). Rene Sandler, the lawyer for the Lemp family, confirmed to me on Friday that Montgomery County has provided “no information, no answers” to the grieving Lemp family.  If Americans are going to learn the facts of the FBI subway shooting, it is unlikely to be thanks to any Montgomery County officials.

The prerogatives of FBI agents epitomize how America is becoming a two-tiered society: those above the law and those below it; those whom the law fails to bind and those whom the law fails to protect.  Sovereign immunity provides federal agents with the equivalent of legal bulletproof vests. As long as agents enjoy sweeping prerogatives for the use of deadly force, life will continue to be perilous for subway riders and damn near everybody else.

James Bovard is the author of ten books, including Public Policy Hooligan, Attention Deficit Democracy, The Bush Betrayal, and Lost Rights: The Destruction of American Liberty. He has written for the New York Times, Wall Street Journal, Playboy, Washington Post, New Republic, Reader’s Digest, and many other publications. He is a member of the USA Today Board of Contributors, a frequent contributor to The Hill, and a contributing editor for American Conservative