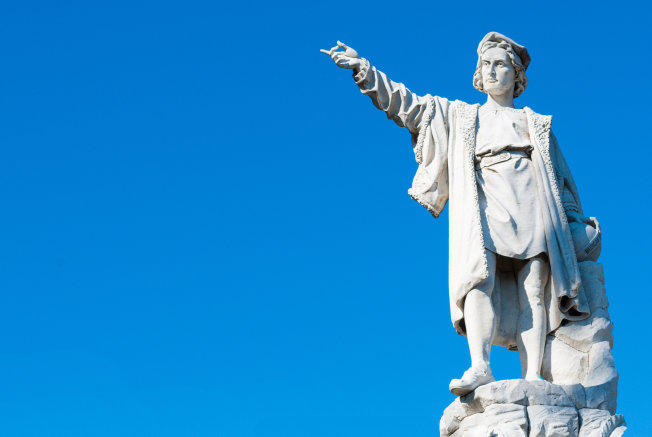 The End of the Christopher Columbus Fellowship Foundation? Not So Fast

The Christopher Columbus Fellowship Foundation’s ship has sunk after Congress refused to bail out the federal agency that critics say serves no legitimate purpose. It stayed afloat for more than two decades thanks to lawmakers doling out millions of dollars to award students for head-scratching innovations, including the idea that people are more likely to recycle if they are given a free recycling bin.

After 23 years on the federal till, the foundation spun into hiatus – at least temporarily – on April 15, in spite of a “Hail Mary” budgetary ploy that almost succeeded in snaring another bailout from Congress. But this story is far from over. It may resurface, as history suggests.

The rise and fall of the fellowship illustrates how federal spending is out of control – and why a sliver of hope remains that reformers might someday achieve meaningful cuts in useless outlays.

Congress created the Christopher Columbus Fellowship Foundation in 1992 with an all-encompassing mandate: to “encourage and support research, study and labor designed to produce new discoveries in all fields of endeavor for the benefit of mankind.”

The law was known affectionately in Capitol cloakrooms as “The Frank Annunzio Act” after the veteran Chicago Democratic Congressman implicated but never indicted in the great Savings and Loan scandal that cost taxpayers more than $130 billion in the 1980s and 1990s.

Two years earlier, Annunzio had faced the most difficult fight of his 28-year congressional career, barely surviving a challenger who painted him as a corrupt tool of banking interests. After his 1990 re-election, further details emerged of Annunzio’s role in the scandal and he announced that he would not seek another term in Congress.

With the Columbus Foundation as his legacy, Annunzio promised, “This program will be conducted at no cost to the nation’s taxpayers.” It would be financed instead by the sale of commemorative coins celebrating the 500th anniversary of Columbus’ arrival in The New World. The coins were expected to raise more than $50 million – enough to underwrite the foundation for several decades. However, sales were far lower than projected and raised only $7.6 million.

After retiring from Congress, Annunzio became the chairman of the foundation’s board of directors, a position he held until his death in 2001 of Parkinson’s disease. The board chose one of Annunzio’s top congressional staffers, Judith Shellenberger, as executive director and foundation headquarters were shifted to upstate New York, where Shellenberger then lived. Through 2008, the foundation was largely financed by an annual disbursement from the Treasury Department fund that collected revenue from the coin sales.

As long as the foundation relied on that endowment, it avoided controversy. But with money running out in 2008, Sen. Thad Cochran, R-Miss., who was legendary for his earmarking ability, secured $600,000 for the foundation, the vice chairman of which, James Herring, was a Cochran donor and former chairman of the Mississippi Republican Party.

Shortly after President Barack Obama was sworn in, the foundation received a $1 million boost from the Omnibus Appropriations Act of 2009. That 1,100-page bill contained more than 9,000 earmarks, ranging from $200,000 for a tattoo removal program in Mission Hills, California, to the $75,000 Totally Teen Zone in Albany, Georgia. The bill was ridiculed as epitomizing the collapse of budgetary discipline at the same time the deficit was climbing to record levels.

Before signing the spending bill, Obama announced in May 2009, “If my administration evaluates an earmark and determines that it has no legitimate public purpose, we will seek to eliminate it, and we will work with Congress to do so.”

Two months later, Obama formally requested that Congress rescind funding for the foundation and 120 other federal programs to save $17 billion. The White House declared that the foundation “serves no legitimate public purpose.” Foundation trustees, including the former executive director of the National Italian-American Foundation, the president of Ohio State University, and the former finance chief for the conservative political action committee Citizens for the Republic, launched a lobbying counterattack in which Shellenberger defended the program. “Our winners learn public speaking skills and how to talk to adults,” she said. “They are taught problem solving skills. There aren’t too many places you can find all of that.”

But some of the foundation’s recent picks for top prizes don’t necessarily reflect those ideas. For example, it awarded trips to Disney World and $2,000 college scholarship to school children to “explore opportunities for positive change in their communities using the scientific method.” The 2005 awards went to students from River Bluff Middle School in Stoughton, Wisconsin, who created a stuffed giraffe that squirts a jet of water to awaken children who might sleep through home fire alarms.

In 2009, the foundation’s Gold Medal went to students at the St. Philip the Apostle School in Addison, Illinois, who found that people are more likely to recycle trash if they are given free recycling bins. And the top award in 2013 went to students in Roan Mountain, Tennessee, for a solar-powered device to alert people that playground equipment surfaces become hot during sunny summer days.

Obama tried to zero out the foundation in 2010 and 2011. His efforts were joined by then-Sen. Tom Coburn, R-Okla., the lawmaker most vigilant in fighting government waste, but the Senate Appropriations Committee made sure that Coburn’s abolition attempt went nowhere.

In its fiscal year 2013 budget proposal, released in early 2012, the Obama administration again put the foundation on the termination list: “No Administration has proposed funding it since its creation two decades ago.”

But in January 2014, the foundation scored a $150,000 appropriation tucked into a 1,582-page, $1.1 trillion appropriations bill. While some critics linked Sen. Cochran to that budget item, “the Senator has not requested any appropriations for this program in at least the last two years,” according to spokesman Chris Gallegos, who said that the appropriation was put in by the committee’s Democrats.

When asked who requested the $150,000, the chief spokesman for the Appropriations Committee, Vincent Morris, told American Media Institute: “Not sure – how much did OMB ask for?” OMB had asked for zero.

Despite a follow-up request, Morris provided no additional information. Sen. Richard Durbin, D-Ill., a powerful Appropriations Committee member, previously worked with Cochran to secure funding for the foundation. Had he come through again? Questions to his spokesman produced no answers.

Regardless of who finagled the foundation’s last dollop of taxpayer support, Congress’ patience with the Foundation ran out. The Appropriations Committee reported on both appropriations bills for fiscal years 2014 and 2015 the following: “The Committee expects the Foundation to seek alternative sources of funds for its operations other than discretionary appropriations.”

With its funding shrinking, the foundation was forced to curtail its awards; only the award for middle school kids was presented in 2014, and no awards were given this year. The foundation’s long-term executive director Shellenberger retired in 2013. The foundation unceremoniously closed its upstate New York office and relocated to a small room in a sprawling federal office building in downtown Washington, District of Columbia.

The trustees appointed a new chief executive officer, Hallock Northcott, who, according to his profile on LinkedIn, specializes in “representation, access, and advocacy.” Northcott, who came out of retirement to take the position, is a former congressional staffer and trade association executive. Northcott’s salary was $98,000, less than the $106,000 Shellenberger received, and he led an effort to streamline the foundation to focus on science, technology and community service. He told AMI the foundation is temporarily closed because its Congressional funding has dried up.

The foundation spent $30,000 last year to hire one of the best-known and most aggressive lobbying firms in the district. Clients of the Livingston Group, headed by former House Appropriations Committee chairman Bob Livingston, R-La., have included Libyan dictator Moammar Gaddafi, Egyptian dictator Hosni Mubarak and the Republic of Congo, which hired the firm to get support for legislation to protect the regime from lawsuits seeking payments on defaulted debt. The Livingston Group’s employees and political action committee donated $334,000 to congressional candidates and political action committees in the 2011-2012 election cycle.

Northcott, who this year is working unpaid for the foundation on a “voluntary services agreement,” said there was no controversy about hiring the lobbying firm. After the contract expired, Livingston employees “volunteered their time as well – lots and lots of it. They are good people,” Northcott says.

The foundation had high hopes of getting fresh funding when Congress considered spending bills late last year. But in the massive omnibus appropriations bill enacted last December, there was no opportunity for members of Congress to offer amendments. Northcott stated that “there are offices on the Hill that if this program were to proceed specifically and solely as STEM [Science, Technology, Engineering, Math] education, would be interested in helping.”

The foundation requested that the Office of Management and Budget approve an appropriation of $676,000 for fiscal year 2016, but the Obama administration refused. A notice from the foundation’s board of trustees, posted on its website, stated, “As of March 31, 2015, the foundation has concluded ongoing federally funded operations while maintaining active fundraising grant and contract efforts. FY 2017 and 2018 federal funding are being actively considered by the Congress.”

The foundation also is looking at reviving itself strictly as a private sector/nonprofit entity but that has been handicapped by the pace at which the IRS is handling its nonprofit tax status application.

If the foundation can re-establish itself as a private entity, then it will at least no longer draw criticism from places ranging from The Washington Post to the Citizens Against Government Waste. But taxpayer watchdogs should not be lulled by its hiatus status. Other widely reviled federal programs such as wool subsidies were proudly axed by Congress or the White House, only to be quietly revived later. And it only takes one line in a single congressional appropriations bill to turn the spigot back on.