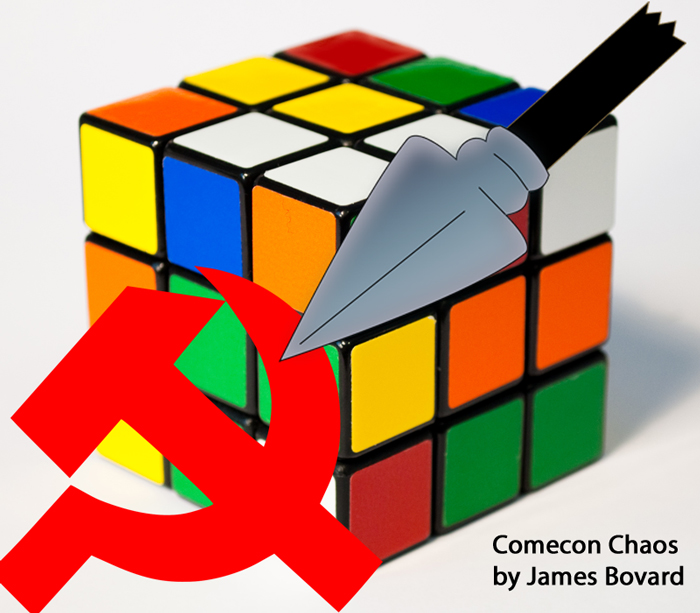 International Trade Under the Soviets: A Comedy of Errors

One of Ludwig von Mises’ great contributions to modern thought was his proof of the inability of economic calculation under socialism. This core truth should be recalled as many leftists seek to restore communism’s cachet. Perhaps nothing more vividly illustrates the mental paralysis that socialism begets than the foreign trade practices of East Bloc regimes.

In 1986, a Czech border guard stopped a Polish family leaving Czechoslovakia and ordered a Polish kid to take off his new Czech shoes “because taking children’s shoes out of the country is prohibited.” The Polish border guard watched passively – and then stopped a Czech car coming from Warsaw and ordered its new Polish tires stripped from the car, claiming that they had been illegally purchased in Poland.

Western trade wars were love fests compared to East Bloc trade fights. COMECON – the Council for Mutual Economic Cooperation – was derided by East Europeans as the “council for mutual exchange of inefficiency.” COMECON was the foreign trade organization of a group of nations that instinctively hated foreign trade.

In Budapest, the saying was “We deliver grain to the Czechs and they in turn deliver machinery to the Poles. The Poles then ship chemicals to the Soviet Union and as a final payment, we get a Russian folk dance ensemble in return.”

Foreign trade was a perpetual war in the East Bloc because no one could agree on prices. The nation’s currencies were not convertible – and the Transferable Ruble – the official COMECON currency – was about as transferable as a wooden nickel. Each socialist government sets its national prices according to its own fancies, usually with little or no attention to world prices. As Ed Hewett of the Brookings Instiution noted, prices “are administratively determined, with complete disregard for important economic considerations such as costs or the level of demand.”

Trade agreements among East Bloc countries were usually based on primitive barter arrangements – often simply on the gross poundage of objects to be traded – with no consideration or reward for quality.

In the early 1980s, Czechloslovakia and Poland agreed to cooperate in producing tractor parts. But, they were incapable of agreeing on a price so they simply swapped one kilogram of Czech tractor parts for one kilogram of Polish tractor parts. Both sides thought they were being shafted, so even this primitive agreement soon collapsed. As Indiana University eastern Europe expert Paul Marer observed, “The inability to have accurate cost-price calculations makes the specialization in production of parts and components nearly impossible.”

Since trade agreements were based on physical quantities, countries had a strong incentive not to improve the quality of the goods and to maximize the weight of their machinery and products. Eastern European manufacturers used up to three times as many raw materials per unit of output as do western manufacturers. But, virtues in COMECON trading were fatal vices in trading with the West. As the Director of the Hungarian National Planning Office complained, “Comecon is difficult to buy from, and the West is difficult to sell to.”

East European leaders distrusted foreign trade almost as much as some American congressmen do. Since each socialist government was obsessed with planning its own economy, each country tried on principle to minimize foreign influence. Trade as a percentage of GNP was far lower in eastern countries than in western countries.

This distrust was justified because COMECON members were notorious for “slack delivery discipline,” as the latest socialist euphemism went. The Soviets ceased exporting their highest quality cotton to their Warsaw Pact allies and that in turn crippled Eastern Europe’s ability to export clothing to the West. The Soviets also provided electricity to its neighbors but the poor quality of Soviet electrical grids led to increasing number of blackouts and brownouts, causing serious harm to Hungarian industry.

The usual socialist disregard of the consumer reached pathological extremes when the consumer was a foreigner – or at least a foreigner who is not paying with hard currency. It was extremely difficult to get spare parts for goods produced in other socialist countries. Hungary has had to import spare parts for its East German cars from Latin America.

While in the West most countries strive for a trade surplus, in the East Bloc each country preferred to have a deficit – to import more than it exports. The interest rate on outstanding trade debts was only 2% – and there was not a whole lot you can do with surplus “Transferable Rubles,” except paper the walls and wipe off the floors. But, most countries were very careful not to achieve a surplus, so trade among the small East European countries was far more balanced than it is among western countries.

Not only did countries try to balance trade with each other every year; they also aimed to strictly balance trade in each commodity group with each country each year. When Hungary invented the Rubik’s cube, many Russians would have loved to acquire the world’s most fashionable toy of the year. But, Hungary could not have increased its Cube exports to the Soviets without decreasing its toy piggy bank sales to the Soviets. So, it made little effort to satisfy Russian demand.

The combination of widely-differing shortages and subsidies among socialist nations created a huge incentive for individual arbitrage. East Germany practically shut its borders to Poles and Romania refused to allow Poles to carry anything into Romania without making a deposit in western currency for each item. East German border guards routinely took away East German shoes from other socialist visitors leaving the country and Hungarian border guards were forever seizing salami from people leaving Hungary. On crackdown days, trains were sometimes stopped and torn apart – including ripping out the seams in suitcases. Romania was notorious for its day-long backups at the border.

As Jan Vanous, Czech emigre and research director of PlanEcon consultants in Washington, DC, ironically observed, “They are heading a situation where they will weigh you when you go out of the country and they will weigh you with your luggage when you come back. You can eat – or you can throw something away and bring something in. But you can’t bring anything new in.”

Though COMECON’s problems were obvious, they could not be solved without destroying COMECON. Free trade and socialism were as irreconcilable as politics and honesty. If currencies were made convertible then nobody’s national plan would be safe, because foreign individuals and businesses could come in and buy what they chose. As long as governments are committed to central planning, foreign influences had to be minimized and strictly controlled.

Von Mises warned in 1920: “Socialism is the abolition of rational economy.” Comecon’s antics were one of the most vivid proofs of the folly of foregoing price mechanisms.

An earlier version of this piece was published in Wall Street Journal/Europe on January 25, 1987.

+++ Thanks to Pixabay.com for the royalty free images used to make the header collage.