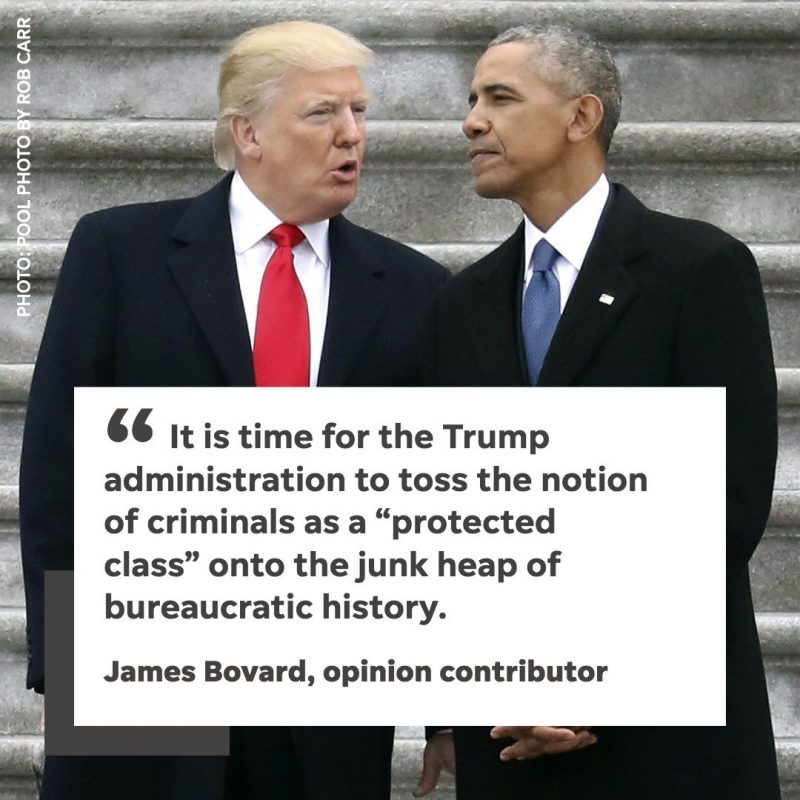 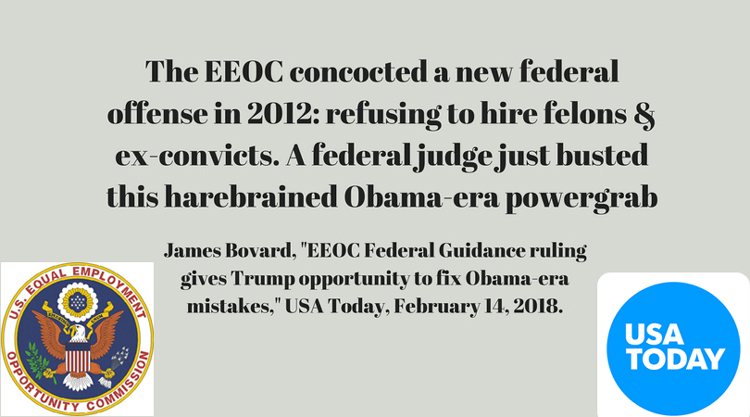 One of the Obama administration’s most aggressive social justice engineering schemes was busted earlier this month in federal court in Texas. In 2012, the Equal Employment Opportunity Commission effectively made it a federal crime for businesses to refuse to hire felons and ex-convicts. Federal Judge Sam Cummings ruled on Feb. 1, 2018 that the EEOC violated federal law in concocting this new federal offense, providing the Trump administration a divine opportunity to rein in run-amok bureaucrats.

The EEOC’s 2012 “Enforcement Guidance on the Consideration of Arrest and Conviction Records in Employment Decisions” was 20,000 convoluted words intended to browbeat businesses to cease checking the records of job applicants. EEOC commissioner Constance Barker, who opposed the new rule, warned that “the new Guidance will… scare business owners from ever conducting criminal background checks… the Guidance tells them that they are taking a tremendous risk if they do.”

The EEOC sporadically pushed this radical doctrine in earlier times but was harshly rebuffed. In 1989, the EEOC sued a Florida trucking company for refusing to hire a Hispanic applicant with multiple arrests and a prison term for larceny. Federal judge Jose Gonzalez Jr. snarled, “EEOC’s position that minorities should be held to lower standards is an insult to millions of honest Hispanics. Obviously a rule refusing honest employment to convicted applicants is going to have a disparate impact upon thieves.”

But the Obama administration rewrote the hiring rule book — part of its campaign to re-label felons and ex-convicts as merely “justice-involved individuals.” Under EEOC guidelines, criminals are often entitled to more consideration than other job applicants. Former EEOC General Counsel Donald Livingston warned that employers could be considered guilty of “race discrimination if they choose law abiding applicants over applicants with criminal convictions” unless they conduct a comprehensive analysis of the ex-offender’s recent life history.

U.S. Civil Rights Commissioner Gail Heriot testified to Congress: “The EEOC’s pattern of enforcement on this issue has been marked by something akin to religious fervor. It has targeted employers whose line of work is sensitive enough that the need for clean criminal records should be viewed as an obvious business necessity.”

The EEOC’s enforcement has been as capricious as the process of creating the new rules. The EEOC hounded the Freeman Companies, a Maryland-based convention and corporate events planner, demanding that it pay compensation to rejected job applicants who lied about their criminal records.

Federal Judge Roger Titus characterized an EEOC report on Freeman’s hiring practices as  “laughable,” “based on unreliable data,”  “rife with analytical error,” “completely unreliable,” “full of material flaws,” “distorted,”  “worthless” and “an egregious example of scientific dishonesty” and condemned the EEOC’s attempt to “make a mockery of procedural standards.” Titus complained that the EEOC demanded policies that would “condemn the use of common sense” and awarded almost a million dollars in attorneys’ fees to Freeman.

The biggest challenge to the new hiring regime came from the state of Texas, which launched a lawsuit in 2013 against the so-called “Felon-Hiring Rule” and claimed a “sovereign right to impose categorical bans on the hiring of criminals, and the EEOC has no authority to say otherwise.” Texas complained that, under the new rules, “even a preschool could not categorically refuse to hire all job applicants convicted of ‘indecent exposure’ in the last two years.” The EEOC insisted that “no legal consequences” flow from the Guidance. But EEOC Guidance is compulsory for every company that cannot afford half a million dollars in legal fees fighting the agency in court.

A federal appeals court scoffed at the feds’ non-binding claim in a 2016 ruling that noted that the EEOC was applying the Guidance to “virtually all public and private employers.” The case was remanded to a district court, where Judge Cummings found that the EEOC violated the Administrative Procedures Act by failing to offer a public notice-and-comment period before imposing the new rules.

“Enforcement guidance” is one of the favorite tools of bureaucratic dictators, entitling them to punish any entity that refuses to kowtow to the latest politically correct mandates. The Trump administration has already rescinded Obama-era guidance on how colleges investigate sexual assault claims, Americans with Disabilities Act compliance and many other areas. Trump’s nominee for assistant attorney general for the Civil Rights Division, Eric Dreiband, has strongly criticized the EEOC rule, which is part of the reason he is vehemently opposed by liberal activists.

University of Virginia economist Jennifer Doleac analyzed the data and concluded, “black and Hispanic men without college degrees are significantly less likely to be employed after ‘ban the box’ than before.” Civil Rights Commissioner Peter Kirsanow observed: “The fact that more African-Americans are hired when employers utilize criminal background checks indicates that in the absence of better information, employers use race as a proxy for criminal history.”

President Barack Obama declared in 2013, “The arc of the moral universe may bend towards justice, but it doesn’t bend on its own.” But recent experience shows that permitting federal agencies to bend the law and the Constitution is no substitute for justice. It is time for the Trump administration to toss the notion of criminals as a “protected class” onto the junk heap of bureaucratic history. 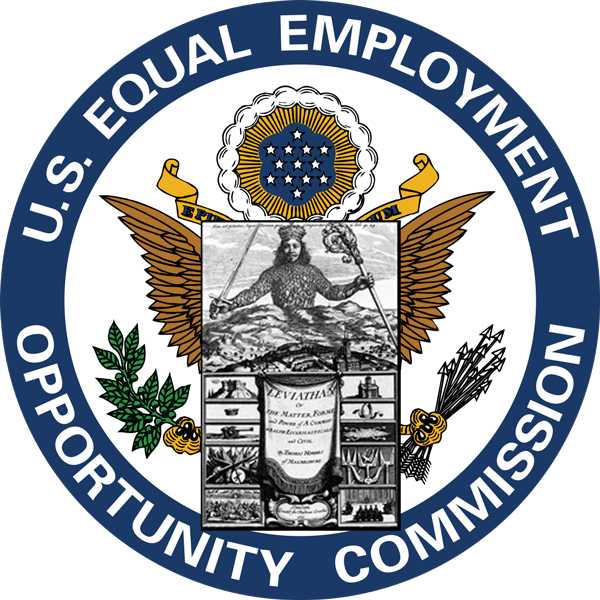