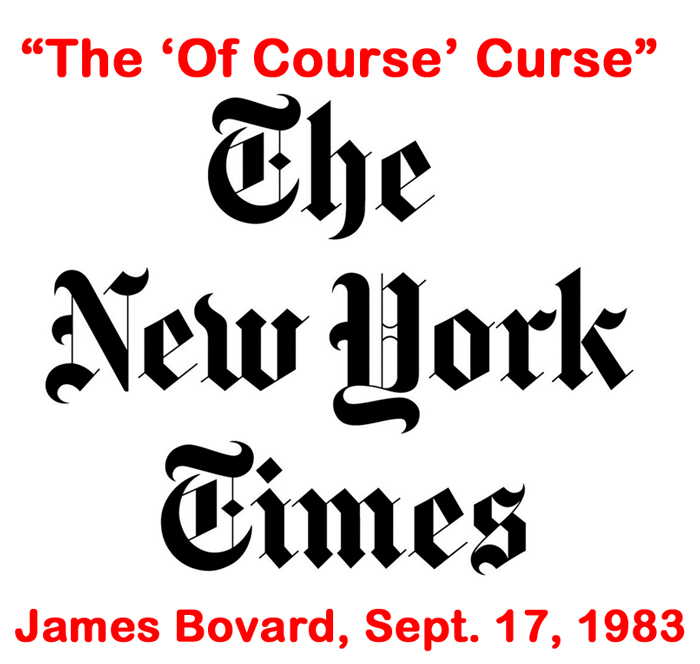 Thirty-five years ago, the New York Times published this satirical piece inspired by editors who stuck lame-assed nitwit phrases into my articles.  Happily, I have had no reason to complain about editors since then.  Admittedly, it is difficult to find editors who will tolerate “bedamned” in articles these days.

The article was accepted by Robert Semple, one of the greatest op-ed editors the New York Times ever had. Kyle Crichton did superb copyediting on the piece.

A single phrase is dangerously close to destroying the remnants of logic and eloquence in America.

”Of course” is now the most flagrant offender of all known standards of literary decency. The further that ”of course” extends its reign, the lower the trading value of the English language will fall.

In the past five years, ”of course” has proliferated far beyond the most pessimistic forecasts. At its current rate of reproduction, it is only a matter of time until every sentence begins and ends with ”of course.”

This one phrase has already killed, crippled or maimed half of the worthwhile sentences east of the Mississippi. There is a Gresham’s Law of vocabulary by which the increasing use of bad or counterfeit literary coinage inevitably drives out of circulation those phrases with real value. Unless this phrase is curbed, everybody will soon be talking like politicians.

”Of course” has become the foundation of contemporary logic, the world’s most condensed syllogism, the most egalitarian form of proof. Using ”of course” is like going on the dole, since the author usually assumes he has no obligation to support his statements. Even if writers do deserve welfare benefits, ”of course” is the least efficient system imaginable, as it discourages productivity, corrupts sentences and requires endless eye work by readers. Who among us has not kicked the furniture over sentences such as, ”The square root of 539 is, of course, 23.247.” And equally bedamned are constructions like, ”The sun, of course, will rise tomorrow.”

”Of course” should be banned under the Eighth Amendment’s prohibition of ”cruel and unusual punishment.” Such a ban may antagonize the First Amendment: but, as Justice Oliver Wendell Holmes said, freedom of speech does not give a man the right to yell ”Fire!” in a crowded theater. Likewise, freedom of press does not give a man a right to inject ”of course” into every third sentence. ”Of course” is a type of mental thumbscrew, and we should not stand idly by while millions are repeatedly tortured.

I am strictly opposed to capital punishment, except where a serious crime has been committed. It is not my part to say whether anyone who writes ”of course” should be automatically quartered. It is difficult to make such a judgment without knowing the relevant circumstances, such as: Was the author of sound mind and body? Was he aware of the basic principles of literary decency? Does he have a long history of molesting his readers? Did some editor sneak the phrase into the author’s work, solely to destroy his reputation? Is there any chance that the judicial or editorial system could beat such nonsense out of him? The offender should be given every benefit of the doubt – unless he repeats the heinous act.

There are always apologists for this sort of thing: Nowadays, every crime has its defender. Conservatives would insist that any attempt to reform or replace it could lead to a takeover by a Communist-inspired phrase. Liberals would insist on setting it free on probation, thus dooming future generations of readers. Luckily, most people are moderates, who, by now, support stomping this phrase out of existence.

If ”of course” cannot be abolished outright, perhaps a Federal law can be passed to confine it to San Francisco, or maybe Philadelphia. If ”of course” was constrained to a limited geographical area, it would probably depress property values and raise the suicide rate, but the rest of the country could compensate the chosen waste site. Or, perhaps the best solution is to confine the phrase to the Congressional Record, where it can do no harm.

If we do not strike soon, it will be too late. ”Of course” is dangerously near to achieving a majority control over all printed communication. The future of our pluralist vocabulary is at stake.

Tagline: James Bovard is, of course, a writer.