My first Wall Street Journal oped was published 35 years ago today.  It was a slash-and-burn attack on the Reagan administration’s hypocrisy for giving more handouts to business than they ever previously received.  Tim Ferguson was the WSJ editor who accepted the piece; he was one of the most courageous and principled editors I ever encountered.  My first conversation with him occurred on a Sunday afternoon just after my girlfriend and I had finished a tussle. I was still catching my breath, sounding like a hound dog that had been chasing a rabbit, when I answered the phone. Oh shit, it’s an editor. Oh shit, it’s the Wall Street Journal.  Sure – “the background on that detail in the third paragraph is….”  I reckon I answered his questions well enough for the piece to pass muster. Over the following dozen years, I worked with a lot of excellent WSJ editors, including Barbara Phillips, Erich Eichman, Melanie Kirkpatrick, Amity Shlaes, David Brooks, and David Asman.  Thanks to their feedback, my writing style gradually improved though my political attitudes proved incorrigible.

The Reagan administration has sharply increased subsidies for and protection of business. Government grants, loans and loan guarantees for business in 1983 totaled over $70 billion, twice the level of 1980. New import barriers have been erected, driving up the cost of protectionism to consumers to $70 billion a year, according to the Center for the Study of American Business. (CSAB estimates the 1980 costs at $58 billion.) Though President Reagan rhetorically deifies the free market, his administration routinely intervenes in favor of selected firms and industries.

When Mr. Reagan first took office, administration officials spoke of abolishing export subsidies, slashing agricultural supports and leaving the private sector to its own devices. But this administration has given more aid to business than any other administration in history. Export loans and loan guarantees are up from $8 billion in 1980 to a proposed $13 billion in 1984. Agricultural price supports are up from $3 billion in 1980 to $21 billion in 1983. The Payment-in-Kind program gave an additional $12 billion of commodities to farmers last year, while other agricultural and rural programs provided grants and loans of $18 billion. The government last year provided over $2 billion to small businesses, $400 million to enrich merchant marine owners and shipyards and over $100 million for grants and loans to businesses in distressed areas. The International Monetary Fund was given $8.4 billion to make new loans to bankrupt Third World countries and save American banks from taking losses on bad loans.

Business subsidies primarily redistribute profits, shorting some industries and firms in order to pump-prime others. Subsidies protect the least competent industries and least credit-worthy borrowers by sacrificing everyone else. It is not “pro-business” to intervene in favor of steel and against all domestic industries that need to purchase steel.

The Export-Import Bank claims subsidies are necessary to allow Americans to compete with foreign exporters. But Ex-Im Bank loans subsidized only 2.6% of our merchandise exports in 1982. The remaining 97.4% of sales needed no government handout. The Small Business Administration claims its handouts are necessary to preserve the role of small business. But, in 1982, 600,000 new businesses were started, and SBA gave financial assistance to only about 3,000 or 4,000. If SBA was vital, 99% of small businesses wouldn’t have survived. PIK was justified largely as “income maintenance” for farmers. But Agriculture Secretary Block testified early last year that three-quarters of all farmers were in solid financial shape before PIK began, and the largest benefits went to large corporate farms that needed help least.

Subsidies have not achieved their goals. University of Wisconsin economist Rachel McCulloch estimates that only 7% of Ex-Im Bank loans clinch sales that otherwise would not have been made. We have spent over $10 billion subsidizing our merchant marine since World War II, yet our fleet continues shrinking and now carries only about 4% of our trade. Billions of loans and grants to synfuel producers have not produced cheap fuel substitutes. Federal handouts to agriculture exceeded net farm income in 1983. Yet, the government is still burdened with huge wheat and dairy surpluses, and our exports are still declining.

Subsidies frequently contradict one another. In 1981, when President Reagan slapped import quotas on Japanese cars, the SBA guaranteed over $6 million in loans to Datsun and Toyota dealers. The administration has imposed many new barriers to steel imports. Yet, the Ex-Im Bank has tentatively approved a $30 million loan guarantee for the sale of steelmaking equipment to South Korea — so that we can subsidize our competitors and make life more interesting for American steel producers. The Agriculture Department spent over $30 billion driving up commodity prices in 1983 — and then spent $4.8 billion more for subsidized loans to allow foreigners to buy American goods at below cost.

Politicians have found no intelligent criteria for targeting profit-making enterprises for government handouts. Seventy percent of Ex-Im Bank loans go to a handful of large corporations, including Boeing, Westinghouse and General Motors. The SBA lends millions to CPAs, doctors and lawyers — not exactly the hard-core needy. In 1981, it helped Amarillo Slim’s Gaming School of Las Vegas. Farmers are subsidized in proportion to their acreage and production, so that the rich get richer while the poor stay poor.

Business subsidies make life easier for a few by making it more difficult for everyone else. American exporters who don’t receive subsidies lose sales to American exporters who do. Subsidized “small” enterprises can charge lower prices and drive unsubsidized competitors out of business. PIK gave billions of dollars of commodities to corn, wheat and cotton growers, but the resulting higher feed-grain costs helped bankrupt egg, pork and beef producers.

Subsidies are often intended to solve problems caused by other government policies. Exporting is difficult because of the strength of the dollar, due to huge budget deficits and high interest rates. Starting a small business is difficult, partly due to excessive regulation and government-caused high interest rates. Our merchant marine is sinking largely due to a 50% tariff on foreign repairs to U.S. ships; restrictions on cooperation among shippers for the use of terminals, vessel space and equipment, and arbitrary federal rate regulation that makes American operating and building costs noncompetitive. Many farmers are in trouble because the government encouraged them to grow more than they could profitably sell.

Businesses are heavily subsidized and protected because politicians never have enough campaign contributions. Congress agreed to pay dairy farmers not to produce because the dairy lobby gave congressmen more than a million dollars and persuaded urban representatives that their constituents would appreciate more expensive milk. Mr. Reagan signed that bill largely to help reelect Sen. Jesse Helms (R., N.C.) (tobacco was affected by a provision in the bill). The new textile import barriers were imposed to help reelect Sen. Strom Thurmond (R., S.C.). SBA loan files are full of intercessions by congressmen on behalf of their constituents. A congressman pushes through a $200,000 loan, and the businessman responds with a $1,000 campaign contribution.

Business subsidies divert capital from economically productive to politically productive uses. And, gruesome as the subsidy picture has gotten, it could worsen. Mr. Reagan’s proposed Department of Trade could make it through Congress. Or the Democrats could capture the White House and unleash their industrial policy.

There has to be a cheaper, less harmful way for politicians to raise campaign funds.

I wrote many attacks on farm and trade subsidies for WSJ in the following years, some of which were recast for the following books: 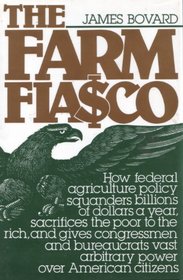 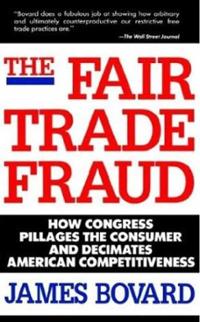 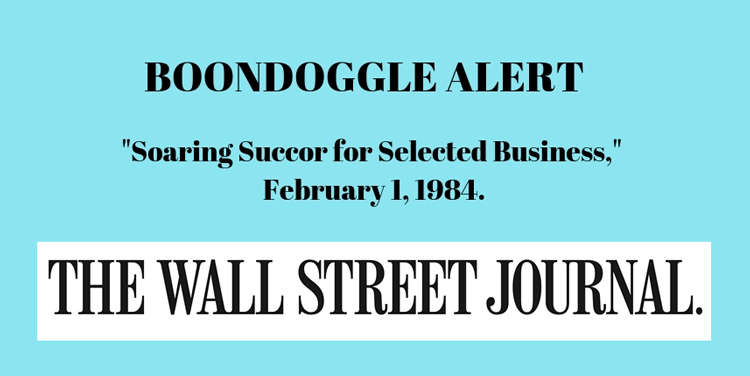