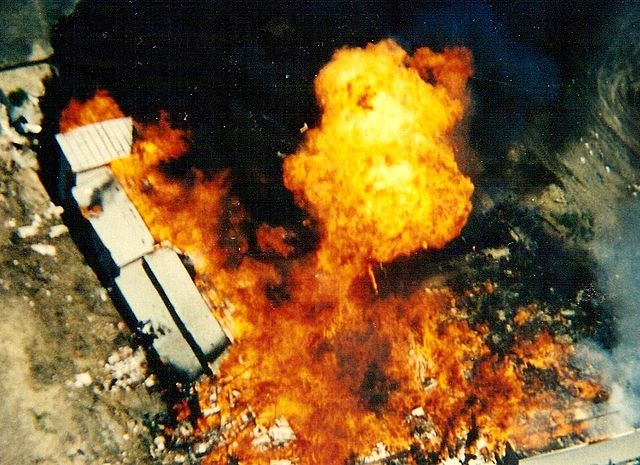 Hate crimes are a hot topic in the Trump era.  Here’s a piece I wrote 19 years ago that was published in the Washington Times and (probably) syndicated by Knight Ridder News Service. The government can never commit a “hate crime” against private citizens because federal agents are almost always presumed to have good intentions to the people they assault.

President Clinton is vociferously pressuring Congress to enact new hate crime legislation. Mr. Clinton repeatedly talks as if such a law would be the only thing standing between the United States and a tidal wave of barbarism. However, there is a double standard which effectively exempts the government itself from such legislation.

Mr. Clinton frequently evokes the issue of hate crimes in fund-raising speeches. In a Beverly Hills speech last Oct. 2, Mr. Clinton announced that hate is “America’s largest problem… . We cannot be under the illusion that either material prosperity or technological breakthroughs alone can purge the darkness in our hearts. Last Oct. 19, Mr. Clinton announced that hate crimes were “the biggest challenge facing” the nation and the world. By raising hate crimes to the top of the problem list, all political and governmental abuses are put in the shadows.

The key to hate crimes is the intent whether someone selected his victim based on race, ethnicity, religious belief, etc. Ironically, it is also an “intent test” that creates a de facto exemption for federal employees to violate the rights of American citizens and others. Most federal laws require that a federal agent be shown to have had an intent to violate citizens’ rights before the agent can be held personally liable for action that harmed people. Because the federal government is the final judge of the intentions of its employees, it is practically impossible for a federal agent to have acted maliciously or hatefully when carrying out his official duties.

Consider how the Clinton administration would have reacted if some of its own actions had been committed by private citizens with bad motives:

• If an Aryan Nation wacko had driven a bulldozer into a synagogue, collapsing the walls on the occupants, the feds would have issued press releases announcing prosecution even before the dust had settled. But when the FBI did the same thing at Waco, the Justice Department’s hand-picked special counsel John Danforth concluded the feds were merely trying to create “exit routes.”

• If an animal rights activists had blown up the only pharmaceutical factory in the U.S. producing a key drug to prevent an epidemic, the Clinton administration might have ordered the round-up of every registered pet lover in the country. But when the U.S. did the same thing in 1998 to a factory in The Sudan wrongly suspected of terrorist links, the White House shrugged it off as an innocent mistake.

• If a Klan member had gunned down a black mother holding her baby in the door of her cabin, the feds would have jumped to label it a hate crime. But after FBI agent Lon Horiuchi killed Vicki Weaver at Ruby Ridge in the closing months of the Bush administration, the Justice Department decreed in 1994 that there was no crime because Mr. Horiuchi did not intend to violate Mrs. Weaver’s civil rights.

• If disgruntled stockholders of a large tire company blew up CNN headquarters because it disliked CNN’s slant, the Clinton administration might have proposed sweeping new legislation to justify pre-emptive raids on all stockholders groups. But when Clinton ordered NATO to bomb Serb TV headquarters last year during his war against Serbia an attack that killed 16 people he justified it by asserting that Serb television had been used to “spew hatred and to basically spread disinformation.” And what are a few dead janitors compared to making a statement against hatred?

• If a Muslim terrorist group sought to punish the Great White Satan by blowing up passenger-filled Metroliners, destroying bridges over the Potomac, scattering cluster bombs in malls, and wrecking electricity plants, Mr. Clinton might have gone nuclear. But when the Clinton administration did the same things last year in Europe, the only motive involved was Mr. Clinton’s “moral imperative” to inflict justice on Slobodan Milosevic and his subjects.

One of Mr. Clinton’s unrecognized legacies is a two-class system in America: those whom the law fails to restrain, and those whom it fails to protect; those above the law, and those below it; those for whom there is “no controlling legal authority,” in Vice President Al Gore’s famous words, and those who for whom there are few, if any, constitutional protections. The Clinton administration perennially invoked sovereign immunity to protect wrongdoing feds. Mr. Clinton sought to raise the reputation of government to lofty new heights at the same time that Justice Department lawyers repeatedly argued that individual federal agents are exempt from liability for wronging other Americans.

The government should continue to vigorously prosecute any person who violently attacks other people regardless of the perpetrator’s motives. However, rather than new legislation to allow politicians and federal prosecutors to grandstand, we must reform federal law to protect Americans against their self-proclaimed protectors. American citizens have more to fear from unpunished federal agents than from state and local governments failing to prosecute high-profile vicious criminals.

James Bovard is the author of “Feeling Your Pain: The Explosion & Abuse of Government Power in the Clinton-Gore Years” (St. Martin’s Press).