UPDATE: YouTube slapped an “age-restricted video” designation on this interview that prevents people from viewing it unless they sign in with their Google account & attest that they are over 18 years old. Holy crap! I hardly cussed at all during that interview. YouTube devoted to assuring that young Americans blindly trust government or what? Thanks to the Ron Paul Institute for publicizing that restriction in this post.

Judge Napolitano and I made it hot for the FBI today on his “Judging Freedom” podcast.   The FBI had informants in the group that charged into the Capitol on January 6.  Was the FBI pulling strings or otherwise instigating the ruckus that followed?  Why did the Capitol Police have so few officers on hand despite a torrent of warnings?  Listen to the 17 minute interview below to hear some swings at answering those questions.

"On January 6, despite all the warnings, Capitol Police had less than 200 officers in the Capitol. It was like they were expecting a visit from the Future Farmers of America kids." https://t.co/prinmpX4QS

"They're trying to legally hang January 6 protestors for 'marching in the Capitol.' Hell, I've marched lots of places without a permit." https://t.co/prinmpX4QS

"Federal prosecutors are trying to hang the January 6 protestors with a harebrained clause from the Sarbanes Oxley Act of 2002 [dealing with financial fraud] and I think it is going to blow up in their faces." https://t.co/prinmpX4QS

Two years into the pandemic, I finally cleaned up the backdrop in my office. Still cluttered but “close enough for freelance work.” 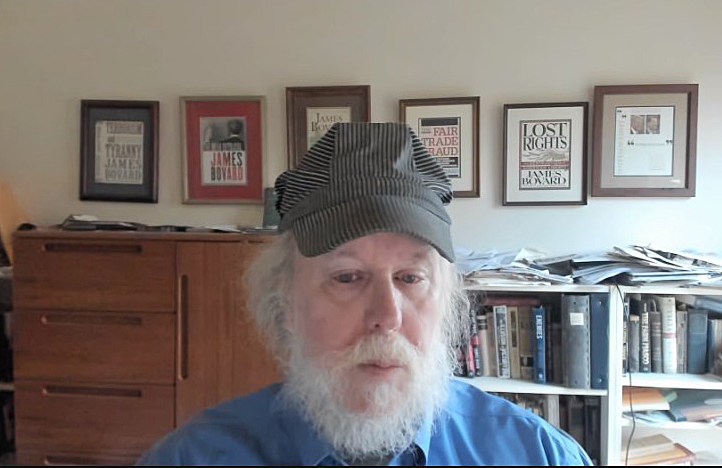