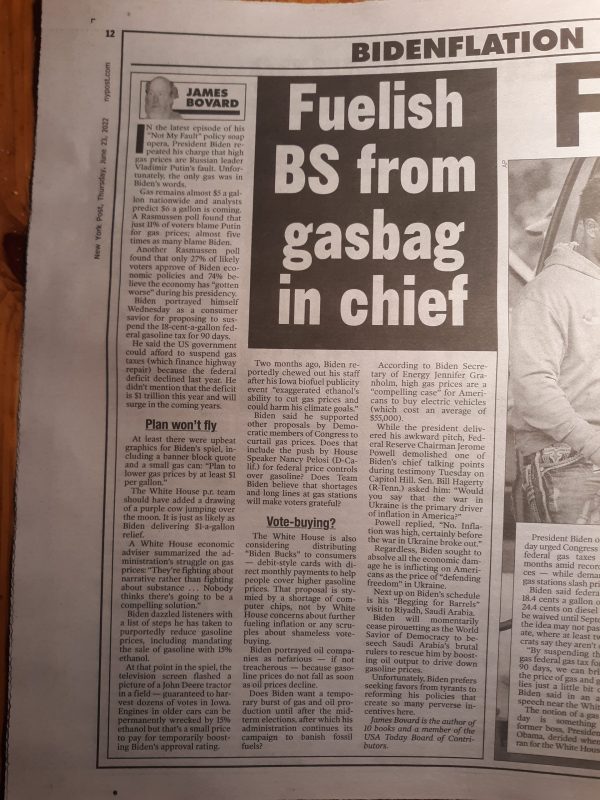 In the latest episode of his “Not My Fault” policy soap opera, President Biden repeated his charge that high gas prices are Russian leader Vladimir Putin’s fault. Unfortunately, the only gas was in Biden’s words.

Gas remains almost $5 a gallon nationwide and analysts predict $6 a gallon is coming. A Rasmussen poll found that just 11% of voters blame Putin for gas prices; almost five times as many blame Biden.

Another Rasmussen poll found that only 27% of likely voters approve of Biden economic policies and 74% believe the economy has “gotten worse” during his presidency.

Biden portrayed himself Wednesday as a consumer savior for proposing to suspend the 18-cent-a-gallon federal gasoline tax for 90 days.

He said the US government could afford to suspend gas taxes (which finance highway repair) because the federal deficit declined last year. He didn’t mention that the deficit is $1 trillion this year and will surge in the coming years.

At least there were upbeat graphics for Biden’s spiel, including a banner block quote and a small gas can: “Plan to lower gas prices by at least $1 per gallon.”

The White House PR team should have added a drawing of a purple cow jumping over the moon. It is just as likely as Biden delivering $1-a-gallon relief.

A White House economic adviser summarized the administration’s struggle on gas prices: “They’re fighting about narrative rather than fighting about substance … Nobody thinks there’s going to be a compelling solution.”

Biden dazzled listeners with a list of steps he has taken to purportedly reduce gasoline prices, including mandating the sale of gasoline with 15% ethanol.

At that point in the spiel, the television screen flashed a picture of a John Deere tractor in a field — guaranteed to harvest dozens of votes in Iowa. Engines in older cars can be permanently wrecked by 15% ethanol but that’s a small price to pay for temporarily boosting Biden’s approval rating.

Two months ago, Biden reportedly chewed out his staff after his Iowa biofuel publicity event “exaggerated ethanol’s ability to cut gas prices and could harm his climate goals.”

Biden said he supported other proposals by Democratic members of Congress to curtail gas prices. Does that include the push by House Speaker Nancy Pelosi (D-Calif.) for federal price controls over gasoline? Does Team Biden believe that shortages and long lines at gas stations will make voters grateful?

The White House is also considering distributing “Biden Bucks” to consumers — debit-style cards with direct monthly payments to help people cover higher gasoline prices. That proposal is stymied by a shortage of computer chips, not by White House concerns about further fueling inflation or any scruples about shameless vote-buying.

Biden portrayed oil companies as nefarious — if not treacherous — because gasoline prices do not fall as soon as oil prices decline. 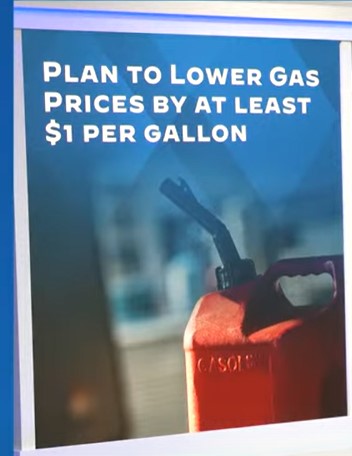 Does Biden want a temporary burst of gas and oil production until after the midterm elections, after which his administration continues its campaign to banish fossil fuels? According to Biden’s secretary of energy, Jennifer Granholm, high gas prices are a “compelling case” for Americans to buy electric vehicles (which cost an average of $55,000).

While the president delivered his awkward pitch, Federal Reserve Chairman Jerome Powell demolished one of Biden’s chief talking points during testimony Tuesday on Capitol Hill. Sen. Bill Hagerty (R-Tenn.) asked him: “Would you say that the war in Ukraine is the primary driver of inflation in America?”

Powell replied, “No. Inflation was high, certainly before the war in Ukraine broke out.”

Regardless, Biden sought to absolve all the economic damage he is inflicting on Americans as the price of “defending freedom” in Ukraine.

Next up on Biden’s schedule is his “Begging for Barrels” visit to Riyadh, Saudi Arabia. Biden will momentarily cease pirouetting as the World Savior of Democracy to beseech Saudi Arabia’s brutal rulers to rescue him by boosting oil output to drive down gasoline prices.

Unfortunately, Biden prefers seeking favors from tyrants to reforming his policies that create so many perverse incentives here.