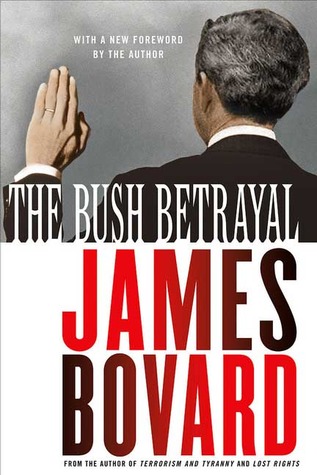 Yesterday’s New York Post piece on the FBI raid on Trump’s Mar-a-Lago home discussed why the Presidential Records Act was a sham. I have been hitting this theme for almost 20 years.  Here’s my first piece on the topic – an excerpt from my 2004 book The Bush Betrayal (St. Martin’s Press).   This article was published in 2005 by the Future of Freedom Foundation.
On November 1, 2001, President Bush issued an executive order entitled “Further Implementation of the Presidential Records Act.” His order effectively overturned an act of Congress and a Supreme Court decision and could make it far more difficult for Americans to learn of government abuses. Jonathan Turley, a George Washington University law professor, declared that the executive order “effectively rewrote the Presidential Records Act, converting it from a measure guaranteeing public access to one that blocks it.”

In 1978, Congress passed the Presidential Records Act, declaring, “The United States shall reserve and retain complete ownership, possession, and control of Presidential records.” The act was a response to the titanic clashes between Congress, the Supreme Court, and the Nixon administration over who owned Nixon’s records (especially those pesky tape recordings). The act requires that the unclassified papers of a president be routinely released 12 years after the president’s term ends. There are provisions in the act to justify non-disclosure of information that could threaten national security.

Two months after taking office, Bush’s White House counsel, Alberto Gonzales, issued an order delaying the release of 68,000 pages of records from Ronald Reagan’s administration that archivists at the Reagan library had already confirmed did not threaten national security or violate personal privacy. The release of records (including those pertaining to the Iran-Contra scandal) from the Reagan administration could have proven a profound embarrassment to many officials in George W. Bush’s administration as well as to his father (who was vice president under Reagan).

The White House completely misrepresented both the 1978 law and the new executive order. On the day after his surprise order, Bush commented, “We responded to a new law written by Congress that lays out a procedure that I think is fair for past presidents.” (Most 23-year-old laws are no longer considered new.) At a press briefing on the day Bush’s order was announced, White House press secretary Ari Fleischer said, “As a result of the new law that is now going into effect, and thanks to the executive order that the president will soon issue, more information will be forthcoming.” Fleischer insisted that Bush’s order was a triumph in open government because “under the existing procedures, existing law, a former president has the right to withhold anything for any reason, if they don’t want to make it public.”

That was ludicrous, since a post-Watergate Congress would not have passed a law to make presidents czars in perpetuity over the records of their actions in office.

Fleischer insisted that there “will be a 90-day time limit” on presidents’ right to review requests. Bush’s executive order mentioned 90 days, but a former president will be entitled to dally as long as he pleases.

After a journalist asked Fleischer about the new requirement for “people having to demonstrate their need for the information” about a former president’s actions, Fleischer snipped, “So you’re making guesses and judgments, all of which would indicate malfeasance or withholding of information by this administration. And I just can’t accept that; that’s not the case.”

The journalist responded, “So you are saying, trust us, it’ll all be fine?”

Fleischer snapped, “You are saying, we don’t trust you.”

Trust was the issue — regardless of whether Bush’s order was legal or constitutional and regardless of how much information could be hidden in perpetuity because of the new restrictions.
Suppression and secrecy

The White House Weekly summarized the changes in Bush’s order:

• It prohibits the release of records until both the former and incumbent presidents affirmatively consent to their release.

• It imposes no firm time limit on record reviews and assertions of privilege claims. It allows the former or incumbent president to extend the review period unilaterally and indefinitely.

• It requires the archivist to withhold records in response to any privilege claim by a former president, regardless of its merit. It thereby places the burden on the requester to sue to contest the privilege claim.

• It may be read to permit a former vice president to claim executive privilege.

• It asserts a very expansive view of the scope of executive privilege. It suggests that a requester under the Presidential Records Act must establish “a demonstrated, specific need” for records in order to overcome a privilege claim.

The people’s “right to know” has been replaced by former presidents’ right to suppress. Bush’s edict reversed the burden of proof in the law — as if a former president is presumptively entitled to have embarrassing facts and documents hidden forever.

Bush also sought to create a hereditary privilege not only for former presidents but for their wives and children and others to assert “state secrets privilege.” Turley notes that, under the order,

Bush’s own order commits the White House to a task — reviewing millions of documents — that it is probably physically unable to perform in a timely way. And why this Administration has concluded that the archivist has no more expertise, independence, or standing than, say, a White House deputy chief of staff, is also perplexing to scholars and members of Congress alike.

Bush’s order infuriated many historians. An American University historian, Anna Nelson, said that the order “sets up a minefield in front of what was a straightforward piece of legislation.” A Vanderbilt University history professor, Hugh Graham, observed, “Unless this executive order of his is overturned, it will be a victory for secrecy in government so total that it would make Nixon jealous in his grave.”

Bush’s order will make it easier for former presidents to perpetuate their cons on the American people. Presidents don’t suppress news of their good deeds and successes. Steven Hensen, president of the Society of American Archivists, commented, “The order effectively blocks access to information that enables Americans to hold our presidents accountable for their actions.”

Congress began consideration of a bill to overturn the executive order. Assistant Attorney General Daniel J. Bryant criticized one bill as “unnecessary and inappropriate and, more importantly, unconstitutional.” The Bush administration sought to settle the dispute by releasing most of the 68,000 pages of requested Reagan records, thereby proving that no legislative remedy was needed. Bryant wrote that “Congress lacks the authority to regulate by legislation the procedures for exercising” executive privilege. But Bush’s privilege is not the highest law of the land. (The bill stalled out.)

In contrast to Bush’s behavior, former President Clinton announced in early 2003 that he was waiving his rights to a 12-year delay in release of the vast majority of the confidential advice he received during his presidency (excluding arcane matters such as the Paula Jones, Monica Lewinsky, and Whitewater cases). Clinton declared,

The more information we can make available to scholars, historians, and the general public, the better informed people will be about the formulation of public policy and the decision-making process at the White House.

However, under the new executive order, Bush can veto the release of Clinton’s papers.

President Clinton issued an executive order in 1995 decreeing that most government documents will be automatically declassified after 25 years. His order contained an exemption for material that continued to be sensitive for national security. On March 25, 2003, Bush issued an executive order that delayed for years public access to millions of pages of documents that were scheduled for release in the following weeks. He claimed that “sensitive information” needed to be reviewed prior to the release — though the feds had had years to get ready for this deadline. The Bush order reversed the Clinton order’s presumption in favor of disclosure. Bush’s order also awarded the vice president the prerogative to block disclosures. And, in a triumph of revisionism, Bush empowered federal agencies to reclassify documents that had already been publicly released.

In April 2004, historians around the country became alarmed after the Bush administration nominated Allen Weinstein to be archivist of the United States. Many historians believe that the Bush administration may have nudged the current archivist, John Carlin, into retiring early so that Bush could put his own man in the slot — and thereby perhaps make it more difficult to get access both to his records and to the records of his father’s administration (which were scheduled to be released in January 2005). Historians were concerned about Weinstein’s close ties to Republican politicians and about former Secretary of State Henry Kissinger’s place on the board of Weinstein’s Center for Democracy. Timothy Slavin, president of the Council of State Historical Records Coordinators, complained, “It’s the equivalent of the administration’s thumbing its nose at the nation’s history. It seems to me that they were trying to bum-rush an appointment.” Anna Nelson observed of the administration’s process, “This is pretty sneaky. There is only one motive here, and that is they [the White House] had to be worried that Bush was going to be defeated” in the 2004 election.

The national archivist will also have sway over how quickly the records of the National Commission on Terrorist Attacks on the United States are released. There may be more surprises in the commission’s files than in its final report. The commission strained to appear bipartisan in its final report — but there was no such muzzle upon its digging and the information it acquired. Pointlessly restricting access to 9/11 materials could delay for decades Americans’ understanding of the role of government failures on that day.

Has the people’s “right to know” been replaced by presidents’ right to suppress?

Congress should reject Bush’s nominee for national archivist and should pass a law razing Bush’s Iron Curtain around presidential records. The more secrecy the government is permitted, the more lies the public will suffer.

This article was originally published in the January 2005 edition of Freedom Daily.