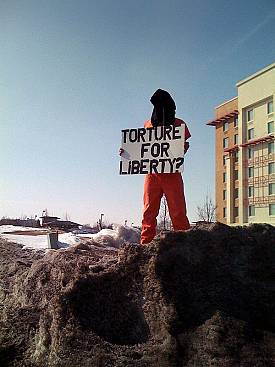 This piece from the July issue of The Freeman is now online here (in PDF) and here (in ASCII – paragraph breaks amended slightly in the version below).

Is torture compatible with liberty?

Unfortunately, this is no longer a hypothetical question. Many Americans who claim to support individual freedom also favour permitting the government to torture suspected terrorists or other purported enemies of the United States. This controversy is reminiscent of a disagreement between the famous economists F. A. Hayek and John Maynard Keynes. Hayek’s Road to Serfdom (1944) brilliantly restated the classical warnings on Leviathan, showing the similarities in trends between Nazi Germany and Western democracies. Keynes claimed that Hayek had gone too far in his criticism because “dangerous acts can be done safely in a community which thinks and feels rightly, which would be the way to hell if they were executed by those who think and feel wrongly.”

Many Americans have embraced Keynes’s assumption in the post-9/11 era. They have accepted that a democratic government should be permitted to unleash itself if the rulers promise to do good things. They have ignored or shrugged off the specific methods used because of their confidence that politicians “think and feel rightly.”

President George W. Bush exploited this confidence by invoking American values in response to his critics. Shortly after the Abu Ghraib prison photos were published, Bush brushed aside a question about his personal responsibility by assuring a French interviewer that “America is a great and generous and decent country.” After Amnesty International declared that the United States had become “a leading purveyor and practitioner” of torture, Bush sought to refute the charge by invoking American moral greatness: “The United States is a country that promotes freedom around the world.” Much of the American media continued praising Bush as a visionary idealist long after the evidence of grave abuses had surfaced.

The Bush administration’s invocation of freedom to justify its interrogation policies is premised on the assumption that the U.S. government could never be a threat to Americans’ freedom. The Founding Fathers recognized that individual liberty depends on a “government of laws, not of men.” Unfortunately, the Bush administration decided that the law could not be permitted to impede its war against terrorism.

Justice Department lawyers busied themselves creating legal pretexts for the President to scorn the federal Anti-Torture Act and the Geneva Conventions. A secret 2002 memo written by Justice Department official John Yoo proclaimed that “the President enjoys complete discretion in the exercise of his Commander-in-Chief authority and in conducting operations against hostile forces (…) We will not read a criminal statute as infringing on the President’s ultimate authority in these areas. “White House counsel Alberto Gonzales publicly declared that Bush had a “commander-in-chief override.” Thus the statute book no longer applied to the nation’s Supreme Leader.

Bush and his defenders continually portray the torture scandal as problems caused by a “few bad apples” or simply the equivalent of college-fraternity hazing. In reality, the abuses ranged from the endless high-volume repetition of a “Meow Mix” cat-food commercial at Guantanamo to tearing out toenails in Afghanistan to compulsory enemas for recalcitrant prisoners to beating people to death in Iraq and kicking them to death outside Kabul to illegally sending detainees to foreign governments to be tortured by proxy and creating a system of “ghost prisoners” worthy of a banana republic.

U.S. torture has been confirmed by FBI agents, former U.S. military interrogators, a Department of Defense Inspector General report, and court cases around the globe.

Yale law professor Jack Balkin wrote, “The President has created a new regime in which he is a law unto himself on issues of prisoner interrogations. He decides whether he has violated the laws, and he decides whether to prosecute the people he in turn urges to break the law.” After 9/11 the CIA constructed an interrogation program by “consulting Egyptian and Saudi intelligence officials and copying Soviet interrogation methods,” the New York Times noted last year.

The United States had long condemned Soviet, Egyptian, and Saudi torture. But interrogation systems designed to compel victims to sign false confessions provided the model for protecting America in the new millennium. Torture regimes crafted to perpetuate repressive systems suddenly became engines of freedom – at least in the eyes of some Bush supporters. The Justice Department produced a secret legal opinion in 2005 permitting CIA interrogators to use “combined effects” on detainees, including head slapping, simulated drownings (“waterboarding”), frigid temperatures, manacling people for many hours in stress positions, and blasting them with loud music to assure sleep deprivation. The New York Times, which published the leaked memo, labeled it an “expansive endorsement of the harshest interrogation techniques ever used by the CIA.” The memo signaled that the Bush administration explicitly rejected the definition of torture that had been used for the previous century.

From the time when the first Abu Ghraib photographs were published, President Bush emphatically denied that the U.S. government ever used or approved of torture. But this past April,ABC News revealed that Vice President Dick Cheney and other top Bush administration officials would sit around a table in the White House and specify the precise extreme interrogation methods that would be used on Muslim detainees. ABC noted: “The high-level discussions about these ‘enhanced interrogation techniques’ were so detailed (…) some of the interrogation sessions were almost choreographed – down to the number of times CIA agents could use a specific tactic.” Thus the number of times each prisoner could be whacked upside the head or almost drowned – or how long he could be shackled in a painful position – were decreed by the administration’s top officials. Attorney General John Ashcroft, who was the loudest apologist for Bush power grabs, warned, “History will not judge this kindly.” Bush later confirmed that he was aware that his top officials were dictating exactly how brutal the interrogations would become.

The torture scandal has made clear how little protection American laws provide to U.S. victims. Lawyers for four British citizens who had been locked up at Guantanamo from 2002 to 2004 sued U.S. officials, seeking damages for the illegal detention and torture they suffered. In January 2008 federal Judge Karen Henderson rejected their lawsuit, declaring that “torture is a foreseeable consequence of the military’s detention of suspected enemy combatants.” A federal appeals court ruled: “It was foreseeable that conduct that would ordinarily be indisputably ‘seriously criminal’ would be implemented by military officials responsible for detaining and interrogating suspected enemy combatants.” The court ruled that the officials could not be sued because they were merely carrying out their official duties. The fact that they were following Bush’s orders gave them legal immunity in American courts – a tacit revocation of the Nuremberg doctrines established in the war-crimes trials after WW II. Eric Lewis, the detainees’ lawyer, lamented, “It is an awful day for the rule of law and common decency when a court finds that torture is all in a day’s work for the defense secretary and senior generals.”

In recent years, the U.S. government has appropriated the title of the Supreme Defender of World Freedom, akin to the Catholic Church’s role as the defender of the true faith in earlier centuries. During the Inquisition, torture was justified to rid the world of heresy. Bush, who promised to “rid the world of evil,” perhaps feels justified in using torture to achieve his transcendent goal.

But this is where one of the problems arises. In the days after the 9/11 attacks, Bush talked about al Qaeda as the target of U.S. efforts.The target list soon expanded to include the Taliban, the Afghan rulers who had provided sanctuary to al Qaeda. Bush later added “radicals” and “extremists” to the list of enemies. Attorney General Gonzales declared in 2006 that it is “essential that we continue to develop the tools we need to investigate (…) and prosecute those who travel down the road of radicalization.” There is nothing to constrain a politician from labeling his opponents “radicals” – as has happened repeatedly in American history.

Some people support torture because they are confident that the government will only barbarize foreigners. This was how Bush’s power to designate enemy combatants was first sold to the public – as something that would only be applied to foreign perils. But after José Padilla was arrested in Chicago in 2002, his American citizenship did not save him from brutality while incarcerated in South Carolina and elsewhere in the United States. Once the government decrees that someone has no rights, it is a small step to declare that there will be no limits on how the government treats that person.

Some Americans support torture because of their distrust or hostility to Muslims, the usual target of contemporary extreme American interrogation methods. But the government claims the right to designate as enemy combatants (and thus eligible for torture) alleged members or supporters of any designated terrorist group. Irish Americans could be at risk of torture if the feds alleged they were linked to the Real Irish Republican Army, and Jews could face similar perils if the feds alleged their connection to the Sword of David or American Friends of the United Yeshiva Movement.

Human Rights Watch warned in 2005 that the government’s terrorist-group designation process has been “challenged in the courts for being vague, overbroad, and for there being no transparent criteria for listing entities on the lists or removing entities from the lists.”

Torture supposedly saves lives by providing the surest way to get the evidence of a “ticking time bomb.” There are no good verified examples of that from American experience. However, it was torture that produced “evidence” that spurred the American public to support Bush’s rush to war against Iraq. The “smoking gun” linking al Qaeda to Saddam Hussein came from an al Qaeda operative captured in Afghanistan, Ibn al-Shaykh al-Libi. Secretary of State Colin Powell relied on al-Libi’s information for his February 2003 presentation to the United Nations Security Council. However, Powell did not know that al-Libi had been tortured in Egypt – where he was “renditioned” by U.S. agents.

Had it not been for the torture of al-Libi, thousands of American soldiers might still be alive, and hundreds of thousands of Iraqis would not have perished in the 2003 invasion and the subsequent civil war.

Torture is not a “bleeding heart” issue; instead, it is simply a question of whether a president will have absolute power. In reality, the Bush administration’s torture policies are simply the most vivid example of its belief that the president is now permitted to do as he pleases. Assistant Attorney General Steven Bradbury declared in 2006: “Under the law of war, the president is always right.” Bradbury also informed a closed congressional committee in 2006 that Bush has the authority on his own to order killings of suspected terrorists within the United States. Bradbury’s assertion stirred zero controversy – despite the administration’s long record of false accusations of terrorist connections. The vast majority of people charged in federal terrorist investigations have not been convicted on terrorism charges.

The genius of the Founding Fathers was to recognize that the existence of perils cannot justify absolute power. The Constitution was created by a generation of men who had fought a war against the most powerful government in the world. At the same time, it was also a civil war, thanks to the pervasive Tory sympathizers in many parts of the colonies. The Constitution was not made for sunny days and smooth sailing. Instead, it was crafted for hard times, with many provisions for dealing with deadly threats to the nation’s survival. For a president to effectively claim that he can no longer be bound by the Constitution is an insult to the Founding Fathers who survived far harsher tests in their time than America did on and after 9/11.