By JAMES BOVARD
Millionaires are now legally entitled to collect food stamps as long as they have little or no monthly income. Thirty-five states have abolished asset tests for most food-stamp recipients. These and similar “paperwork reduction” reforms advocated by the United States Department of Agriculture (USDA) are turning the food-stamp program into a magnet for abuses and absurdities.

The Obama administration is far more enthusiastic about boosting food-stamp enrollment than about preventing fraud. Thanks in part to vigorous federally funded campaigns by nonprofit groups, the government’s AmericaCorps service program, and other organizations urging people to accept government handouts, the number of food-stamp recipients has soared to 44 million from 26 million in 2007, and costs have more than doubled to $77 billion from $33 billion. 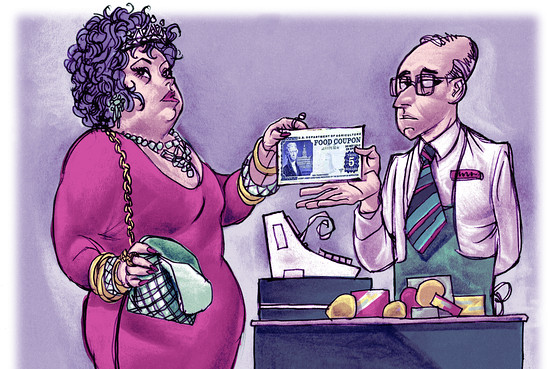 The USDA’s Food and Nutrition Service now has only 40 inspectors to oversee almost 200,000 merchants that accept food stamps nationwide. The Government Accountability Office reported last summer that retailers who traffic illegally in food stamps by redeeming stamps for cash or alcohol or other prohibited items “are less likely to face criminal penalties or prosecution” than in earlier years.

Lax attitudes toward fraud are spurring swindles across the nation:

• Earlier this month, the Milwaukee Journal Sentinel revealed that Wisconsin food-stamp recipients routinely sell their benefit cards on Facebook. The investigation also found that “nearly 2,000 recipients claimed they lost their card six or more times in 2010 and requested replacements.” USDA rules require that lost cards be speedily replaced. The Wisconsin Policy Research Institute concluded: “Prosecutors have simply stopped prosecuting the vast majority of [food-stamp] fraud cases in virtually all counties, including the one with the most recipients, Milwaukee.”

• Troy Hutson, the chief of Washington state’s food-stamp program, resigned in April after a Seattle television station revealed that some food-stamp recipients were selling their cards on Craigslist or brazenly cashing them out on street corners (for 50 cents on the dollar) and using the proceeds for illegal drugs and prostitution. Washington state Sen. Mike Carrell complained: “Dozens of workers at DSHS [the Department of Social and Health Services] have reported numerous unpunished cases of fraud to me. They have told me that DSHS management has allowed these things to happen, and in some cases actively restricted fraud investigations.”

• Thirty percent of the inmates in the Polk County, Iowa, jail were collecting food stamps that were being sent to their non-jail mailing addresses in 2009. But Iowa could not prosecute them for fraud because the state’s food-stamp form failed to ask applicants whether they were heading for the slammer. Roger Munns, a spokesman for the Iowa Department of Human Services, told the Des Moines Register last year that asking such questions could make food-stamp applications “unwieldy.” (Many states do make such inquiries.)

The Obama administration is responding by cracking down on state governments’ antifraud measures. The administration is seeking to compel California, New York and Texas to cease requiring food-stamp applicants to provide finger images.

• The food-stamp poster boy of 2011 is 59-year-old Leroy Fick. After Mr. Fick won a $2 million lottery jackpot, the Michigan Department of Human Services ruled he could continue receiving food stamps. The Detroit News explained: “If Fick had chosen to accept monthly payments of his jackpot, the winnings would be considered income, according to the DHS. But by choosing to accept a lump sum payment, the winnings were considered ‘assets’ and aren’t counted in determining food stamp eligibility.”

• Perhaps the biggest fraud of all is the notion, which the USDA has been touting lately, that the food-stamp program is a nutrition program. (The program’s name was formally changed in the 2008 farm bill to the Supplemental Nutrition Assistance Program—SNAP—to make it sound more wholesome and attractive.) What is really does is boost caloric intake, which is why numerous studies (including a 2009 Ohio State University report) link food stamps to the worsening obesity epidemic among low-income Americans.

The USDA has vetoed all proposals from local or state governments to prevent food stamps from being used for junk food. With the feds’ approval, food stamps are increasingly being redeemed at fast-food restaurants—one of the primary culprits in ballooning American bellies.

But the Obama administration doesn’t deserve all the blame. Food-stamp enrollment surged before Mr. Obama took office. The number of food-stamp recipients on George W. Bush’s watch rose by more than 50%, even before the recession hit in 2007. As Slate reporter Annie Lowrey wrote for the online magazine last December, President Bush and his food-stamp chief Eric Bost “went on a quiet crusade to expand eligibility, increase enrollment, and reduce stigma around nutrition aid.”

H.L. Mencken quipped that the New Deal divided America into “those who work for a living and those who vote for a living.” The explosion in the number of food-stamp recipients tilts the political playing field in favor of big government. The more people who become government dependents, the more likely that democracy will become a conspiracy against self-reliance.

Mr. Bovard, the author of “Attention Deficit Democracy” (Palgrave, 2006), is working on a memoir.