From today’s Washington Times   [thanks to Alexander Hunter for the great art work!]

There’s no counting of cops who kill 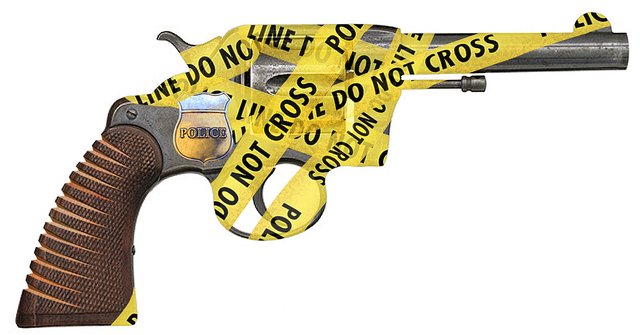 President Obama is promoting his gun-control agenda by appealing to “all the Americans who are counting on us to keep them safe from harm.” Some perils, however, are not worth registering on Mr. Obama’s scorecard. While the president’s strident warnings about privately owned guns evoked a hallelujah media chorus, his administration is scorning a mandate to track how many Americans are shot and killed each year by government agents.

The same 1994 law that temporarily banned the sale of assault weapons also required the federal government to compile data on police shootings nationwide. However, neither the Justice Department nor most local police departments have bothered to tally such occurrences.

Instead, the Justice Department relied on the National Crime Survey of citizens to gauge the police use of force. Yet as professor James Fyfe, one of the nation’s foremost experts on police shootings, observed in 2001, “Since dead people can’t participate in such a survey, this work tells us nothing about how often police kill.”

Many police shootings involve self-defense against violent criminals or help protect people against dangerous culprits in the act of wreaking havoc. However, police killings are not a negligible proportion of the nation’s firearms death toll. Shootings by police accounted for almost 10 percent of the homicides in Los Angeles County in 2010, according to the Los Angeles Times.

Jim Fisher, a former FBI agent and criminal law professor, compiled a database of police shootings and estimated that police in the United States in 2011 shot more than 1,100 people, killing 607. Mr. Fisher relied on the Internet to track the casualties, and the actual toll may be significantly higher. (Many police departments are very secretive about their shootings and succeed in withholding either numbers or key details from the public.) Mr. Fisher’s numbers do not include cases of off-duty police who shot acquaintances, such as the recent case of the veteran, married D.C. policeman convicted of murdering his girlfriend and leaving their 11-month-old baby to die in an overheated SUV to avoid paying child support.

According to the FBI, 323 people were killed nationwide by rifles in 2011 — less than 4 percent of the total deaths by firearms. The official statistics are not broken down by the type of rifle, so it is impossible to know how many of the victims were slain with the type of weapons that Mr. Obama classifies as “assault” weapons. Nationwide, 10 percent of the killings with rifles were committed by law enforcement officers, according to the FBI. Ironically, the raw numbers of killings by police are tossed into the firearm fatality totals that some politicians invoke to drum up support for confiscating privately owned guns.

Not only do government agencies fail to track official violence against Americans, they also sometimes pre-emptively exonerate all such attacks. A 2001 Justice Department report entitled “Policing and Homicide, 1976-1998” labeled everyone in the nation who perished as a result of a police shooting as “felons justifiably killed by police.” There were hundreds, if not thousands, of people shot unjustifiably by the police in those decades, but their innocence vanished in the flicker of a federal label. The Justice Department was so embarrassed by the report’s “lack of distinction between justifiable police shootings and murders, that it did not send out its usual promotional material announcing the report,” according to the New York Times.

At the state and local level, the deck is often stacked to vindicate all police shootings. Police unions have strong-armed legislation that guarantees their members sweeping procedural advantages in any post-shooting investigation. For instance, Maryland police are protected by a “Law Enforcement Officers Bill of Rights” that prohibits questioning a police officer for 10 days after any incident in which he or she used deadly force. “A lawyer or a police union official is always summoned to the scene of a shooting to make sure no one speaks to the officer who pulled the trigger,” The Washington Post noted in an expose of the police in Prince George’s County, Md.

Investigations of police shootings in Las Vegas (which had one of the highest rates of police homicides in the nation) were stymied in 2010 and 2011 because “police unions balked at inquest reforms, first by advising members not to testify at the hearings and then helping officers file a lawsuit challenging the new system’s constitutionality,” according to the Las Vegas Review Journal. Las Vegas is so deferential to police that, in cases “where an officer shoots but only wounds or misses entirely … the district attorney looks at the case only if the shooting subject is being prosecuted,” the Review Journal noted.

The federal government has no credibility condemning vast numbers of private gun owners as long as it refuses to compile the casualty count from government agents. Washington has deluged state and local law enforcement agencies with billions of dollars in aid in recent years. Is it too much to ask the recipients for honest body counts?

Waco: 20th Anniversary of the ATF Attack on the Branch Davidians
Friends of Police Object to Article on Shootings by Police