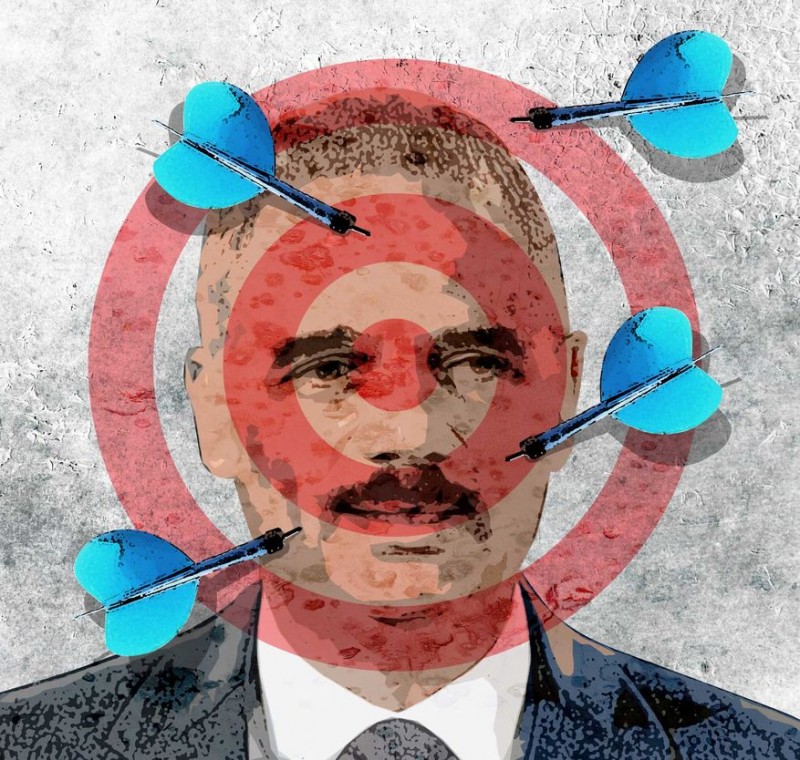 There are no Ferguson-style probes when black police shoot blacks

Attorney General Eric H. Holder Jr. is enjoying a tidal wave of laudatory press coverage for his activism on the Ferguson, Mo., shooting and subsequent protests. In the 1990s, though, Mr. Holder ignored plenty of cases of District of Columbia black cops killing unarmed black civilians — even when policemen lied about the shootings.

Mr. Holder was appointed in 1993 by President Clinton as U.S. attorney for the District of Columbia. At that time, D.C. police were killing more civilians than any other large city police force, based on population. The number of killings by D.C. police quadrupled between 1989 and 1995, when 16 civilians died as a result of police gunfire.

Mr. Holder never noticed that the D.C. Metropolitan Police Department failed to count almost half the people killed by their officers between 1994 and 1997. Mr. Holder commented in 1998: “I’m not really sure I discerned any patterns [in police shootings] — at least none I remember.” A 1998 Pulitzer-prize-winning Washington Post investigation concluded: “The rise in police shootings in the mid-1990s went largely unnoticed among the top officials charged with policing the police.”

Mr. Holder is now being portrayed as a champion of minorities victimized by police, but this attribute was not detectable in the 1990s. The Post noted that “none of the police shootings of civilians has occurred in the more affluent areas west of Rock Creek Park.” Because most police victims were from the lower-income parts of the city, their plight went largely unnoticed.

Mr. Holder made a heavily trumpeted visit last Thursday to the parents of Michael Brown, the 18-year-old killed by a Ferguson policeman. However, did Mr. Holder ever bother visiting the families of young people unjustifiably slain by the D.C. police? I called the Justice Department press office asking this question but never heard back. Press clips from the 1990s do not include any reports of Mr. Holder meeting with parents of children unjustifiably slain by the D.C. police.

At 9 a.m. on May 15, 1995, a D.C. policeman pursued a car that he claimed he had seen driving recklessly on Florida Avenue in the Northwest quadrant of the District. The policeman walked up to the vehicle and shot 16-year-old Kedemah Dorsey in the chest. The car began pulling away, and the policeman hopped alongside and shot the boy again in the back, killing him. Lawyer Doug Sparks, sitting in a nearby car, told The Post: “It was basically at point-blank range. I thought it was some kind of drug shooting.” The policeman claimed that he fired because Dorsey, who was scheduled to start his shift at Burger King later that morning, was trying to run him down. Lawyer Michael Morganstern, who sued the District government and collected $150,000 for the family, commented, “It’s somewhat difficult to use the car as a weapon when it is wedged in rush-hour traffic and the officer is standing to the side of it, not in front of it.” A police department investigation concluded that the shooting was unjustified, but Mr. Holder’s office refused to file charges against the policeman.

Mr. Holder was feckless even when a policeman confessed to lying about killing an unarmed teenager. After Roosevelt Askew killed a 19-year-old motorist during a 1994 traffic stop, he claimed he fired because the driver was trying to run over another policeman. This story soon collapsed. In early 1995, Officer Askew admitted to Mr. Holder’s office that he had lied and then claimed he shot the teenager accidentally. No charges were filed against Officer Askew until a year-and-a-half after his confession. The case lingered on the back burner until after Mr. Holder moved on to become deputy attorney general under Janet Reno. The U.S. attorney office eventually signed off on a deal that let Officer Askew merely plead guilty to filing a false police report; he received two years probation and a $5,000 fine. Federal Judge Harold Greene was appalled at the wrist slap: “This is a bizarre situation. Everybody, including the government and the probation office, suggests that probation is the appropriate remedy. Although I am not entirely satisfied, we have the full story, I’m going to go along.”

Perhaps Mr. Holder did not notice the surge in police killings because he was fixated on banning private guns. He lobbied the D.C. Council to impose mandatory prison sentences for anyone convicted of possessing a gun and spurred D.C. police to carry out “the most comprehensive [private] gun-seizure program in the country” (bankrolled by the Justice Department). In a speech on Martin Luther King Day in 1995, Mr. Holder declared that schools should preach an anti-gun message every single day. He also proclaimed that we need to “really brainwash people into thinking about guns in a vastly different way.”

But Mr. Holder has devoted much of his career to brainwashing people to think that it is safe to trust government at all levels with vast power. In the Clinton administration, he worked to expand asset forfeiture and to whitewash an FBI assault that left some 80 people dead in Waco, Texas. Mr. Holder now champions President Obama’s prerogative to kill individuals on his own authority — the ultimate in absolute power.

The Ferguson shooting and subsequent protests have spurred hope for reforms that will end long-term police abuses. It would be naive, however, to expect any new law to make federal, state or local agencies to come clean on their use of deadly force. As long as Mr. Holder remains attorney general, Americans cannot expect the Justice Department to recognize that the Bill of Rights should trump politicians’ power lust.

Thanks to Greg Groesch for the zippety art work