Senators are brawling over the renewal of the Patriot Act. Few folks recognize how the feds have been brazenly lying about the Patriot Act ever since it was enacted. Here’s an oped I did a dozen years ago pointing out a few of the Justice Department’s frauds. 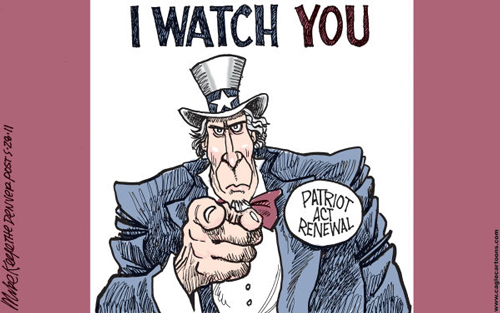 THE BUSH administration, Congress and civil liberties groups are heading for a showdown over Patriot Act provisions on library searches.

Unfortunately, the Justice Department is using a blizzard of fabrications to defend its new post 9/11 powers. Public libraries are rapidly becoming the front line for determining how far the Feds will be permitted to intrude into Americans’ lives in the name of anti-terrorism.

A secret court now has jurisdiction over the reading habits of the American people. Section 215 of the Patriot Act empowers FBI agents to go to any library or bookstore and demand a list of what people have borrowed or bought — or even what people have asked about.

As part of a terrorist investigation, the FBI need not have any evidence of wrongdoing, only a blanket authorization from the Foreign Intelligence Surveillance Court (FISC), which never holds public hearings and always grants the government’s request for search warrants and other intrusions.

The Patriot Act nullified federal, state and local laws protecting the privacy of library users and bookstore customers from federal agents. Within months after 9/11, federal or local lawmen had already visited nearly 10 percent of the nation’s public libraries “seeking September 11-related information about patron reading habits,” according to a University of Illinois survey.

The Patriot Act gags librarians and bookstore employees, prohibiting them from disclosing to targeted individuals that the FBI is probing their literary proclivities. Many librarians are protesting the new policies.

Libraries in Santa Cruz, Calif., posted warnings to their patrons informing them that the Patriot Act “prohibits library workers from informing you if federal agents have obtained records about you. Questions about this policy should be directed to Attorney General John Ashcroft, Department of Justice, Washington, D.C. 20530.”

Dale Canelas, library director at the University of Florida at Gainesville, observed: “Just because you read a book about explosives, doesn’t mean you’re going to blow something up.”

Justice Department spokesman Mark Corallo continually seeks to blunt criticism of the library searches by misrepresenting the law. He told the Florida Today newspaper: “This is limited only to foreign intelligence. U.S. citizens cannot be investigated under this act.”

But when FBI agents get warrants to sweep up all the names of someone who borrowed or bought a specific book, there is no way for libraries or bookstores to segregate the names of American citizens from foreign agents before satisfying the government’s demands.

Mr. Corallo told the San Francisco Chronicle that before an FBI agent gets library or bookstore records, he must “convince a judge that the person for whom you’re seeking a warrant is a spy or a member of a terrorist organization. The idea that any American citizen can have their records checked by the FBI, that’s not true.”

But the Patriot Act assures that the unsubstantiated assertion by an FBI agent is enough to start vacuuming up names. All that is necessary for a rubber stamp search warrant is for a federal agent to assert that the records are “sought for” an on-going terrorism investigation.

Justice Department chief spokeswoman Barbara Comstock asserted July 30: “Section 215 provides for thorough congressional oversight. Every six months, the attorney general is required to `fully inform’ Congress on the number of times agents have sought a court order under section 215, as well as the number of times such requests were granted, modified or denied. While this information is classified, Congress has been fully informed about how many times this provision has been used.”

But the Justice Department’s concept of “fully inform” is little more than a one-page memo listing the number of search warrants secured from the FISC with no details about how many people were searched as a result of each warrant, how many records were confiscated and how many people were gagged and prevented from disclosing that their library or bookstore had surrendered information in response to a federal warrant.

How much of a right to deceive the public do government officials deserve in the name of anti-terrorism? None of the false statements about library searches have anything to do with preserving national security — only with protecting the image of the Justice Department and FBI. There is no need to give federal agents an unlimited right to rummage in Americans’ lives in order to stop further al-Qaida attacks.

James Bovard is the author of Terrorism and Tyranny: Trampling Freedom, Justice and Peace to Rid the World of Evil, forthcoming from Palgrave MacMillan 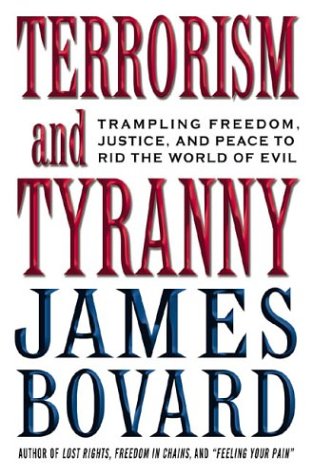