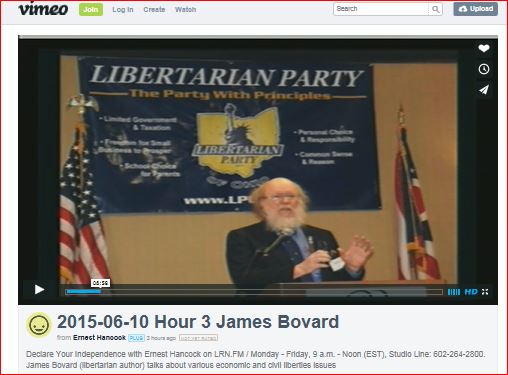 FreedomsPhoenix Chief Hellraiser Ernie Hancock and I had a rollicking hour this morn on his Liberty Radio Network program. Plenty of federal agencies took a whupping. I alternated at times between admitting that “I don’t know shit” about some ongoing controversy & striving to “draw the Curtain of Mercy” on other topics.

Ernie had excellent observations on the Rand Paul campaign. Apparently, he has been courted to throw his support behind them like he did for Ron Paul in 2008 and 2012 (Ernie’s “Revolution” campaign spurred massive youth support for Ron Paul). But Ernie has the impression that Rand is triangulating his positions and relying too much on focus groups rather than the hardline principles that drove his father’s campaigns. Ernie’s goal is to sway far more people to “free your mind” and political action is usually a delusory path to that goal. I mentioned that much of the media’s coverage of the Rand’s @filibuster on the Patriot Act was more critical of the opponents of federal surveillance than of the NSA crime wave.

Ernie asked if there were any rays of hope on the horizon. I said it was encouraging how young people in Turkey rose up against the government after they were brutally suppressed in demonstrations 2 years and toppled the prime minister’s party – thanks in part to their social media activism.

He asked about the reaction to Operation Jade Helm in Washington. I said that folks around here don’t give a rat’s patooie about it and assume that anyone who is concerned is a rube or paranoid.

Ernie opened up with a lot of questions on the FDA war on cigars. I mentioned that, when folks see me smoking, they often ask me if I was smoking a Cuban cigar. I explain that freelance writers are not allowed to smoke Cuban cigars. I have not smoked that many Cubans over the years, but most of those I have fired up have been inferior to relatively cheap (and mild) Dominican stogies. I mentioned that in the 1990s, when cigars became high status, some guys would hold cigars in a way so people could see the fancy brand band on the cigar. Those are the kind of dweebs who would benefit from the FDA’s proposal to largely exempt $10+ cigars from regulation.

I mentioned that if I am smoking cigars, it is rare for people to come up and proselytize to me – except about the evil of smoking. And for those folks, a single puff of smoke usually sends them on their way.  Another bright side: for every day that I smoke cigars instead of doing cocaine, I save $500.

Ernie asked about a couple recent articles that have gone viral. I said that that was thanks to the effort of good folks who would retweet or post ’em on Facebook – which I greatly appreciated.

Ernie asked my view on the U.S. dollar and currency crises.  I prefaced my response: “It’s always a bad move for people to take financial advice from a college dropout.”