from the Future of Freedom Foundation –

After the San Bernardino massacre late last year, Barrack Obama made a rare speech from the Oval Office. His most memorable line was his declaration that “freedom is more powerful than fear.” That epigram might have made John F. Kennedy’s speechwriters beam. But it is ludicrous to hear such a comment from a president who has spent almost seven years fear-mongering to promote one federal power grab after another.

Obama has done more than any other president to sway Americans to perceive all guns owners as dire threats to public safety. He declared last December that “Congress should act to make sure no one on the No Fly list is able to buy a gun.” That is a subtle gesture to equate gun owners with terrorists. His proposal is especially perilous to freedom because his administration is placing innocent Americans on the No Fly list solely on the basis of a hunch that they might some day commit violence. If Congress enacts Obama’s proposal, then the absurd judgments of one government agency would provide a license to ravage victims’ other constitutional rights.

The White House dragged its feet on admitting that the San Bernardino massacre was a terrorist attack, preferring instead to exploit it to promote anti-gun legislation. Obama sounded the bugle from the Oval Office for restrictions (if not bans) on so-called assault weapons — which many liberals define to include any semi-automatic weapon. Americans own more than 35 million semi-automatic firearms. Even though it would be impossible to confiscate all those firearms, maligning tens of millions of gun owners wins Obama brownie points from the media.

Obama perennially invokes the threat of terrorism to cloak illegal government surveillance. When former government contractor Edward Snowden exposed how the National Security Agency was ravaging Americans’ privacy, Obama responded by portraying any threat to the federal data vacuum cleaners as preemptive surrender to terrorist cabals. This past May, when Congress dallied before renewing the USA PATRIOT Act, Obama issued an apocalyptic warning:

“Heaven forbid we’ve got a problem where we could have prevented a terrorist attack … but we didn’t do so simply because of inaction in the Senate.” But even Obama’s own personally selected panel of experts found no evidence that the NSA’s illicit wiretaps had stopped any domestic terrorist attacks.

In the same speech, Obama signaled that he believes that new threats justify government restrictions on the use of private encryption of email: “I will urge high-tech and law-enforcement leaders to make it harder for terrorists to use technology to escape from justice.” He apparently believes that permitting any American to use software that federal agents cannot surveil will doom us all. But the Founding Fathers would be aghast at the suggestion that politicians have a right to read every citizen’s mail.

Any American who flies domestically can suffer abuse thanks to Obama’s perennial fear-mongering on terrorist threats to airlines. After federal officials failed to detect a plot by the so-called underwear bomber in late 2009, Obama authorized the Transportation Security Administration to become far more aggressive and intrusive. He declared in 2010 that he had asked TSA for assurances that “what we’re doing is the only way to assure the American people’s safety.” He made his comment shortly after the TSA began pressuring Americans to go through Whole Body Scanners that radiated them while taking birthday-suit photos that could end up who-knows-where. TSA screeners also began groping people far more vigorously, as if any unsqueezed family jewel might be a plastic explosive. But Obama was utterly deferential to the agency regardless of the howls of protest across the land.

Obama has continued providing a red carpet for any abuse that the TSA wants to foist upon Americans. Commenting last November on the downing of a Russian airliner over the Sinai peninsula, he declared, “I think there is a possibility that there was a bomb on board, and we’re taking that very seriously.” But if someone is looking for protection from bombs, the TSA is the last bunch of wizards to consult. The TSA’s bomb detectors are routinely triggered by hand sanitizers, soap, and other commonly used items. When the inspector general tested the TSA’s Whole Body Scanners and TSA screeners, the TSA failed to detect 96% of the guns and mock explosives that IG agents smuggled past them. But as long as Obama administration officials can invoke vague threats, Americans’ Fourth Amendment right to be free of warrantless, unreasonable searches while traveling is null and void.

Obama has played the fear card to justify dropping an “iron curtain” of secrecy around government abuses. Early in his administration, he justified suppressing thousands of photos of U.S. forces abusing detainees in Iraq because “releasing these photos would inflame anti-American opinion and allow our enemies to paint U.S. troops with a broad, damning, and inaccurate brush, thereby endangering them in theaters of war.” But in the same speech, he declared that “individuals who violated standards of behavior in these photos have been investigated and they have been held accountable…. Nothing has been concealed to absolve perpetrators of crimes.” But the White House and the Pentagon covered up a massive cache of evidence of wrongdoing, much of it involving torture. Obama’s action helped pave the way for the cover-up of his drone attacks abroad — since disclosing the evidence that innocent civilians have been killed would have done nothing but stir up hostility to the U.S. government and Americans.

More recently, the White House invoked similar apprehensions to successfully squelch the publication of the vast majority of the Senate Intelligence Committee’s report on CIA torture, including masses of evidence of CIA deceit and criminality. (Obama’s Justice Department previously effectively absolved all of the Bush administration torture policymakers.) At this point, the only people in the world who are unaware of U.S. torture practices are American citizens. “Willful blindness” was not one of the traits the Founding Fathers recommended for the success of representative government in America.

The Obama team has also played the fear card to drag the nation much deeper into foreign quagmires. After ISIL began circulating videotapes of beheadings of captives, the Obama administration exploited the resulting revulsion and fear to vastly expand U.S. intervention in Syria. Obama boasted last December that “we will continue to provide training and equipment to tens of thousands of Iraqi and Syrian forces fighting ISIL on the ground.” But the Pentagon recently conceded that, after spending $41 million on training, fewer than half a dozen U.S.-prepared Syrian rebels were on the battlefront. Obama promised 16 times that he would never put “boots on the ground” in Syria. But when he recently decided to send U.S. troops there, administration officials sought to exonerate him by whooping up the threat of ISIS. The White House apparently believed that new fears absolved the commander in chief for double-crossing the American people.

Fear has been a staple of Obama’s efforts to expand federal control over Americans’ daily lives.

When Congress was considering the Affordable Care Act, Obama and his officials repeatedly vastly exaggerated the number of Americans without access to health care. They sought to sway Americans to believe that the only alternative to the president’s plan was to permit millions of Americans to suffer horribly, perhaps dying in the street. In his 2010 State of the Union message, Obama invoked “families — even those with insurance — who are just one illness away from financial ruin.” His fretting was complemented by his administration’s exploiting gullible viewers. Jonathan Gruber, one of the architects of Obamacare, explained that one provision of the law was included because “the American people are too stupid to understand the difference.”

Obama promised that his health-care program could expand coverage and curtail spending. There was no way to simultaneously increase demand and slash costs except by destroying freedom. Millions of Americans’ health-insurance policies have been canceled as a result of Obamacare. Americans without federally approved health insurance policies are being hit with hundreds of dollars of penalties. 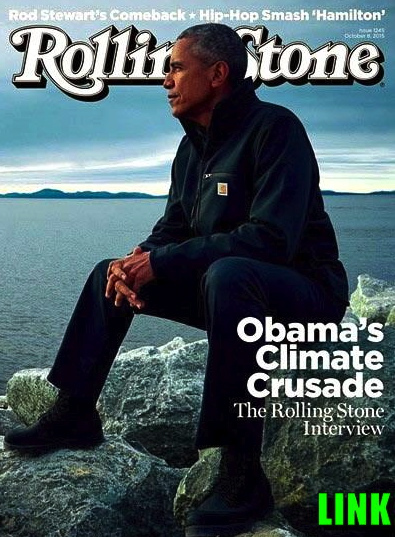 Obama’s rhetoric on climate change is fear-mongering at its best. In a September speech in Alaska, he warned that without radical economic and environmental policy changes, “we will condemn our children to a planet beyond their capacity to repair: Submerged countries. Abandoned cities. Fields no longer growing.” Obama has perennially thrown out alarmist numbers of the potential economic impact of global warming. But while he talks as if climate change is a self-evident truth and his iron-fisted cure is the only possible solution, his administration is refusing to disclose key data from its top climate-research agency to House Republicans who suspect the administration is fudging numbers to promote his agenda. Regardless of whether one believes that climate change poses a threat to our future, Obama’s alarmism is the worst way to craft an effective response.

Presidential panic buttons corrode American democracy. The routine fanning and exploitation of vague fears is no way to run a polity. Unfortunately, recent administrations have merely confirmed H.L. Mencken’s adage: “The whole aim of practical politics is to keep the populace alarmed and hence, clamorous to be led to safety — by menacing it with an endless series of hobgoblins.”

Bogus fears can produce real servitude. The more fears government fans, the fewer people will recall the danger of government itself. And as long as enough people can be frightened, then all people can be ruled.

Obama is correct that freedom is potentially more potent than fear. But that has not stopped the president from pushing the fear button any time he found it politically profitable. And it remains to be seen whether freedom is more powerful than presidential fearmongering.

This article was originally published in the March 2016 edition of Future of Freedom.

Thanks to Linas Garsys of the Washington Times for the art work at the top.