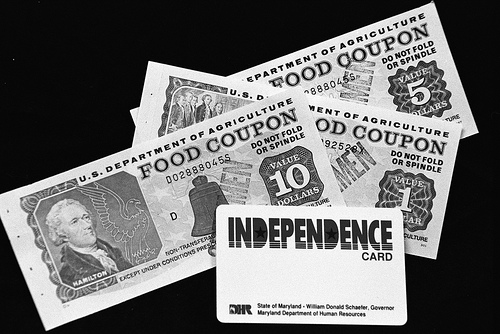 People on food stamps have ligitimate [sic] needs: Your Say

The government paying for people’s food is socialism. However, the government choosing the allowed food to buy with food stamps is communism (government determines need). It’s surprising how quickly conservatives abandon free-market economics when it comes to the needy.

Most food stamp recipients live in low-income areas that tend to be “food deserts.” When you don’t have access to better grocery stores with better food selection, your diet tends to be of lesser quality. It’s easy for those on the outside to not really understand the reality of the situation.

JB:+++ The “food desert” thesis has been debunked by numerous economists and by an experiment in Philadelphia. Regardless, five states are now permitting recipients to use food stamps to order food for delivery via Amazon Prime.  I will be curious to see what they purchase (unless USDA tries to treat that information as a “State Secret”).

James Bovard’s column, “Donald Trump’s budget slashes government junk food pipeline to the poor,” is every bit as good as the GOP fix for health care. Most of the recipients of the food stamp program are children, the elderly, the disabled or the mentally ill. However, Bovard claims that if we cut another $193 billion out of the program over 10 years, it’ll force lazy food stamps recipients to find work.

Former first lady Michelle Obama tried to get better access to healthy food in poor areas, but that effort has been dropped by the Republicans. She tried to improve school nutrition, but the current administration brought junk food back to the schools and now Bovard claims food stamps cause obesity. Twisting reality up to blame the victims of poverty for their situation is a Republican tenet. But poverty is not a lack of responsibility or a lack of work ethic, it’s a lack of money. A federal minimum hourly wage of $10.10 like Barack Obama proposed would move many food stamp recipients off the program, without inhumanity and moral bankruptcy.

JB:****  It is easier to prate about “moral bankruptcy” than to respond to an academic/medical study revealing that food stamp recipients are twice as likely to be obese as low-income people who pay for their own food.

Gannett News Service syndicated the article and it was reprinted in papers around the nation.  Here is a letter to the editor from the Asbury Park Press:

LETTERS: Cuts to SNAP program another handout for rich

The headline of James Bovard’s oped, “Budget slashes junk food pipeline to the poor,” is both misleading and disingenuous. The goal of the budget cut is to reduce spending, not to improve the food choices of Supplemental Nutrition Assistance Program (SNAP) recipients.

It’s subtle, but this is another example of governmental support for the 1 percent. The wealthy pad their incomes by underpaying their employees while we taxpayers feed their workers. Living minimum wage levels and government programs to educate and train poorer Americans for meaningful employment should supplement the SNAP program. This surely will not occur with the Trump administration.

JB**** What is the point of “meaningful employment” when policies permit able-bodied people to collect food stamps without even attempting to find a job?

One Response to USA TODAY Letters Expose my Communist Tendencies