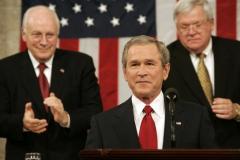 From the Mises Institute –

Former President George W. Bush gave a speech yesterday implicitly slamming President Donald Trump for dragging down democracy. Bush told political cronies and other attendees: “We are gathered in the cause of liberty this is a unique moment.” He assured listeners that freedom “should be the defining commitment of our country, and the hope of the world.” Bush invoked the “high ideals” of our nation, declaring, “We become the heirs of James Madison by understanding the genius and values of the U.S. Constitution.”

After the speech, much of the media exalted Bush as if he were the second coming of George Washington. Twitter showcased the spiel with an unusual summary in its “trending tweets” lineup – “George W. Bush gve a powerful speech on democracy, freedom, and American values.”

If Bush had never been president, it would be easier to understand the adulation. But Bush was one of the most disastrous, authoritarian presidents in modern American history. Bush committed more abuses of power than could be recounted in anything less than a book. But there was one issue which should forever define Bush in Americans’ memory.

After the 9/11 attacks, Bush’s lawyers quickly assured him that the Constitution and federal law no longer constrained the president’s power. Bush proceeded to authorize the type of torture regime that civilized nations had formally abandoned hundreds of years earlier.

The CIA constructed an interrogation regime by “consulting Egyptian and Saudi intelligence officials and copying Soviet interrogation methods,” the New York Times reported. Thanks to Bush’s orders, U.S. government abuses ranged from endless high-volume repetition of a “Meow Mix” cat food commercial at Guantanamo, to tearing out toenails in Afghanistan, to compulsory enemas for recalcitrant prisoners, to beating people to death in Iraq and kicking them to death outside Kabul, and to illegally sending detainees to foreign governments to be tortured by proxy and creating a system of “ghost prisoners” worthy of a banana republic. A secret legal opinion authorized CIA interrogators to engage in head slapping, waterboarding, frigid temperatures, and manacling for many hours in stress positions. CIA interrogators often did not speak the language of detainees so they compensated by beating hell out of them. Psychologists aided the torture regime, offering helpful hints on how to destroy the will and resistance of prisoners.

Monty Python was the Bush administration’s patron saint for judicial proceedings. “Evidence” gained via coercion was admissible as long as a military judge deigned that the methods used did not quite rise to torture. Military commissions could accept “evidence” produced by interrogations that violated “cruel, unusual or inhumane treatment” standards as long as such abuses occurred before Dec. 30, 2005, when Congress passed the Detainee Treatment Act. (Bush effectively vetoed this law with a signing statement.) The Military Commissions Act, which Bush railroaded through Congress in 2006, created farcical proceedings that resembled a 1938 Moscow show trial. Defense attorneys could “challenge the use of hearsay information obtained through coercive interrogations [torture] in distant countries only if they can prove it is unreliable,” the Washington Post noted. But it was almost impossible to disprove an accusation when a defense lawyer was not allowed to question or perhaps even know who made the charge.

When Bush was pressed in an interview by NBC’s Matt Lauer in 2006 about the use of brutal interrogation methods, he replied, “Whatever we have done is legal…. We had lawyers look at it and say, ‘Mr. President, this is lawful.’” But Bush’s legal lackeys also proclaimed that the president’s dictates were the highest law thanks to the “commander-in-chief override” of the Constitution. In December 2008, the Senate Armed Services Committee released a report (largely ignored by the media) proving that the torture abuses originated at the highest levels of the Bush administration. The report stated that “senior officials in the United States government… redefined the law to create the appearance of legality.”

In 2010, Bush’s memoir, Decision Points, hit the streets and Americans could read firsthand the former president bragging about ordering torture. Bush wrote that when he was requested to approve the CIA’s waterboarding of Khalid Sheikh Mohammed, he responded, “Damn right.” Six months before his memoir was released, in a speech in Grand Rapids, Michigan, he told the audience, “Yeah, we water-boarded Khalid Sheikh Mohammed. I’d do it again to save lives.” But there is no evidence that tortured saved any Americans’ lives. Actually, torture helped send 4000+ Americans to their death in Iraq, since the Bush administration relied on false confessions gained via torture to justify toppling Saddam Hussein. The United States had classified waterboarding as torture since the Spanish American War, and the U.S. government had classified waterboarding as a war crime since 1947. Bush’s torture policies may have been based on the dictum of Richard Nixon: “When the president does it, that means that it is not illegal.”

The Bush torture scandal shows what happens when politicians and political appointees are permitted to redefine barbarism out of existence. Thanks to Bush, U.S. law failed to prevent federal tyranny after 9/11. The only CIA official prosecuted in the torture scandal was John Kiriakou, a heroic whistleblower. The fact that federal courts dismissed a barrage of torture lawsuits against top Bush administration officials and torture policymakers is one of the great disgraces of the American judiciary.

Bush concluded his speech yesterday by declaring, “Right now, one of our worst national problems is a deficit of confidence. But the cause of freedom justifies all our faith and effort.” Bush did more than anyone in this century to destroy Americans’ and the world’s confidence in the U.S. government. Bush is correct that freedom justifies great effort to defend. But freedom will be doomed if we permit its enemies to masquerade as its protectors.