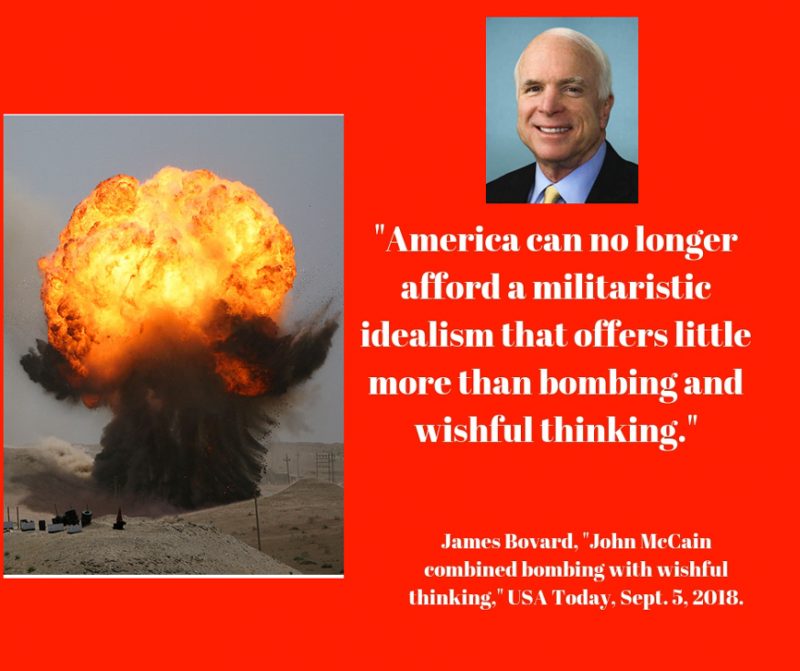 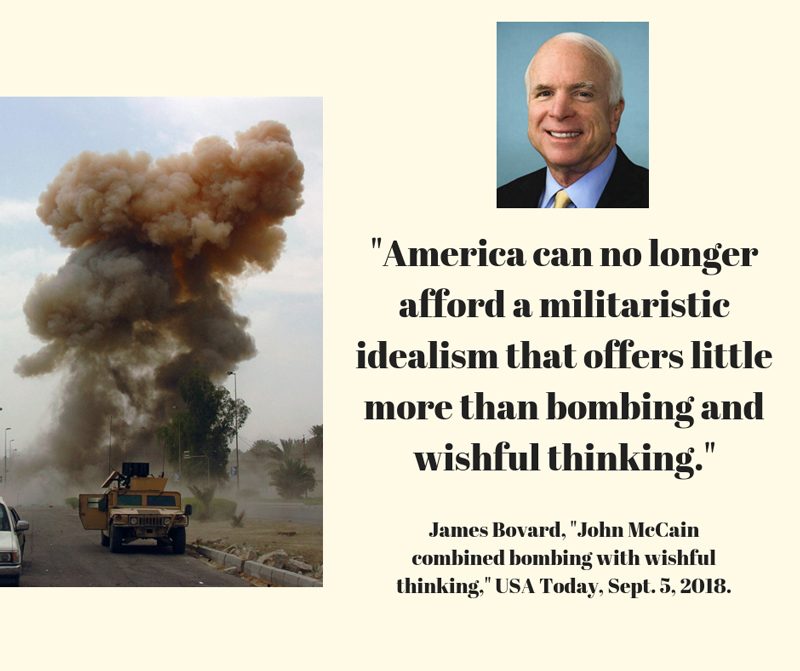 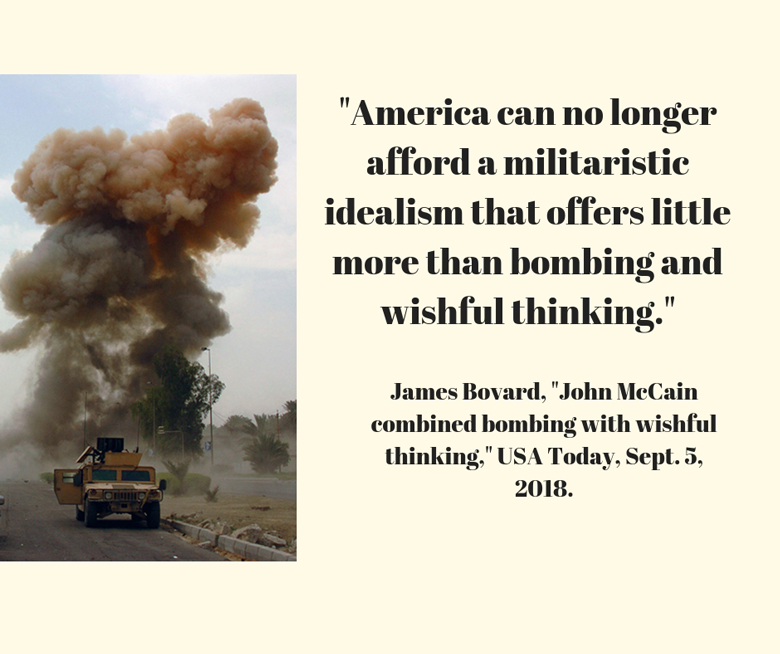 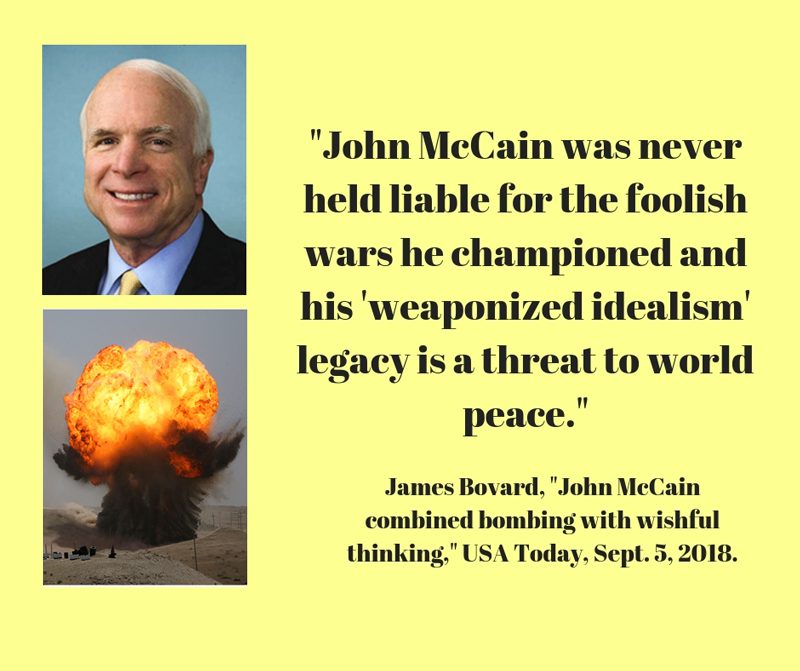 John McCain combined bombing with wishful thinking. We should learn from his mistakes.

John McCain has been lauded for his service, but his military crusades were rooted more in rhetoric than realism. They have failed to spread democracy.

The late Sen. John McCain is being lauded far and wide for his long career of public service.  Rep. John Lewis, the famous civil rights activist, hailed McCain as a “warrior for peace.” In reality, McCain embodied a mix of moralism and militarism that worked out badly for America and the world.

When he was awarded the Liberty Medal last October at the National Constitution Center in Philadelphia, McCain declared, “We live in a land made of ideals… We are the custodians of those ideals at home, and their champion abroad. We have done great good in the world.”  He warned that it would be “unpatriotic” to “abandon the ideals we have advanced around the globe.” But idealism has fared better in political speeches than in the lives of American soldiers or purported foreign beneficiaries.

Crusades that were righteous but not realistic

McCain was first elected to Congress in 1983 and, during the 1990s, “slowly moved toward the idealist camp and became one of his party’s foremost advocates for the use of force abroad,” the Boston Globe noted. In his 2000 presidential campaign, he pledged a “rogue state rollback,” which sounded like “fill-in-the-blank” declarations of war against any regime the United States disapproved. He was defeated in the Republican primaries by George W. Bush, who sounded reasonable and moderate in comparison. However, after 9/11, Bush adopted McCain’s bellicose vision and promised to “rid the world of evildoers.”

McCain was one of the most foremost advocates of attacking Iraq and served as honorary co-chairman of the Committee for the Liberation of Iraq. In 2002, he declared that invading that nation would be “fairly easy” and that “we can win an overwhelming victory in a very short period of time.” Two months after the fall of Baghdad, McCain proclaimed that the war was “fully vindicated.”

Perhaps McCain’s faith in his ideals blinded him to political venality. When Bush created a pseudo-independent commission in 2004 to examine the failures regarding missing Weapons of Mass Destruction in Iraq, he selected McCain as one of the nine members. On the day his appointment was announced, McCain publicly vindicated Bush even before the evidence came in: “The president of the United States, I believe, would not manipulate any kind of information for political gain or otherwise.” McCain’s declaration of faith tacitly ignored the presidential deceits that spurred the Mexican-American War, the Spanish-American War of 1898, the First World War, and the Vietnam War.

Facts were sometimes not permitted to impede McCain’s righteous crusades. He was ridiculed as “the new Baghdad Bob” who took a “magic carpet ride” after he visited a Baghdad market in 2007 and claimed “Never have I been able to go out into the city as I was today.” (Rep. Mike Pence, who accompanied McCain, ludicrously asserted that the scene was “just like any open-air market in Indiana in the summertime.”)

At the time, he was wearing a flak jacket, accompanied by 100 U.S. troops, and protected overhead by attack helicopters. After McCain departed, Iraqi merchants scoffed at his claims that the market was safe. Despite claiming vast progress, he declared in 2008 that it was “fine with me” to keep U.S. troops in Iraq for “a hundred years.”

The Iraq war showed that the media would valorize almost any politician who urged attacking purported bad guys. In 2011, McCain was outspoken in demanding U.S. bombing of Libya — widely considered the biggest foreign policy blunder of the Obama administration. Yet he had sung a different, conciliatory tune two years earlier when he visited Tripoli.  At that time McCain met with officials of Moammar Gaddafi’s regime and “pledged to see what he could do to move things forward in Congress” regarding a Libyan request for U.S. military equipment, according to a confidential U.S. embassy cable disclosed by Wikileaks.

McCain returned to the Middle East for an encore visit with Syrian rebels in 2013, who he then ceaselessly boosted as a moderate alternative to the regime of Bashar Assad. Under pressure from McCain and others, the Obama administration provided massive military aid to anti-Assad forces, but much of the weaponry ended up in the hands of terrorist groups. The absurdity of U.S. policy became undeniable when Pentagon-backed Syrian rebels openly battled CIA-backed rebels.

Most of the American media ignored McCain’s role in making the Syrian conflict longer and bloodier than it otherwise would have been. This is no surprise since politicians are perennially absolved by the ideals they invoke. But the moral bonus points are void beyond the national borders. Idealistic pretenses can spur vast resentment because “the American judges himself by the way he feels, whereas the foreigner judges him by what he does,” as Irving Babbitt explained after World War One.

McCain’s career illustrates the peril of exalting uplifting rhetoric over the lessons of history. There are plenty of nasty dictators in the world but U.S. military campaigns have dismally failed to spread democracy this century. America can no longer afford an idealism that consists of little more than combining bombing and wishful thinking.