Was doing a Google search today and surprised to see my 1985/1990 New York Times oped on Bankrupt Environmentalism listed as one of the first responses in the New York Times search engine on environmentalism. I thought everybody had forgotten about that particular heresy.  (The piece originally appeared in 1985, thanks to editor Robert Semple, and was reprinted in a special 1990 roundup of pieces from the first 20 years of the op-ed page.) Unfortunately, environmental policy continues to often be little more than piety-sanctified boondoggles. 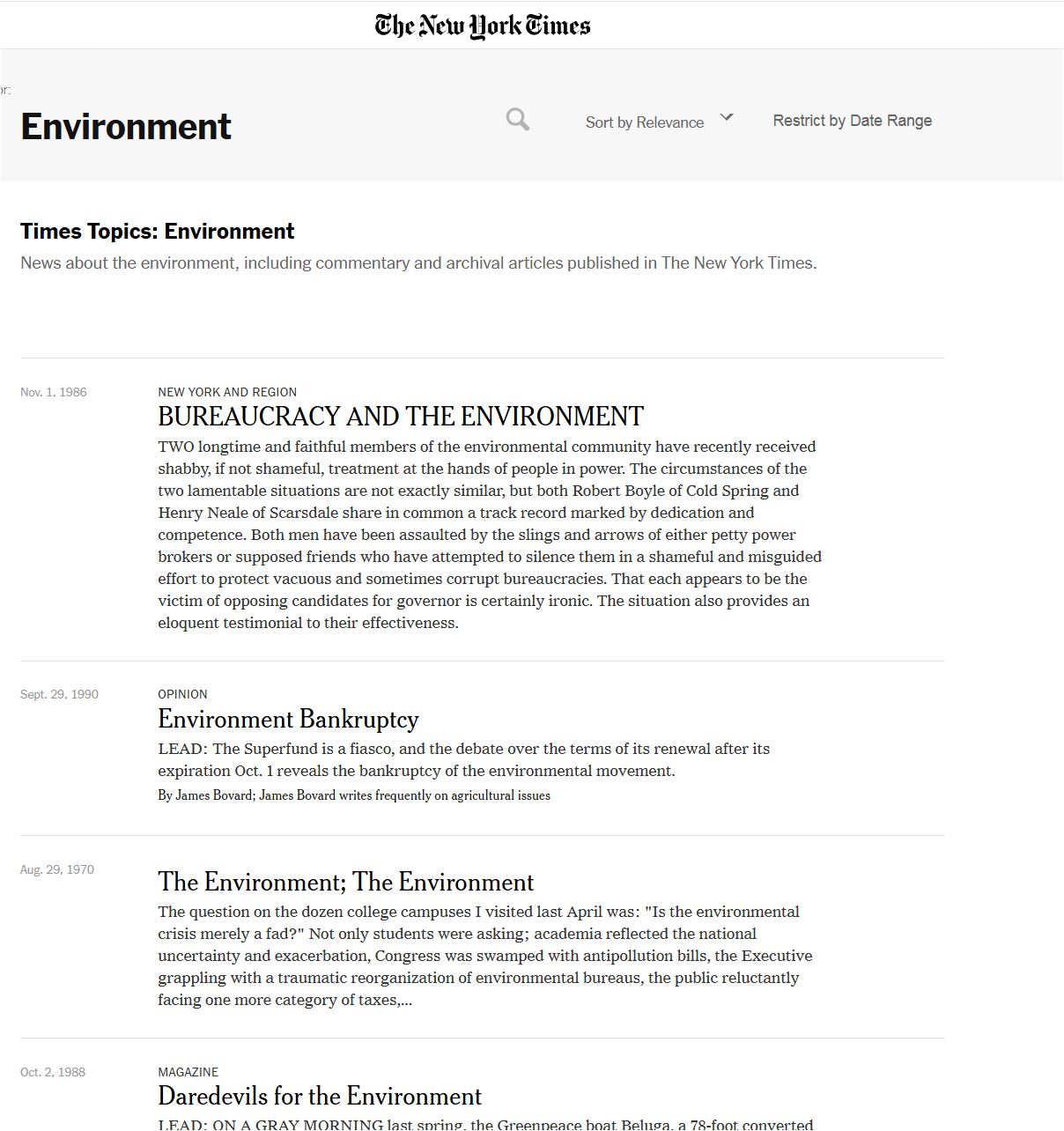 Here’s the text: (1990 version was an extract of the 1985 piece, which was roughly twice as long. Haven’t found that one online; will keep fishing and also dive into my archive chaos for hard copy of the original)

The Superfund is a fiasco, and the debate over the terms of its renewal after its expiration Oct. 1 reveals the bankruptcy of the environmental movement.

The environmental lobbies seem to have acquired many of the worst traits of the defense lobby. In the same way that being pro-defense is often an excuse to neglect cost overruns and badly built weapons, being pro-environment is, increasingly, a license to disregard the failure of anti-pollution programs.

The Environmental Protection Agency has cleaned up only six out of thousands of hazardous-waste sites, and the five-year, $1.6 billion Superfund, designed to finance this cleanup, instead has primarily spawned bumper crops of planning, administering and litigating. The fund has done little or nothing to protect the public health.

Even as the defense lobby is often co-opted by defense contractors, the environmental movement is being co-opted by the public-works lobby and pork-barrel politics: at a recent Congressional hearing, a hot issue was whether states would continue receiving Superfund grants two years after their last hazardous-waste site was sanitized.

Environmentalists seem incapable of learning from their mistakes. Their great cause of the 1970’s – the Clean Water Act of 1972 – is a landmark of ineffectiveness.

Government and private corporations spent $120 billion complying with it; yet, the Association of State and Interstate Water Pollution Control Administrators reports that only 11 percent of surface water streams are cleaner now than in 1972. The act was characterized by a pork-barrel approach, infatuation with ”best available technology” and utopian standards (zero discharge of pollutants).

The Superfund program repeats almost all the mistakes of the Clean Water Act – and, so far, is equally unproductive.

If we really want the biggest bang for the buck, we should focus on the largest sources of broad-based pollution: the runoff of pesticides, fertilizers and eroded soil from farms. It makes no sense to scrub clean one pollution threat while totally ignoring another major problem.

Environmentalists have become good Washingtonians, more concerned about spending money for a good cause than actually solving a problem. Hazardous-waste sites are indeed dangerous, but it will take more than good intentions and lofty rhetoric to meet the challenge.

That 1985 piece spurred a denunciation from the Sierra Club:

HEADLINE: Wise and Timely Use of Cleanup Funds Is Environmentalist Goal

BODY:
To the Editor:

James Bovard completely misrepresents the environmentalist position on
toxic-waste control by claiming (”Bankrupt Environmentalism,” Op-Ed, July 10)
that we advocate nothing more than throwing money at the problem. To the
contrary, since environmentalists began supporting Superfund legislation in the
1970’s, we have endorsed an approach that integrates an adequate Superfund
budget with a sensible cleanup schedule and effective cleanup standards.
The New York Times, July 22, 1985

That is why we object to passage by the House Subcommittee on Commerce,
Transportation and Tourism of H.R. 2817, a bill that almost doubles the Reagan
Administration’s fund request, but obliterates any Environmental Protection
Agency responsibility for spending the money wisely or in a timely fashion. In
fact, H.R. 2817 would allow the E.P.A. to authorize cleanups that violate the
standards established under other Federal pollution-control laws. It would also
prevent states from imposing more stringent standards than those set by the
E.P.A. And H.R. 2817 would not require the agency to clean up sites any faster
than the snail’s pace of the last five years.

Mr. Bovard clearly has an ax to grind when it comes to pollution control. His
claim that the Clean Water Act is ”a landmark of ineffectiveness” is without
merit. According to the 1982 national water-quality inventory report to
Congress, progress has been made in water-pollution control in 21 states, while
no states reported trends in water-quality degradation. And the National Stream
Quality Accounting Network, which is operated by the U.S. Geological Survey,
reported that ”large-scale degradation of the nation’s streams has been
stopped, even though both population and industrial activity have increased.”
Pollution control is not only a dire necessity, but it also works.

The Sierra Club and other conservation organizations accept responsibility
for the development of cost-effective programs and policies that respond to
The New York Times, July 22, 1985

increasingly complex environmental problems. This forward thrust has been
demonstrated by the club’s own programs and by the recent release of ”An
Environmental Agenda for the Future,” prepared jointly by the leaders of the
environmental community. I commend this report to Mr. Bovard and all who share
our concern for environmental quality.

Podcast: How a Mother and Blind Daughter Taught Santa the Meaning of Christmas
Video Montage of My 2018 Quotes