Some USA Today readers apparently assumed that I was “Antifa in drag”…. 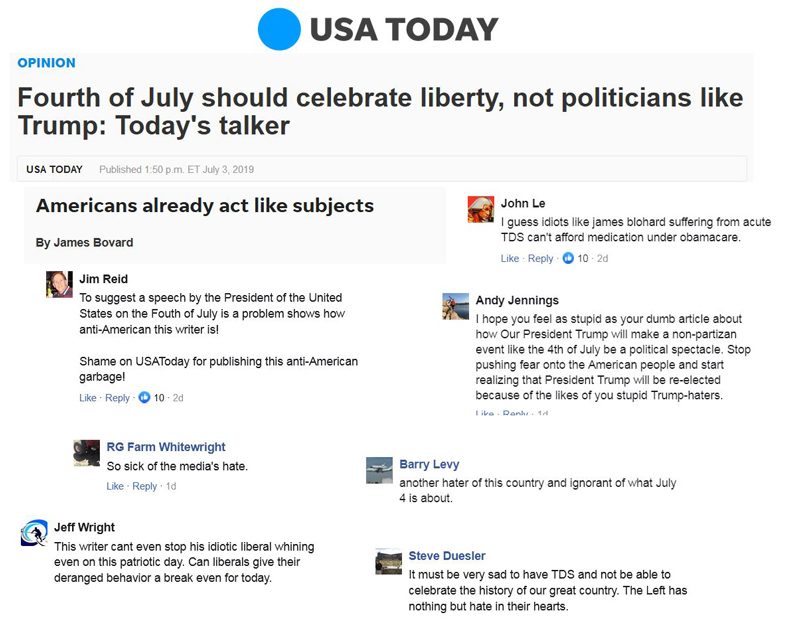 Fourth of July should celebrate liberty, not politicians like Trump

President Donald Trump’s plan to give an Independence Day televised address from the Lincoln Memorial has outraged many pundits and plenty of normal Americans, too. There has rarely been a shortage of political buncombe on July Fourth but Trump could, as usual, break all records.

For Trump’s extravaganza, the Pentagon is bringing out of mothballs some World War II-era Sherman tanks. Though the gun turrets look impressive, Allied soldiers nicknamed Sherman tanks “Ronsons” because they were death traps that “light first every time” in clashes with better built German tanks. But that painful fact, like many others, will be swept under the rug.

The Washington Post condemned Trump’s “gaudy display of military hardware that is more in keeping with a banana republic than the world’s oldest democracy.” Regrettably, the Post’s indignation over a few tanks does not extend to the fact that American troops are now fighting in 14 foreign nations. But the real problem is not the military relics; it’s exalting government power and politicians on a day meant to celebrate individual liberty. The Fourth of July in Washington has been going downhill ever since 9/11.

In his first draft of the Declaration of Independence, Thomas Jefferson scratched out the word “subjects” and replaced it with “citizens.” But on Independence Day 2003, I wondered whether that had been an editing error. I saw long lines of people awaiting outside government checkpoints around the National Mall, kowtowing for permission to celebrate independence according to the latest edicts. Police and security agents continue to have a far heavier presence in Washington and many other places than in earlier times. Three years ago, police urged people heading for the National Mall on July Fourth to sign up for a free emergency text alert system called NIXLE. (Subtext: “All your email addresses belong to us!”)

How many Americans recall that the Fourth of July originally consecrated independence achieved thanks to resistance to a corrupt, oppressive regime? Facebook, that bellwether of cluelessness, last year censored a Texas newspaper’s reposting of a portion of the Declaration of Independence because it went against its standards on hate speech.

The Founding Fathers carved the First Amendment to ensure freedom of the press after the crown’s appointees muzzled criticism of King George’s regime. The Second Amendment,  recognizing the right to keep and bear arms, was spurred by British troops seeking to seize firearms at Lexington and Concord, Massachusetts. The Fourth Amendment prohibits unreasonable searches because British agents with general warrants would ransack any colonist’s house. The Fifth Amendment’s eminent domain provision was written after British agents claimed a right to seize without compensation any pine tree in New England for British navy ship masts.

Nevertheless, the battles our forefathers fought to secure our rights have long since been forgotten amidst a deluge of abuses at the federal, state and local government level. There are good reasons why less than 20% of Americans trust the federal government nowadays.

The hubbub around Trump’s speech should spur Americans to take their Fourth of July to higher ground. What matters is not what politicians say on any given day but the principles and values that Americans choose to live by. Regardless of how often government agents violate the Constitution, citizens retain all the rights for which our forefathers fought.

Federal Judge Learned Hand warned in 1944: “Liberty lies in the hearts of men and women; when it dies there, no constitution, no law, no court can save it.”

On this Fourth of July, Americans should nourish that spirit of liberty by taking a long walk, drinking a good beer, or maybe simply giving a hearty verbal thrashing to the politician of your choice.