I was on the Future of Freedom Foundation panel at Freedom Fest in Las Vegas.  Jacob Hornberger, Richard Ebeling, and I had fun trying to rev (rile?) up the audience regarding the ongoing destruction of liberty.   What the heck – some audiences don’t like jokes about the TSA or hitchhiking. Folks did enjoy the gun control riff, including jibes at Rep. Eric “Nuke Idaho” Swalwell.

Here is the final riff from that speech.  It was a coin toss whether to include that spiel.  Never trust a Vegas coin toss:

This is the 40th anniversary of my first visit to Vegas. I got here in 1979 after hitchhiking almost 24 hours straight out of Denver. Almost didn’t make it – came real close to getting arrested by a Colorado state trooper – me and Rodney Dangerfield – NO RESPECT. Way out in the sticks of western Colorado, where tumbleweeds were the only company, I didn’t see any billboards announcing, “Bovard, don’t hitchhike on the interstate” so I figured maybe it was OK. Heck there were almost no cars on that road so there was no safety issue.

Next car that comes along is a State trooper who pulled over with his lights flashing. What followed was another in a long series of “What the hell is wrong with you, boy?” moments in my early life. When that trooper started questioning me, I used the same “dumb ass routine” that proved invaluable when I was interrogated for hours 8 years later by East German border guards. I finally made it to the Colorado-Utah border where I hustled at a gas station and caught a 500 mile ride with a young businessman who was revved on amphetamines. He dropped me off here the next morn, where I savored a 99 cent steak and egg breakfast, spent a few hours sniffing around, and then hitchhiked on to Los Angeles.

It never occurred to me that I would be coming back to this city decades later to talk about freedom. …. FORTY YEARS down the road – I have less hair but I’m better dressed now – except for the same ol’ railroad engineer cap. 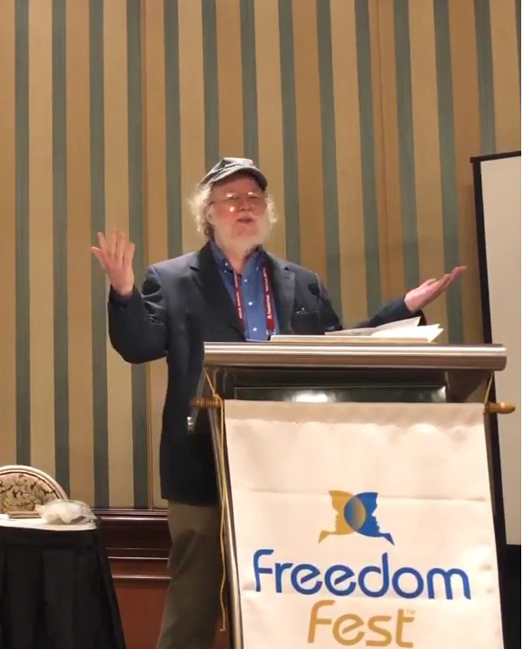