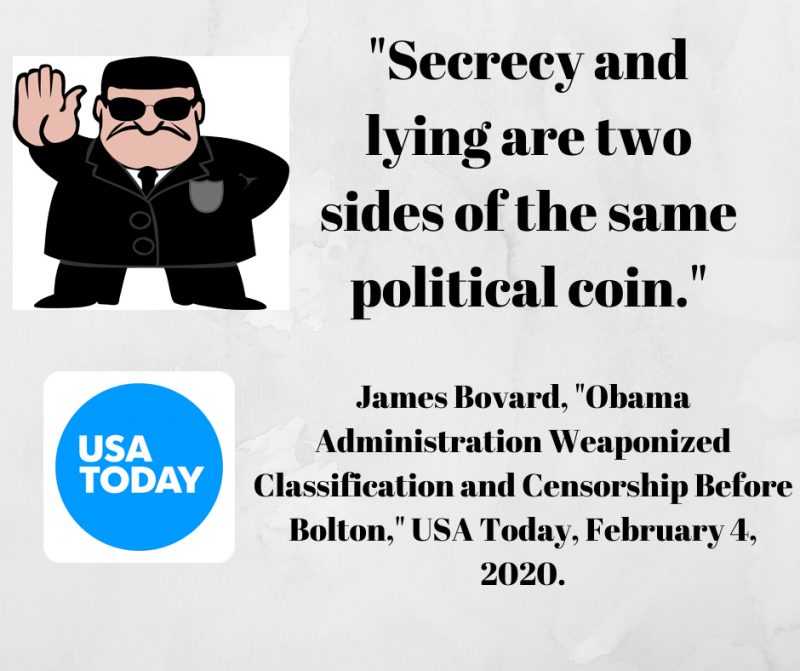 What is classified? It all depends on the politicians. Long before Bolton, the Obama White House used classification as a tool of censorship.

Ever since the 9/11 attacks, Republicans and Democrats have conspired to keep Americans increasingly ignorant of what the federal government does. The number of secret federal documents skyrocketed, and any information classified was treated like a political holy relic that could not be exposed without dooming the nation. Ironically, the fate of the Trump presidency may hinge on perpetuating the unjustifiable secrecy now pervading Washington.

John Bolton wrote a book about his experiences as President Donald Trump’s national security adviser that could provide key information regarding Trump’s dealing with the Ukrainian government, and Democratic members of Congress are calling for the manuscript to be made public. Former government officials are obliged to submit their publications for review to ensure that no classified information is revealed. Bolton’s lawyer denies that the book contains classified information, but previous manuscript reviews of other would-be authors have dragged out for months or years.

Since the 1990s, the number of classified documents annually by federal agencies has increased more than 15 times.

In 2004, then-Rep. Chris Shays, R-Conn., derided the federal classification system as “incomprehensibly complex” and “so bloated it often does not distinguish between the critically important and the comically irrelevant.”

The New York Times reported in 2005 that federal agencies were “classifying documents at the rate of 125 a minute as they create new categories of semi-secrets bearing vague labels like ‘sensitive security information.’ “

Each classified document is tacitly backed by a federal iron fist ready to squash anyone who discloses it without permission. Regardless of whether the Trump White House is conniving to stifle Bolton’s disclosures, it was the Obama White House that weaponized classification. J. William Leonard, former chief of the federal Information Security Oversight Office, complained in 2011 that the Obama administration had “criminally prosecuted more leakers of purportedly classified information than all previous administrations combined.”

The Obama administration believed that its classification decrees were so sacrosanct, no federal judge could overturn them. “We don’t think there is a First Amendment right to classified documents,” Justice Department lawyer Catherine Dorsey told a federal judge in 2015.

Dorsey agreed that the government’s position was tantamount to claiming that the court “has absolutely no authority” to unseal evidence even if it’s clear the government’s bid to keep it secret is based on “irrationality” or that it’s “hiding something,” as The Intercept reported.

Classification is also a literary scourge. Hundreds of thousands of former officials and military personnel with security clearances must allow pre-publication reviews of their books and other writings. Former Justice Department lawyer Jesselyn Radack observed that pre-publication review “has always been a filter to promote fawning memoirs by senior government officials while censoring whistleblowers and critics.”

A 2019 lawsuit claimed that the pre-publication censorship vested excessive power in government officials who, according to The New York Times, “can delay or discriminate against lower-ranking people who criticize government actions, while speedily clearing favorable memoirs and other writings by retired senior officials.”

Classification: A convenience for politicians to dominate media

Torturers have benefited mightily from censorship. Mark Fallon, a veteran counterintelligence officer and counterterrorism expert, wrote a book entitled  “Unjustifiable Means: The Inside Story of How the CIA, Pentagon and U.S. Government Conspired to Torture.” But his account of the torture regime was badly delayed and heavily censored. Fallon charges that books by the architects and apologists for CIA torture — including former CIA Director George Tenet, former acting general counsel John Rizzo and former Counterterrorism Center chief Jose Rodriguez — were treated better in the pre-publication process.

Similarly, when former FBI counterterrorism agent Ali Soufan wrote a book on CIA torture abuses, the CIA demanded that Soufan — who was on-site for brutal interrogations — remove the pronouns “I” and “me” from his narrative. The CIA also deleted quotes in his book that had appeared in congressional hearing transcripts.

Classification is often a political flag of convenience that politicians exploit to dominate the media. New York Times columnist Maureen Dowd observed in 2006, “The entire Iraq War was paved by (Bush administration) leaks. Cheney & Co. were so busy trying to prove a mushroom cloud was emanating from (Saddam Hussein’s) direction, they could not leak their cherry-picked stories fast enough.”

Bush administration disclosures of sensitive information were often handed on a silver platter to pliant journalists. Newsweek’s Richard Wolffe explained the Bush White House method: “They declassify when they feel like it. I’ve been with senior administration officials who have just decided to declassify something in front of me because it’s bolstering their argument.”

But Republicans and Democrats in Washington have long since approved denying Americans the facts millions of times a year. Unfortunately, secrecy and lying are often two sides of the same political coin.