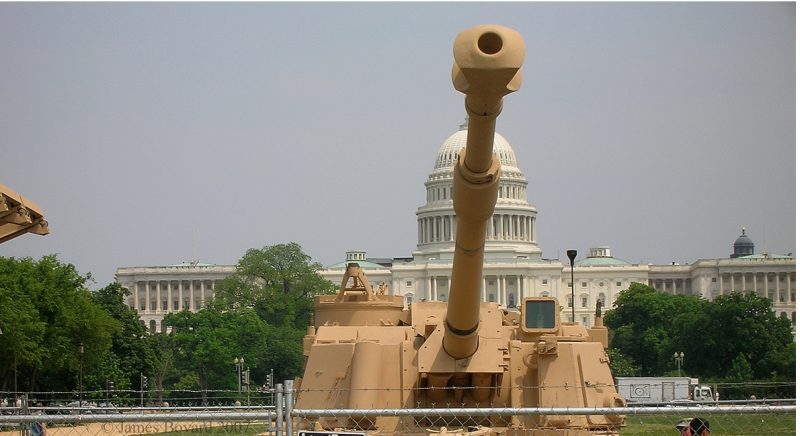 Giving the military total power would be a political nuclear bomb, provoking more unrest than we have now.

President Trump may be veering closer to declaring martial law in response to rioting in many cities across the nation. On Saturday, Trump warned “the Federal Government will step in and do what has to be done, and that includes using the unlimited power of our Military and many arrests.”  On Monday,  Trump declared that if cities or states refuse sufficiently defend the life and property of their residents, “I will deploy the United States military and quickly solve the problem for them.”

Even the Washington Post concedes that Trump “has the legal authority to deploy active-duty military personnel to states to help quell violent protests” though experts warn such a move “would probably generate strong pushback from some state and local officials.” According to a survey released Tuesday by Political Polls, Americans support “calling in the U.S. military to supplement city police forces” by a 58 percent to 30 percent margin. But any support could quickly vanish if deploying troops resulted in significant casualties of innocent civilians.

Trump could send in U.S. troops under the Insurrection Act if a governor requested aid. Prior to sending in troops, Trump would be required to  issue a proclamation to “immediately order the insurgents to disperse and retire peaceably to their abodes within a limited time,” according to the law.

Many frenzied activists presume that there is no difference between the Insurrection Act and martial law. Under the Insurrection Act, U.S. troops would still be assisting in enforcing laws under state and local authority. A formal declaration of martial law, on the other hand,  effectively suspends civil liberties and gives all authority to the military.

The current round of rioting would be much more constitutionally perilous if not for one  intransigent U.S. senator during the Bush administration. Amazingly, Congress passed a law 14 years ago that made martial law practically a push-button perk of presidents.

In 2006, Congress voted almost unanimously to entitle  President George W. Bush and any subsequent president to effectively declare martial law largely as a matter of bureaucratic convenience. Many of the current Democratic leaders in the House and Senate were part of that surrender-without-a-fight civil liberties debacle.

After the Federal Emergency Management Agency’s disastrous response to Hurricane Katrina in 2005, the Bush administration pushed Congress to make it far easier for a president to declare martial law to avoid similar public relations debacles. An August 2006 White House press release decried “the equivalent of a weapon of mass effect being used on the city of New Orleans.” “Weapon of mass effect” sounded like the rhetorical equivalent of computer-generated images in a low-budget movie. But that vaporous phrase helped stampede cowardly congressmen facing reelection a few months later.

On September 30, 2006, Congress passed the Defense Authorization Act of 2006, a $500 billion, 591-page bill that included a few paragraphs razing a key constraint on presidential power. Almost 200 years earlier, Congress had passed the Insurrection Act to severely curtail the president’s ability to deploy the military within the U.S., a law that was further buttressed by the Posse Comitatus Act of 1878. But there was a loophole: the Posse Comitatus Act was waived if the president invokes the Insurrection Act.

Section 1076 of that 2006 law deleted the name “Insurrection Act” and replaced it with  “Enforcement of the Laws to Restore Public Order Act.” The 2006 “reform” effectively authorized martial law declarations in response to a “natural disaster, epidemic, or other serious public health emergency, terrorist attack or incident, or other condition”—and such “condition” was neither defined nor limited. A smattering of pipe bomb explosions could satisfy the “other condition”—as could the bomb explosions used last night to rob up to 10 ATM machines in Philadelphia. The 2006 law also empowered the president to commandeer the National Guard of any state to send to another state for up to 365 days—part of the reason why every governor in the nation opposed the “reform.”

Liberal Democrats heartily supported this frontal assault on the Rule of Law: the provision was co-written by Sen. Carl Levin (D-MI) and openly endorsed by Sen. Ted Kennedy (D-MA). The only senator to vigorously protest the bill was Patrick Leahy (D-VT), who warned that “we certainly do not need to make it easier for Presidents to declare martial law.” He groused in the Congressional Record: “Using the military for law enforcement goes against one of the founding tenets of our democracy.” “Martial law” is a euphemism for military dictatorship—a situation where anyone who disobeys soldiers’ orders can be shot. Martial law effectively waives constitutional rights.

The media and most of Capitol Hill ignored or cheered Section 1076 when it was enacted. (The American Conservative was one of the few places to howl about the law.) Five months later, a New York Times editorial criticized the new law for “making martial law easier.” The editorial implied that the law had “been passed in the dead of night”—as if 50 governors, a senior senator from Vermont, and a bevy of activists had never voiced their opposition.

In early 2008, after Democrats recaptured control of Congress, Sen. Leahy pushed through a provision repealing Section 1076 and restoring prior safeguards. But it was astounding that almost all congressional Democrats signed off on conferring such power on Bush at the same time that liberals were routinely denouncing him as a dictator. Unfortunately, that is standard operating procedure on Capitol Hill where most members are grossly negligent on almost all constitutional issues, despite their press releases to the contrary.

Trump may be threatening to invoke the Insurrection Act to browbeat governors to deploy more National Guard units and to sway mayors to more effectively suppress looting rampages. The rampages last night were lighter in most locales compared to the weekend, excepting a few places such as New York City. (Governor Andrew Cuomo condemned Mayor Bill de Blasio today for failing to curb looting last night and again sought permission to send in National Guard troops.) Private citizens in some places are stepping up to fill the void left by AWOL police, creating a rising peril that pillagers will be shot. And the rioters may finally be realizing that iPhones they plundered are little more than paperweights since Apple easily zaps stolen phones.

The Insurrection Act was last invoked in 1992 by President George H.W. Bush in response to Los Angeles riots that, as Kelley Vlahos noted here yesterday, had left 60 people dead, burnt down 3,700 buildings, and inflicted a billion dollars in damage. The carnage in recent days in has ravaged many entrepreneurs and some neighborhoods but there will likely be a hundred times more businesses that perish because of the pandemic shelter-in-place orders imposed by governors than by the rioters.

If Trump uses the Insurrection Act to send in U.S. troops into states and cities across the nation, he will “own” any subsequent carnage that the military fails to prevent. Formally invoking the Insurrection Act risks spurring renewed or fresh uprisings in many places that have simmered down. That could lead to greater pressure for a formal declaration of martial law. As Joseph Nunn of the Brennan Center for Justice explained, “The concept of ‘martial law’ is not well understood, let alone defined, in American law. It usually refers to military forces taking over the functions of ordinary civilian government. The key words are ‘taking over.’”

Will the Trump administration be so foolish as to presume that their military commanders could miraculously take over and maintain order in cities that have not enjoyed good governance for decades? Martial law would be a political nuclear bomb that would provoke far more of the vehement protests that the Trump administration is seeking to quell. Perhaps even worse, martial law would be an  “Antifa Relief Act” that spurred far more valorizing of vicious vandals.