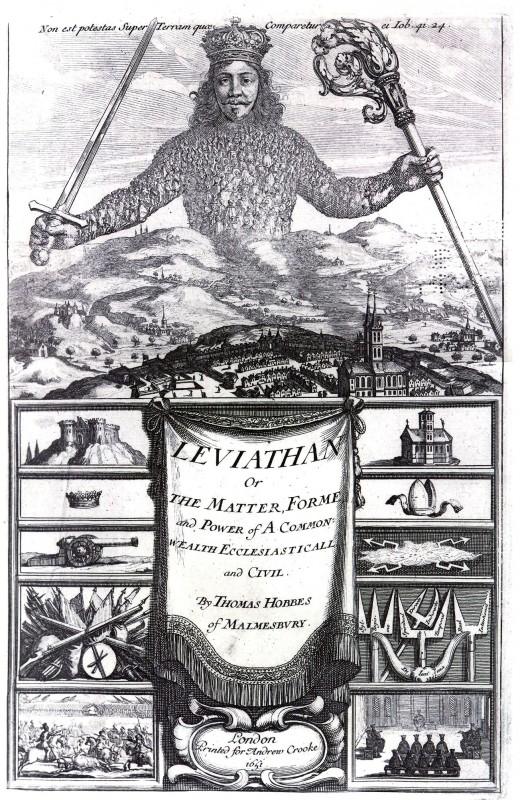 Almost 400 years ago, English philosopher Thomas Hobbes wrote a book scoffing at tyrannophobia—the “fear of being strongly governed.” This was a peculiar term that Hobbes invented in Leviathan, since civilized nations had feared tyrants for almost 2000 years at that point. But over the past 150 years, Hobbes’ totalitarianism has been defined out of existence by apologists who believe that government needs vast, if not unlimited power. Hobbes’ revival is symptomatic of the collapse of intellectuals’ respect in individual freedom.

Writing in 1651, Hobbes labeled the State as Leviathan, “our mortal God.” Leviathan signifies a government whose power is unbounded, with a right to dictate almost anything and everything to the people under its sway. Hobbes declared that it was forever prohibited for subjects in “any way to speak evil of their sovereign” regardless of how badly power was abused. Hobbes proclaimed that “there can happen no breach of Covenant on the part of the Sovereign; and consequently none of his subjects, by any pretense of forfeiture, can be freed from his subjection.”

Hobbes championed absolute impunity for rulers: “No man that hath sovereign power can justly be put to death, or otherwise in any manner by his subjects punished.” Hobbes offered what might be called suicide pact sovereignty: to recognize a government’s existence is to automatically concede the government’s right to destroy everything in its domain. Hobbes sought to terrify readers with a portrayal of life in the “state of nature” as the “war of all against all” that made even perpetual political slavery look preferable. John Locke, in his Second Treatise of Government published a few decades later, scoffed at Hobbes’ “solution”: “This is to think that men are so foolish that they take care to avoid what mischiefs may be done them by polecats and foxes, but are content, nay think it safety, to be devoured by lions.” As Charles Tarlton, a professor at the State University of New York in Albany, noted in a superb 2001 article in The History of Political Thought, Hobbes “despotical doctrine” rests upon “an absolute and arbitrary political power joined with a moral demand for complete, simple and unquestioning political obedience and, second, the concept that no action of the sovereign can ever be unjust or even criticized.”

Hobbes’ treatise succeeded in making “Leviathan” the F-word of political discourse. In the century after Hobbes wrote, there was rarely any doubt about the political poison he sought to unleash. David Hume, writing in his History of England declared that “Hobbes’s politics were fitted only to promote tyranny.” Voltaire condemned Hobbes for making “no distinction between kingship and tyranny … With him force is everything.” Jean Jacques Rousseau condemned Hobbes for viewing humans as “herds of cattle, each of which has a master, who looks after it in order to devour it.”

Hobbes’ views were derided as long as political thought was tethered to the Earth. Unluckily for humanity, philosophers found ways to sever ties to both history and reality. The most influential political philosopher of the 19th century may have been Germany’s G.W.F. Hegel. Hegel proclaimed, “The State is the Divine Idea as it exists on earth” and is “the shape which the perfect embodiment of Spirit assumes.” Hegel also declared that “the State is … the ultimate end which has the highest right against the individual, whose highest duty is to be a member of the State.” Hegel had a profound influence on both communism (via Marx) and fascism. Political scientist Carl Friedrich observed in 1939, “In a slow process that lasted several generations, the modern concept of the State was … forged by political theorists as a tool of propaganda for absolute monarchs. They wished to give the king’s government a corporate halo roughly equivalent to that of the Church.”

By the twentieth century, as Tarlton noted, “Hobbes’s interpreters and commentators had worked to make Hobbes’s appalling political prescriptions more palatable.” Experts scoffed at “tyrannophobia” because they believed tyrants were necessary to “fix” humanity.

Hobbes’ revival in America was aided by John Dewey, probably the philosopher with the most impact on public policy in the first half of the 20th century. In 1918, Dewey shrugged off Hobbes’ affection for despotism: “Undoubtedly a certain arbitrariness on the part of the sovereign is made possible, [it] is part of the price paid, the cost assumed, in behalf of an infinitely greater return of good.” And why presume “an infinitely greater return of good”? Because the government would be following the prescriptions of Dewey and his intellectual cronies. Two years earlier, Dewey championed government coercion as a social curative: “No ends are accomplished without the use of force. It is consequently no presumption against a measure, political, international, jural, economic, that it involves a use of force.” Dewey declared that “squeamishness about [the use of] force is the mark not of idealistic but of moonstruck morals.”

Two decades later, Dewey discovered utopia during a visit to Moscow and proclaimed that the Soviet people “go about as if some mighty, oppressive load had been removed, as if they were newly awakened to the consciousness of released energies.” Dewey had no qualms about the artificial famine that Stalin caused in the Ukraine that killed more than five million peasants. Perhaps Dewey agreed with Stalin: “One death is a tragedy, a million deaths a statistic.”

President Franklin Roosevelt never invoked Hobbes but his Hobbesian approach to power made FDR a darling of the intelligentsia. In his first inaugural address, FDR called for a Hobbesian-like total submission to Washington: “We now realize… that if we are to go forward, we must move as a trained and loyal army willing to sacrifice for the good of a common discipline, because without such discipline no progress is made, no leadership can become effective.” The military metaphors and call for everyone to march in lockstep was similar to rhetoric used by European dictators at the time. Roosevelt sometimes practically portrayed the State as a god. In his 1936 acceptance speech at the Democratic National Convention, he declared, “In the place of the palace of privilege we seek to build a temple out of faith and hope and charity.” In 1937, he praised the members of political parties for respecting “as sacred all branches of their government.” In the same speech, Roosevelt assured listeners, in terms Hobbes would approve, “Your government knows your mind, and you know your government’s mind.”

As governments throughout the western world seized vastly more power, British professors took the lead in consecrating Hobbes. In 1938, on the eve of World War Two, British philosopher A.E. Taylor wrote an influential book that bizarrely proclaimed “that, in spite of his absolutist leanings, what Hobbes is trying to express by the aid of his legal fictions is the great democratic idea of self-government.” Eight years later, Michael Oakeshott, one of favorite British philosophers of American conservatives, hailed Leviathan as “the greatest, perhaps the sole masterpiece of political philosophy written in the English language.” Oakeshott assured readers that “we need not greatly concern ourselves” about critics who warned of Hobbes’ dark side because Hobbes’ vision “could never amount to despotism.” Signaling the total vanquishing of classical liberal interpretations, a major academic review of recent writings on Hobbes declared in 1982 that “seeing Leviathan as tyranny is now only to be found in new editions of old books.”

In the United States, many liberals display a Hobbesian love of vast government power.

University of Chicago professor Stephen Holmes gushed in his 1995 book, Passions and Constraint: On the Theory of Liberal Democracy: “It now seems obvious that [contemporary Statist] liberalism can occasionally eclipse authoritarianism as a technique for accumulating political power…. For good or ill, liberalism is one of the most effective philosophies of state building ever contrived.” Holmes hailed Hobbes as a “pre-liberal”—which makes as much sense as touting Hitler as a “post-liberal.”

“Leviathan” has long since lost its onus among the academic elite. In 2012, Princeton University professor John Ikenberry’s Liberal Leviathan: The Origins, Crisis, and Transformation of the American World Order was published. The publisher, Princeton University Press, summarized the book: “In the second half of the twentieth century, the United States engaged in the most ambitious and far-reaching liberal order building the world had yet seen. This liberal international order has been one of the most successful in history.” Tell that to the Iraqis, Afghans, Libyans, Somalians, and many other victims of U.S. foreign policy. Writing recently in the Washington Post, DePaul University political science professor David Lay Williams hailed Leviathan as “perhaps the greatest work of political philosophy ever written in English.” Williams is finishing a book titled, The Greatest of All Plagues: Economic Inequality in Western Political Thought, so perhaps he favors tyranny as the cure for inequality.

Especially since 9/11, America has suffered presidents who acted entitled to Hobbesian-levels of unlimited power. Bush administration lawyers secretly decided that neither federal law nor the Constitution could limit the power of the president, who was even entitled to declare martial law in America at his whim. President Barack Obama promised to restore civil liberties but vastly expanded illegal surveillance, bombed seven nations, boosted drone attacks by 500%, and claimed a prerogative to kill American terror suspects without a trial. President Donald Trump proclaimed earlier this year, “When somebody is President of the United States, his authority is total.” Trump neglected to clear his statement with the ghost of James Madison, the father of the Constitution.

The issue here is not the reputation of one long-dead philosopher but the seachange in verdicts on tyranny. The more powerful government becomes, the more homage Leviathan receives from professors and pundits. Will average citizens recognize the folly of a bunch of intellectual lemmings plunging over a cliff?  As Professor Tarlton warned, “The theory of Hobbes is a theory of unadulterated despotism, or it is nothing.” Is it too much to ask the champions of despotism to cease pretending to be friends of liberty?

After 30 Years, Did the Disabilities Act Work?
Political Legitimacy Dies in 2020