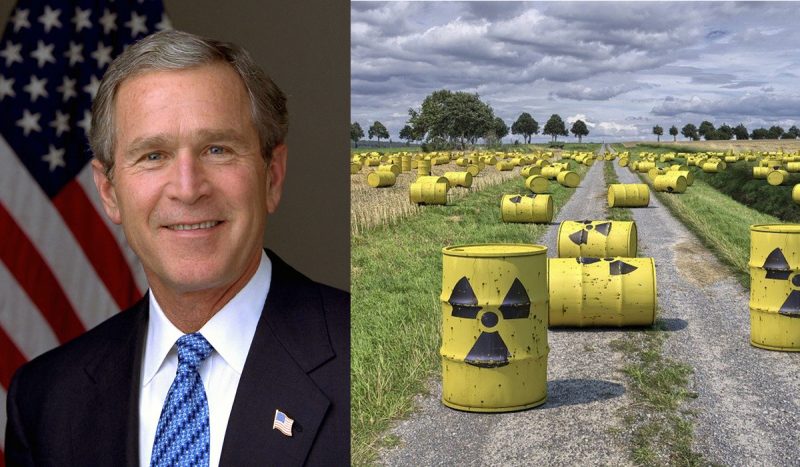 Thanks to Pixabay & rabedirkwennigsen / 25 for toxic waste photo

Future of Freedom Foundation, September 2009
George W. Bush is gone from Washington but his legacy, like an abandoned toxic waste dump, lingers on. Like President Franklin Roosevelt before him, President Bush helped redefine American freedom. And like Roosevelt’s, Bush’s changes were perversions of the clear vision the Founding Fathers bequeathed to us.What did freedom mean in the era of George Bush? In Iraq in September 2004, the U.S. military constructed Camp Liberty, a tent compound to house Iraqi detainees next to the Abu Ghraib prison. (The torture scandal and photos had been revealed in late April.) Maj. Gen. Geoffrey Miller declared that Camp Liberty and other changes in the treatment of Iraqi prisoners were “restoring the honor of America.”“Camp Liberty” was typical of the rhetorical strategy of the Bush administration: empty words in lieu of basic decency and honest dealing.

From the beginning, President Bush invoked freedom to sanctify his war on terrorism. In his Oval Office address on the night of September 11, 2001, Bush declared, “America was targeted for attack because we’re the brightest beacon for freedom and opportunity in the world.” He pronounced authoritatively on the motives of the attackers even before the FBI and CIA knew their identities. He never offered evidence that that was al-Qaeda’s prime motivation.

Bush rarely missed a chance to proclaim that the war on terrorism was being fought to save freedom — either U.S. freedom, or world freedom, or the freedom of future generations. In 2002, he proclaimed, “We are resolved to rout out terror wherever it exists to save the world for freedom.” He contrasted freedom and terror as if they were the two ends of a seesaw. Because terror is the enemy of government, government necessarily becomes the champion of freedom. But this simple dichotomy made sense only if terrorists were the sole threat to freedom.

Once Bush proclaimed that freedom was his goal, then all opponents automatically became enemies of freedom. In the first presidential candidates’ debate with Sen. John Kerry in 2004, Bush explained away the fierce opposition to the U.S. military in Iraq: “They’re fighting us because they’re fighting freedom.”

In 1776, “Let Freedom Ring” was a response to the ringing of the Liberty Bell after the signing of the Declaration of Independence. In contrast, those attending the 2004 Republican National Convention waved signs proclaiming, “Let Freedom Reign.” That was the phrase that Bush scrawled on a piece of paper in June 2004 when National Security Adviser Condi Rice informed him that sovereignty in Iraq had been transferred to Iyad Allawi, the former CIA operative Bush had chosen to head Iraq’s government. Supposedly, it took only a mere signing of a piece of paper by the U.S. occupation authority for Iraqis to have sovereignty — even though an American puppet remained at the head of the government, and even though U.S. military forces continued bombarding civilians in cities throughout the country.

For Bush, military power was practically freedom incarnate. He informed Congress in 2002 that the “Department of Defense has become the most powerful force for freedom the world has ever seen.” In his 2002 State of the Union address, after bragging about victories in Afghanistan, he proclaimed, “We have shown freedom’s power.” In an April 2003 speech to workers at the Army Tank Plant in Lima, Ohio, he declared, “You build the weapons you build here because we love freedom in this country.”

For Bush, the Pentagon budget was perhaps the clearest measure of America’s devotion to freedom. At an April 9, 2002, Republican fundraiser in Connecticut, he bragged that “my defense budget is the largest increase in 20 years. You know, the price of freedom is high, but for me it’s never too high because we fight for freedom.” And if the government seized all of every citizen’s paycheck — instead of only 38 percent of it — and used all the revenue to bankroll foreign military conquests, Americans would have absolute freedom.

Bush often spoke as if all he needed to do was pronounce the word “freedom” and all humanity was obliged to obey his commands. He declared in July 2003 that, because of U.S. military action in Iraq, people were “going to find out the word ‘freedom’ and ‘America’ are synonymous.” Freedom, Iraqi-style, apparently meant giving the U.S. military the right to kill tens of thousands of innocent civilians and to obliterate the core of cities such as Fallujah. But the details of U.S. action in Iraq were irrelevant because of the transcendent goal Bush perennially proclaimed.

In his 2004 acceptance speech at the Republican National Convention, Bush declared, “I believe in the transformational power of liberty: The wisest use of American strength is to advance freedom.” That was a formal renunciation of much of what America had once stood for. James Madison, the father of the Constitution, warned in 1795, “Of all enemies to public liberty war is, perhaps, the most to be dreaded because it comprises and develops the germ of every other.” But, from Bush’s view, U.S. military aggression is as much a force for liberation as any political or religious ideology ever claimed in the past.

Bush declared on the first anniversary of the 9/11 terrorist attacks that “there is a line in our time … between the defenders of human liberty, and those who seek to master the minds and souls of others.” But if the United States claims the right to attack the people of any foreign regime that refuses to swear allegiance to the latest U.S. definition of freedom or democracy, the world will see America as the aggressor shackling the minds and wills of people around the world.

The more nations that America attacks in the name of liberty, the more foreigners will perceive America as the greatest threat both to their peace and self-rule. Not surprisingly, Bush’s policies resulted in a collapse in the world’s respect for the United States.

In the 18th century, “The Restraint of Government is the True Liberty and Freedom of the People” was a common American saying.

But for President Bush, freedom had little or nothing to do with limits on government power. Bush told a high-school audience in 2002, “I will not let — your Government’s not going to let people destroy the freedoms that we love in America.” In a 2003 speech at the Bonaparte Auditorium at FBI headquarters in Washington, Bush declared, “For years the freedom of our people were [sic] really never in doubt because no one ever thought that the terrorists or anybody could come and hurt America. But that changed.” Homeland Security Director Tom Ridge reflected the attitude of the Bush administration when he announced, “Liberty is the most precious gift we offer our citizens.” If freedom is a gift from the government to the people, then government can take freedom away at its pleasure.

Respect for individual rights is the bulwark of freedom. Bush proudly declared in 2003, “No president has ever done more for human rights than I have.” But, in order to defeat terrorists, he claimed the right to destroy all rights by using the “enemy combatant” label. Justice Antonin Scalia rightly noted in 2004, “The very core of liberty secured by our Anglo-Saxon system of separated powers has been freedom from indefinite imprisonment at the will of the Executive.” But this was a luxury that American could no longer afford, at least according to the administration. The Bush administration fought tooth and nail to preserve the president’s boundless power to strip people of all rights on the basis of his mere assertion. The administration continually dragged its feet with respect to obeying Supreme Court decisions that limited the president’s power.

The Founding Fathers sought to protect freedom by creating a government of laws, not of men. But Bush freedom required the president to rise above federal law. The Justice Department advised the White House that the president’s power to authorize torture was not constrained by the federal statute book because of “the President’s inherent constitutional authority to manage a military campaign against al-Qaeda and its allies.” Justice Department memos from Bush’s first term (released this past March) make it stark that the president’s brain trust believed that the Constitution was as archaic and irrelevant as a covered wagon.

On the home front, Bush freedom meant “free speech zones” where demonstrators were quarantined to avoid tainting presidential photo opportunities. Bush freedom meant allowing the National Security Agency to vacuum up Americans’ email without a warrant. Bush freedom meant entitling the Justice Department to round up the names of book buyers and library users under the USA PATRIOT Act.

Bush freedom was based on boundless trust in the righteousness of the rulers and all their actions. Bush offered Americans the same type of freedom that paternalist kings offered their subjects in distant eras. But Bush’s supposedly lofty intentions were no substitute for the Constitution and the rule of law.

Freedom must not become simply another term for politicians to invoke to consecrate their power. Rather than stirring patriotic pride, Bush’s invocations of freedom should have set off Americans’ warning bells. It remains to be seen how much lasting damage he has done to Americans’ vocabulary and political understanding.

This article originally appeared in the September 2009 edition of Freedom Daily.

9/11 and the Mirage of American Democracy
Photos from D.C. Antiwar Rally September 11, 2021