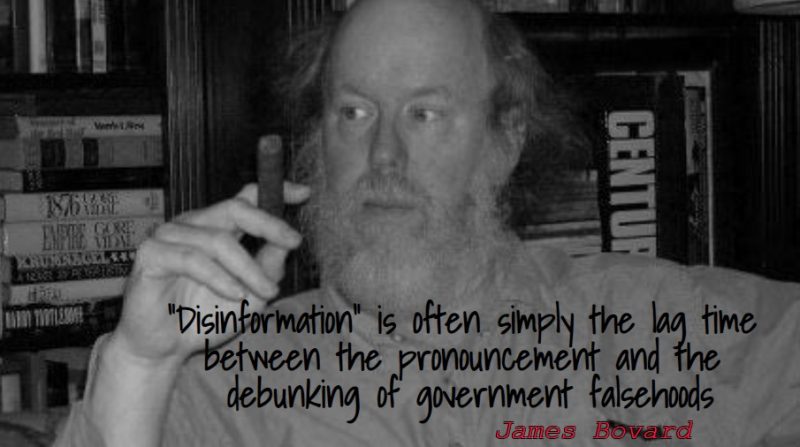 Thanks to Michael Johnson for making this zippety quote jpeg

Is Team Biden no longer even trying to avoid being a laughingstock? Why did Biden just appoint a champion of the Hunter Biden laptop coverup to serve as chief of his new Ministry of Truth?

Department of Homeland Secretary Alejandro Mayorkas announced that his agency is creating a “Disinformation Governance Board.” Given the Biden record, it is unclear whether the new board will be fighting or promulgating “disinformation.”

Nina Jankowicz, the head of the new board, is a Bryn Mawr graduate who worked for the National Democratic Institute, which is heavily funded by the National Endowment for Democracy, which spurred perennial controversy for interfering in foreign elections.

In October 2020, after The New York Post exposed damning emails and other information in Hunter Biden’s laptop, Jankowicz scoffed at the laptop controversy: “We should view it as a Trump campaign product.”

During the final Trump-Biden debate, she tweeted, “Biden notes 50 former natsec officials and 5 former CIA heads that believe the laptop is a Russian influence.” Not only was that not what they said — they said it could be a Russian plot — they offered no proof to reach that conclusion. And of course we know the Hunter laptop is real and is helping to inform a possible criminal case against the first son.

Jankowicz never complained when Twitter suppressed all links to The Post articles before the 2020 election. But last week, when rumors circulated that Elon Musk might buy Twitter, she fretted to National Public Radio: “I shudder to think about if free speech absolutists were taking over more platforms.”

That line is the Rosetta Stone for understanding the new Disinformation Governance Board. The goal is not “truth” — which could arise from the clash of competing opinions. Instead, political overlords need power to exert pressure and pull to shape Americans’ beliefs by discrediting, if not totally suppressing, disapproved opinions.

Homeland Security hailed Jankowicz as an “information warfare expert” but that honorific doesn’t indicate which side of the barricades she’ll take.

Will the new board condemn any articles that blame Biden (instead of Putin) for soaring inflation and ravaging average Americans? Will the board disparage any publication of new details of the bribes that Hunter Biden received from a tainted Ukrainian company while his father was Vice President? (Maybe Jankowicz has a soft spot for Hunter because she’s been a Ukrainian government consultant.) The new board is tasked to focus on “irregular immigration” as well as other topics. Will the board castigate any news reports on crimes committed by illegal immigrants? Will the board leak damaging information (maybe acquired by wiretaps or other dubious means) on any reporter who embarrasses the Biden administration?

Biden’s new board is part of a concerted liberal attack on free speech.

The New York Times re-sainted Obama last week as “an apostle of the dangers of disinformation.” In a recent Chicago speech, Obama called for putting “in place a combination of regulatory measures and industry norms” that notifies social-media companies “that there’s certain practices you engage in that we don’t think are good for society.” Trust Obama? When he was president, he practically demolished the Freedom of Information Act (FOIA) despite boasting of running “the most transparent administration in history.”

Former Senator Hillary Clinton is hitting the same censorious theme. She tweeted last week, “For too long, tech platforms have amplified disinformation and extremism with no accountability” as she called for the European Union to enact legislation widely seen as a “massive censorship scheme.” Perhaps Clinton is seeking to safeguard the same lawless, imperial prerogatives of rulers that she practiced as Secretary of State, when she scorned FOIA and kept her emails secret — prior to her aides using Bleachbit to destroy laptops subpoenaed by Congress.

Federal agencies have deluged Americans with malarkey for decades. We don’t need a Disinformation Czar to hector us to submit to the latest Washington catechism.