The New York Post led the charge to expose the left-wing zealot that Team Biden chose to head its new Disinformation Governance Board, its Ministry of Truth.

The Post showcased Nina Jankowicz shilling for the suppression of information on Hunter Biden’s laptop (first revealed by The Post) before the 2020 election. The Post highlighted her TikTok version of a “Mary Poppins” song warning “Information laundering is really quite ferocious” and her YouTube Christmas parody song performance, “Who do I f–k to be famous and powerful?”

Thanks to a vigorous backlash by conservative media and activists, Team Biden has hit the “pause” button on the Disinformation Board and Jankowicz submitted her resignation Wednesday. The Washington Post reported that the Department of Homeland Security decided to close the board Monday but is hesitating to pull the plug: “Working groups within DHS focused on mis-, dis- and mal-information have been suspended.” The board could be reactivated at any point, especially if the Biden team can find a more credible boss.

The Washington Post piece on the controversy was a classic of pro-Leviathan propaganda. It was written by Taylor Lorenz, who recently achieved fame after a tearful performance on MSNBC about how online criticism made her consider suicide. Lorenz’s pity party ignored her record exposing the personal lives of people she targets. Last month, she doxxed the conservative lady who runs the Libs of TikTok Twitter account. Lorenz justified investigating that person because she could have been a foreigner. (The lady was an American citizen, but no matter.)

Lorenz quotes an unnamed DHS spokesperson: “The Board’s purpose has been grossly mischaracterized; it will not police speech. . . . Its focus is to ensure that freedom of speech is protected.” Geez, why didn’t the Founding Fathers think of adding a clause to the First Amendment creating a nefarious-sounding government agency to ride shotgun on the nation’s media?

According to The Washington Post, the fact that Jankowicz was a Fulbright scholar and had “stints at multiple nonpartisan think tanks” proves she had no desire to censor. The paper did not let Jankowicz’s own words get in the way of the absolution.

Jankowicz believes that “trustworthy experts” such as herself (she boasts that she is “verified” by Twitter) should be empowered to “edit” other people’s tweets to “add context.” She denounced Loudoun County, Va., parents who complained about left-wing school curriculum for “disinformation” and “weaponizing people’s emotion.”

How does The Washington Post know that Jankowicz is trustworthy? Lorenz’s article includes three references to an organization called Advance Democracy, which she identifies as “a nonpartisan, nonprofit organization that conducts public-interest research.” Is that why Daniel Jones, Advance Democracy’s president, ran another organization — the Democracy Integrity Project — that “sent $959,613 to Fusion GPS in 2018 and $3,323,924 in 2017 for a total of $5,506,251, along with sending [British ex-spy Christopher Steele’s] company $197,608 in 2018 and $251,689 in 2017 for a total of $1,149,297,” as the Washington Examiner reported based on IRS tax returns?

The lies in the Steele dossier propelled FBI surveillance of the Trump campaign and spurred years of Russiagate vitriol that was not debunked until special counsel Robert Mueller’s report in 2019. Jankowicz continued cheering for Steele long after his dossier had been shot to pieces by the Justice Department inspector general. 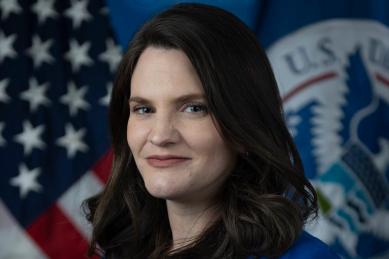 Good riddance to the ‘Ministry of Truth’ and Nina Jankowicz

The core of the media defense of Jankowicz was that only right-wing nuts fear the US government would censor Americans. But it is already happening. The Biden White House threatened antitrust investigations against social-media companies that failed to suppress “disinformation” about COVID vaccines. On March 3, Surgeon General Vivek Murthy “demanded that the tech companies turn over information about individuals who spread” COVID “misinformation,” the New Civil Liberties Alliance reported.

Last year, it was “disinformation” to claim that vaccines fail to prevent contracting or transmitting COVID. But after the Omicron wave, the phrase “breakthrough infection” became almost redundant.

Jankowicz is gone, but the Disinformation Governance Board remains a peril to free speech. The Lorenz article concluded with a lament: “DHS staffers worried that the way Jankowicz’s situation was mishandled could hurt their ability to recruit future talent.” Not to worry: Washington is full of career-climbing wackos who would sell their soul to add the Biden administration to their résumé. If their pratfalls make them a laughingstock, they can always count on a Taylor Lorenz puff piece to vindicate their lives and careers.