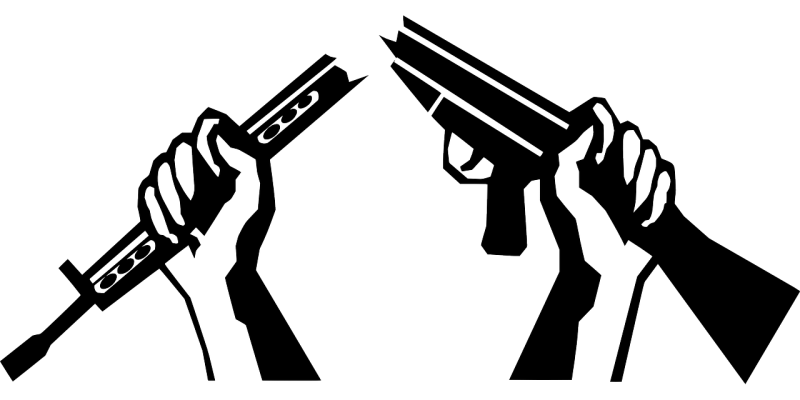 ‘Assault Weapons’ Ban: First Step on the Road to Tyranny

President Joe Biden is seeking to revive his presidency by demolishing the Second Amendment. In a televised address last Thursday, Biden called for a ban on assault weapons, which he portrayed as the epitome of evil. Vice President Kamala Harris caterwauled that assault weapons are a “weapon of war” with “no place in civil society.”

Assault weapons are a “flag of convenience” for the Democrats’ circus shell game with Americans’ constitutional rights. Biden talks as if assault weapons are solely a moral issue. But once that premise is accepted, then he can move to ban vast numbers of firearms widely owned by Americans.

In an August 2019 interview, CNN host Anderson Cooper asked Biden about gun owners who fear that “a Biden administration means they’re gonna come for my guns.” Biden replied, “Bingo, you’re right, if you have an assault weapon.” In his Thursday speech, Biden declared that he respected “the concerns of lawful gun owners.” But after Biden changes the law, millions of those same individuals could be federal felons who Biden feels entitled to disarm.

We are supposed to blindly trust the White House that an assault weapon is whatever they say it is—this week. Vice President Kamala Harris declared last week:  “You know what an assault weapon is?… It was designed for a specific purpose—to kill a lot of human beings quickly.” But millions of Americans use the gun for hunting, target shooting, and other endeavors.

The federal ban on machine guns, first enacted in 1934, rests on a clear definition: a firearm that fires multiple rounds with each trigger pull. But “assault weapon” refers to semi-automatic (one shot per trigger pull) firearms with attributes that frighten pundits and politicians. The original 1994 assault weapons ban prohibited rifles with grenade launchers—even though such grenade launchers had never been used in a violent crime in the United States. It was “picture book prohibition,” decimating the Second Amendment on aesthetic grounds.

Because “assault weapon” is a political hobgoblin rather than a specific type of firearm, legal definitions are often arbitrary and confusing—which can have fatal consequences. Montgomery County, Maryland police killed 21-year-old Duncan Lemp in a no-knock, predawn raid on March 12, 2020 after they saw an Instagram photo he posted of himself with a rifle, which they presumed was an illegal Israeli assault weapon forbidden by Maryland law. Police also targeted Lemp, an outspoken gun rights advocate, for a “shoot first, knock and announce later” raid because he had made anti-police comments to an informant.

Nine months after Lemp was shot to death in his bedroom (after police had smashed in the bedroom window), the county attorney issued a report which laconically mentioned, “It should be noted that upon further review and investigation into the IWI Tavor X95 rifle, it was determined that it was not an assault rifle…It appears that Lemp’s rifle was a legal ‘copycat’ made to look exactly like the illegal version of the IWI Tavor X95. Very minute changes such as the overall length of the weapon can mean the difference between an illegal assault rifle and a legal one.” But the non-banned weapon was “close enough for government work” to exonerate police for killing Lemp in his bedroom. The county government treated its fatal mistake like a paperwork error.

“Very minute changes” is the key to the assault weapons charade. Politicians and bureaucrats can make “minute changes” to official regulations to covertly turn millions of American gun owners into felons overnight. The Trump administration did that with bump stocks and the Biden administration is hustling to do that with pistol braces. Biden recently condemned 9 mm. ammo and gun magazines which hold more than 10 bullets—which includes most of the pistols sold in the U.S. in the last decade. While Biden is whipping up public rage on AR-15 type rifles, there is no fundamental difference between AR-15s and other rifles with a detachable magazine.

The federal assault weapon ban expired after ten years. When Sen. Dianne Feinstein (D-CA) pushed for the ban to be re-instated, she estimated that the previously banned weapons were used in 50 killings nationwide per year—fewer than the number of people strangled to death each year.  A 2004 report financed by the National Institute of Justice found that the ban had little or no impact on violent crime. A 2013 National Institute of Justice report concluded, “Since assault weapons are not a major contributor to U.S. gun homicide and the existing stock of guns is large, an assault weapon ban is unlikely to have an impact on gun violence.” All types of rifles account for less than six percent of homicides.

As a Washington Post editorial admitted after the initial assault weapons ban was enacted, “Assault weapons play a part in only a small percentage of crime. The provision is mainly symbolic; its virtue will be if it turns out to be, as hoped, a stepping stone to broader gun control.” If Biden’s assault weapons ban is placed on the books, demagogic politicians and their media allies will demand that the list of banned weapons be expanded after each high profile shooting.

Regardless of how brazenly the police fail to respond to active shooters (such as the Uvalde school shooting), the only solution will be to seize more guns from peaceful citizens. Rep. Thomas Massie (R-KY) sagely observed, “Democrats say they don’t want to ban all guns. But they do want to take some guns from all people, and all guns from some people. Good luck not being on either of their two lists.”

The AR-15 is simply the opening political bid for a disarmament game propelled by a media chorus always demanding “More! More! More!” Biden’s perennial contempt for the Second Amendment proves he cannot be trusted with a vaporous prohibition that can be expanded at his pleasure. Gun owners would be criminally naïve to expect Washington politicians to respect their rights better in the future than they did in the past.

New York Post: Biden vs. Musk? Bet on the guy who speaks full sentences regardless of what he smokes
Will Punch-Drunk Biden Take America Down with Him?

7 Responses to ‘Assault Weapons’ Ban: First Step on the Road to Tyranny