“‘We’ve never seen anything like Putin’s tax on both food and gas,” President Biden blathered yesterday after another disastrous report on soaring inflation. But almost nobody outside the Beltway believes that Putin is to blame for the ravaging of American consumers. The inflation rate has increased sixfold since Biden took office and it was soaring before Russia invaded Ukraine.

Federal data released yesterday obliterated Team Biden’s talking points about “transitory” or declining inflation. Inflation is now officially at a pace of 8.6% per year — the highest rate in more than 40 years. The price of food is up more than 10% over the past year and the price of gasoline is through the roof.

Bidenflation has slashed the average worker’s pay by 3% in the past year and much worse hits could be coming. Rep. Lance Gooden (R-Texas) noted, “Joe Biden promised $2,000 stimulus checks but gave Americans $5,000 per year inflation instead.”

In a speech Friday, Biden boasted that the economic recovery “is strong as can be but for inflation, but for gas and food.” Oh, only those things? Besides that, how’d you like the play, Mrs. Lincoln?

Consumer sentiment on the economy collapsed in May to the lowest levels on record, a much sharper fall than experts forecast. On top of soaring prices, consumers are getting hammered by shortages of everything from infant formula to tampons (and it’s not really comedian Amy Schumer’s fault). 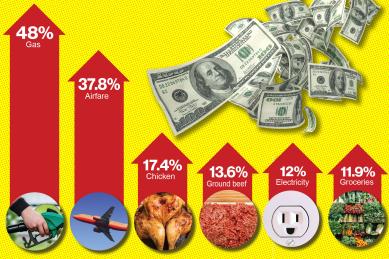 Luckily, Joe Biden is doing great — at least according to himself. Biden told Californians that because his infrastructure bill had a provision that might eventually lower the cost of Internet service in some markets, citizens are better off even though “you’re paying an extra more than $30 a month for your gas, but that still increases the money out of pocket — decreases the amount you have to put out.”

The White House transcript did not include any annotations explaining Biden’s logic or grammar. Most consumers would feel like they won the lottery if their gasoline bill had only jumped $30.

Biden concluded his speech yesterday by proclaiming: “I am so sick and tired of trickle-down economics. It does not work.” Democrats coined that phrase to denigrate Ronald Reagan-era policies that slashed inflation and renewed prosperity. Reagan became beloved in part because he ended the 1970s stagflation that seemed like the death of the American Dream.

In contrast, Biden is still pushing for trillions of dollars of new “Build Back Better” spending programs, including an array of handouts to vastly increase the number of government dependents. Guess what? It. Does. Not. Work. Biden will not be able to fix inflation this way or improve his poll numbers. But other than that, it’s going great!