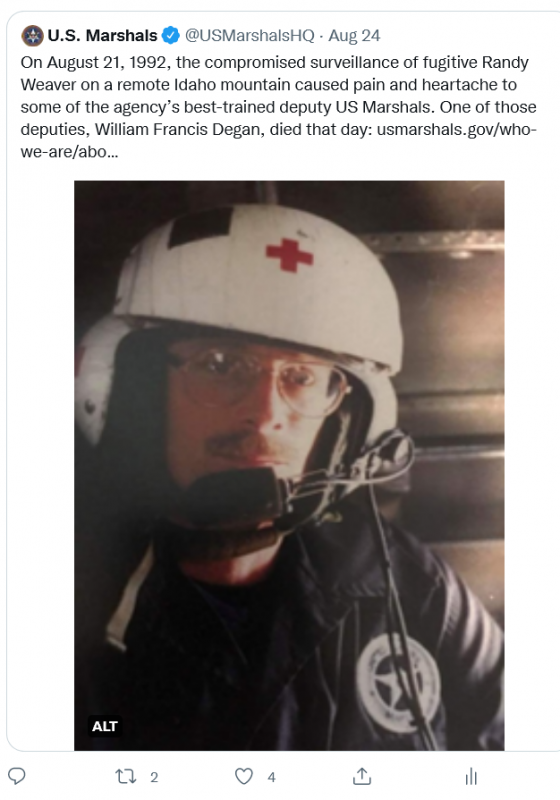 U.S. Marshals Service marked the 30th anniversary of Ruby Ridge by touting the marshal who was killed there (after he fired 7 shots).  Here is my 1996 Wall Street Journal piece on the outrageous Valor Awards presented to the surviving marshals.

The Wall Street Journal
Wednesday, March 13, 1996
They Call This ‘Valor’
By James Bovard

On March 1, [1996] the U.S. Marshals Service gave its highest award for valor to five U.S. marshals involved in the 1992 Ruby Ridge, Idaho, shoot-out, including the marshal who fatally shot a 14- year-old boy in the back and another marshal who provoked a firefight by killing the boy’s dog. The award announcement sent shock waves across Capitol Hill.

The marshals received the award, according to U.S. Marshals Service Director Eduardo Gonzalez, for “their exceptional courage, their sound judgment in the face of attack, and their high degree of professional competence during the incident.” Mr. Gonzalez labeled the men “heroes.” This makes a mockery of the many brave marshals who serve their fellow citizens.

Randy Weaver, a white separatist who had attended a few Aryan Nation meetings, was charged in 1991 with selling illegal sawed-off shotguns to a federal informant. (A jury later concluded that Mr. Weaver had been entrapped.) The U.S. Marshals Service was assigned the job of bringing Mr. Weaver in. The marshals spent the next year and a half spying on Mr. Weaver, sneaking around his land dozens of times and erecting spy cameras to record all of his family’s movements. 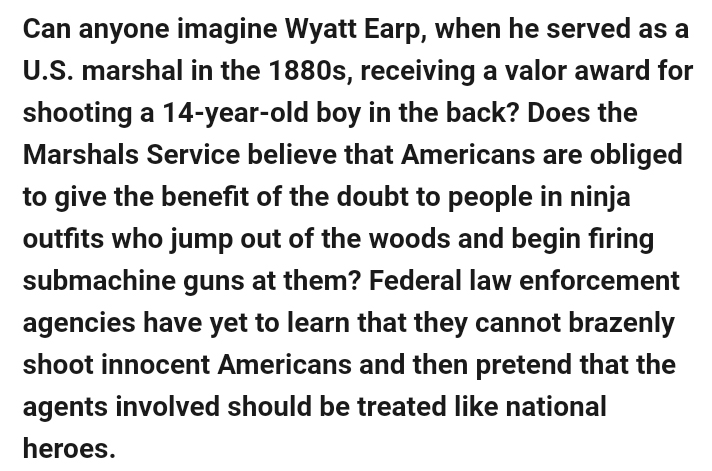 The marshals greatly exaggerated the threat from Mr. Weaver due in part to false information they had received from ATF agent Herb Byerly, who, according to one U.S. marshal, told them that “Weaver is a suspect in several eastern Washington and western Montana bank robberies. An alleged accomplice in the robberies was arrested somewhere in Iowa and implicated a person believed to be Weaver during a confession. The accomplice has since escaped from custody with the assumption that he could be on the Weaver property.” Agent Byerly told a Senate subcommittee that the incorrect information was due to a “typographical error.”

On Aug. 21, 1992, six U.S. marshals scurried onto the Weaver property, outfitted in full ninja-type camouflage and ski masks and carrying submachine guns and other high-powered weapons. The marshals had no visible badges or insignia identifying them as federal agents. After agents threw rocks near the Weaver cabin, Mr. Weaver’s 14-year-old son, Sammy, and Kevin Harris, a 25-year- old friend living in the cabin, ran to see what the Weavers’ dogs were barking at.

The marshals took off running through the woods, followed by one dog. The marshals later told the FBI that they had been ambushed. But, according to a Justice Department confidential report, the marshals chose to stop running and take a stand behind stumps and trees. The marshals had the advantage of surprise, camouflage and vastly more firepower than the boy and Kevin Harris possessed.

The firefight began when Marshal Arthur Roderick shot and killed the family dog, as a Senate subcommittee investigation concluded last December. Marshals Roderick and Cooper claimed that the first shot of the encounter had been fired by Kevin Harris and had killed Marshal Bill Degan. But Capt. Dave Neal of the Idaho State Police team that rescued the marshals 12 hours later stated that Marshal Roderick indicated that he had fired the first shot to kill the dog.

After his dog had been killed, Sammy fired his gun in the direction the shots had come from.Sammy was running back to the cabin when, according to the government’s ballistics expert at Mr. Weaver’s 1993 trial, a shot from Marshal Larry Cooper hit him in the back and killed him. Kevin Harris stated that he responded to Sammy’s shooting by firing one shot into the woods to try to protect Sammy and defend himself. Mr. Harris’s shot apparently killed Marshal Degan; an Idaho jury found that Mr. Harris acted in self-defense. Though Marshals Cooper and Roderick testified that Marshal Degan was killed by the first shot of the exchange and had not fired a shot, evidence later proved that he had fired seven shots.

Marshals Roderick and Cooper stayed huddled alongside Marshal Degan’s body for the next 12 hours, afraid that they might be shot if they tried to carry him off the mountain — even though the Weavers had long since retrieved their son’s corpse and gone back to their ramshackle cabin. Other marshals panicked and wrongfully indicated that the Weavers had U.S. marshals “pinned down” for hours under heavy gunfire. A subsequent FBI on-site investigation found evidence that the marshals fired far more shots at Sammy Weaver and Mr. Harris than Sammy and Mr. Harris fired at them.

FBI Hostage Rescue Team snipers were called in. The subcommittee report noted, “FBI agents who were briefed in Washington and in Idaho during the early stages of the crisis at Ruby Ridge received a great deal of inaccurate or exaggerated information concerning . . . the firefight.” The marshals’ gross mischaracterization helped pave the way to the FBI killing of Vicki Weaver, Sammy’s mother.

Marshals Roderick and Cooper testified last Sept. 15 before Senate Judiciary subcommittee hearings chaired by Sen. Arlen Specter (R., Pa.) on the Ruby Ridge case. They stunned the committee by announcing that Randy Weaver had shot his own son. Though Sammy was shot as he was running in the direction of his father, and though Mr. Weaver was far away from the scene of his son’s death, and was in front of him and at a higher elevation, and though his son was shot in the back by a bullet with an upward trajectory, Marshal Cooper insisted the father still somehow shot the son.

That could have happened only if Randy Weaver had been using “Roger Rabbit” cartoon bullets — bullets that could twist around trees, take U-turns, and defy all laws of physics. The jury foreman at the federal trial in 1993 characterized the new Cooper-Roderick theory with an expletive and told the Washington Post last September that “the government’s story has changed every time you turn around.”

The Senate subcommittee report concluded, “The Subcommittee . . . has seen no evidence which would support the Marshals’ claim. . . .” Sen. Specter said last week that he was “surprised to see a com/mendation for U.S. marshals whose conduct was under censure from the Judiciary subcommittee.” The marshals’ dubious conduct is further indicated by the Marshals Service’s refusal to undertake routine internal investigations after the fatal shootings. The Senate subcommittee noted, “We were disappointed to learn that, based on his desire to avoid creating discoverable documents that might be used by the defense in the Weaver/Harris trial . . . former Director Henry Hudson decided to conduct no formal internal review of USMS activities connected with the Weaver case and the Ruby Ridge incident.”

Can anyone imagine Wyatt Earp, when he served as a U.S. marshal in the 1880s, receiving a valor award for shooting a 14-year-old boy in the back? Does the Marshals Service believe that Americans are obliged to give the benefit of the doubt to people in ninja outfits who jump out of the woods and begin firing submachine guns at them? Federal law enforcement agencies have yet to learn that they cannot brazenly shoot innocent Americans and then pretend that the agents involved should be treated like national heroes.

***  I was looking for a copyright-safe photo of Sammy Weaver but found nothing via Google. If anyone has a link, let me know and I’ll add that in. 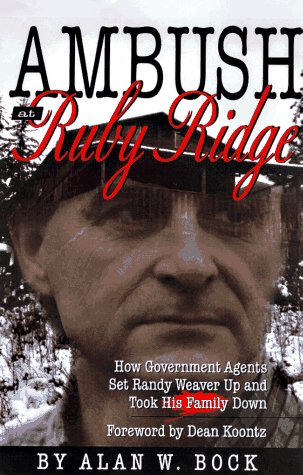 Alan Bock did the best book on Ruby Ridge