Julian Assange and Our Impunity Democracy

On Saturday, protests supporting Julian Assange will occur around the world. In London, Assange supporters will link arms around the parliament building. Protests will also occur outside the Justice Department headquarters in Washington (I’ll be one of the speakers), D.C., and in San Francisco, Tulsa, Denver, and Seattle, as well as in Australia.

Four years ago, I wrote a USA Today column calling for Assange to receive a Presidential Medal of Freedom. My piece failed to sway the Trump White House and the Biden administration has taken up the prosecution of one of the most important truth tellers of this century. Assange has been locked away for years in a maximum-security prison in Britain. He is facing extradition to face 17 counts of violating the Espionage Act for disclosing classified information. If the Brits deliver Assange to the U.S. government, he has almost no chance for a fair trial because of how prosecutions are rigged in federal court. 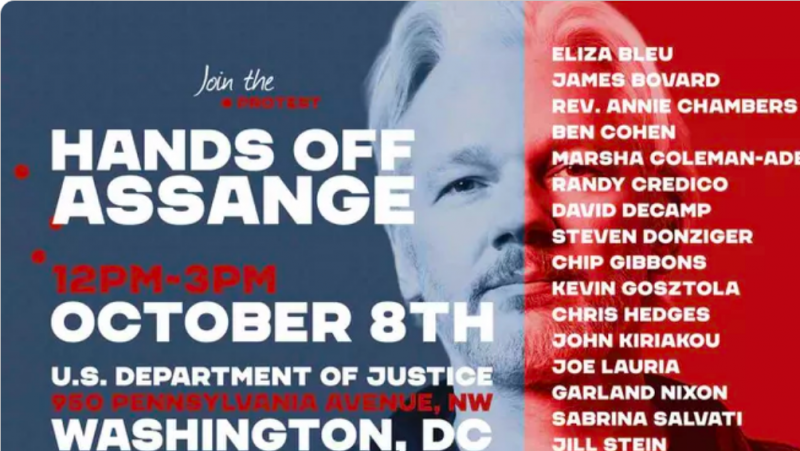 The last four years have revealed why activists like Assange, who has been held for years in a maximum-security British prison, are vital to any hope of making rulers accountable to the citizenry. Attorney General Ramsey Clark warned in 1967, “Nothing so diminishes democracy as secrecy.” At this point, America is an Impunity Democracy in which government officials pay no price for their abuses.

Assange was targeted by the U.S. government after his organization, Wikileaks, disclosed tens of thousands of documents and some videos exposing crimes committed by the U.S. military against Afghan and Iraqi civilians. A 2010 Christian Science Monitor report on the leak noted that it was “unclear how Americans might react to revelations about apparent indiscriminate killing of Afghan civilians” by American forces. But the Monitor headline captured the verdict in Washington: “Congress’s response to WikiLeaks: shoot the messenger.” Vice President Joe Biden denounced Assange as a “high-tech terrorist.”

Federal agencies could not prove that any of the information that Wikileaks released was false. At the court martial of former Army Corporal Bradley Manning, who leaked the documents, prosecutors failed to show that any information Wikileaks disclosed had led to the death of a single person in Afghanistan or Iraq. That conclusion was re-confirmed by a 2017 investigation by PolitiFact. Even Biden admitted in 2010 that “I don’t think there’s any substantive damage” from the Wikileaks revelations.” But Assange was guilty of violating the U.S. government’s divine right to blindfold the American people.

When the federal indictment against Assange was announced in 2019, a New York Times editorial declared that it was “aimed straight at the heart of the First Amendment” and would have a “chilling effect on American journalism as it has been practiced for generations.” Unfortunately, Americans and foreigners continue to suffer because of the perennial cover-ups of U.S. foreign interventions.

After Britain arrested Assange on behalf of the U.S. government in 2019, Sen. Joe Manchin (D-WV) whooped that Assange “is our property and we can get the facts and the truth from him.”

But Manchin had no recommendations on how Americans can “get the facts and the truth” from the federal government. Biden has ramped up U.S. bombings in Somalia: who exactly are we killing? It is a secret. Which Syrian terrorist groups are the U.S. government still bankrolling? It’s a secret. Why is the U.S. continuing to assist Saudi atrocities against Yemeni civilians? It’s a secret.

And then there’s the biggest and most dangerous secret operation on the horizon right now – the U.S. intervention in the Russia-Ukraine war. Folks can condemn Russia and support Ukraine without believing that Washington policymakers deserve a blank check to potentially drag America into a nuclear war. Are CIA analysts or Pentagon officials issuing warnings about U.S. government actions in this conflict could lead to a spiral that ends in catastrophe? Unfortunately, Americans won’t learn of any such memos until damage has been done. And if a disaster occurs, then we’ll see the same sham that occurred after the Iraq War – some Senate Committee blathering that no one is to blame because everyone in Washington was a victim of “group think.”

Federal prosecutors stress that Assange leaked “classified” information. But federal agencies are creating trillions of pages of new “classified’ secrets each year. Yet, any information which is classified is treated like a political holy relic that cannot be exposed without cursing the nation.

Pervasive secrecy helps explain the collapse of trust in Washington. Americans today are more likely to believe in witches, ghosts, and astrology than to trust the federal government. Adding Assange’s scalp to the Justice Department’s trophy wall will do nothing to end the mistrust of the political ruling class that has dragged America into so many debacles.

Assange is guilty of lese-majeste – embarrassing the government by exposing their follies, frauds, and crimes. Assange declared years ago, “If wars can be started by lies, they can be stopped by truth.” Dropping the charges against Assange is the best way for the Biden administration to prove it is serious about ending excessive secrecy.