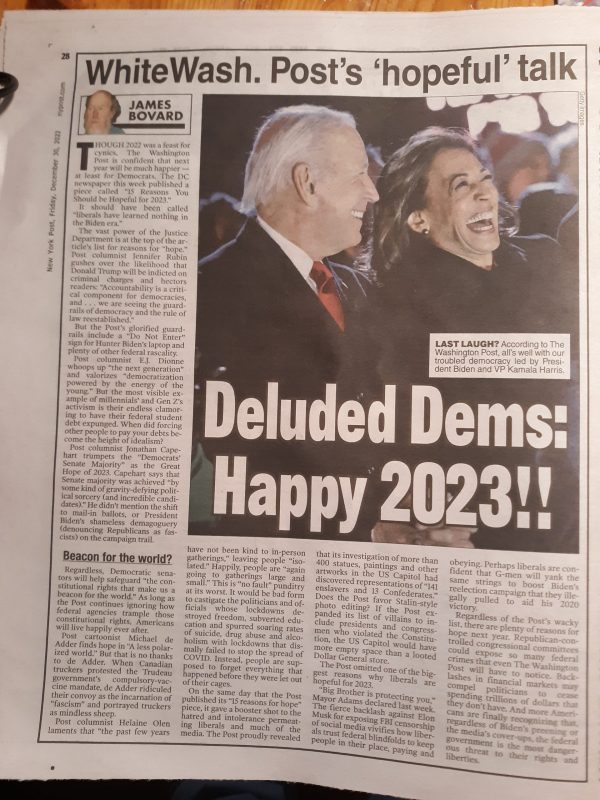 Liberals have learned nothing in the Biden era

Though 2022 was a feast for cynics, The Washington Post is confident that next year will be much happier — at least for Democrats. The DC newspaper this week published a piece called “15 Reasons You Should be Hopeful for 2023.”It should have been called ­“liberals have learned nothing in the Biden era.”

The vast power of the Justice Department is at the top of the article’s list for reasons for “hope.” Post columnist Jennifer Rubin gushes over the likelihood that Donald Trump will be indicted on criminal charges and hectors readers: “Accountability is a critical component for democracies, and . . . we are seeing the guardrails of democracy and the rule of law reestablished.”

But the Post’s glorified guardrails include a “Do Not Enter” sign for Hunter Biden’s laptop and plenty of other federal rascality.

Post columnist E.J. Dionne whoops up “the next generation” and valorizes “democratization powered by the energy of the young.” But the most visible example of Millennials’ and Gen Z’s activism is their endless clamoring to have their federal student debt expunged. When did forcing other people to pay your debts become the height of idealism?

Post columnist Jonathan Capehart trumpets the “Democrats’ Senate Majority” as the Great Hope of 2023. Capehart says that Senate majority was achieved “by some kind of gravity-defying political sorcery (and incredible candidates).” He didn’t mention the shift to mail-in ballots, or President Biden’s shameless demagoguery (denouncing Republicans as fascists) on the campaign trail.Regardless, Democratic senators will help safeguard “the constitutional rights that make us a beacon for the world.” As long as the Post continues ignoring how federal agencies trample those constitutional rights, Americans will live happily ever after.

Post cartoonist Michael de ­Adder finds hope in “A less polarized world.” But that is no thanks to de Adder. When Canadian truckers protested the Trudeau government’s compulsory-vaccine mandate, de Adder ridiculed their convoy as the incarnation of “fascism” and portrayed truckers as mindless sheep.

Post columnist Helaine Olen ­laments that “the past few years have not been kind to in-person gatherings,” leaving people “isolated.” Happily, people are “again going to gatherings large and small.” This is “no fault” punditry at its worst. It would be bad form to castigate the politicians and officials whose lockdowns destroyed freedom, subverted education and spurred soaring rates of suicide, drug abuse and alcoholism that dismally failed to stop the spread of COVID. Instead, people are supposed to forget everything that happened before they were let out of their cages.

On the same day that the Post published its “15 reasons for hope” piece, it gave a booster shot to the hatred and intolerance permeating liberals and much of the ­media. The Post proudly revealed that its investigation of more than 400 statues, paintings and other artworks in the US Capitol had discovered representations of “141 enslavers and 13 Confederates.” Does the Post favor Stalin-style photo editing? If the Post expanded its list of villains to include presidents and congressmen who violated the Constitution, the US Capitol would have more empty space than a looted Dollar General store.

The Post omitted one of the biggest reasons why liberals are hopeful for 2023.

“Big Brother is protecting you,” Mayor Adams declared last week. The fierce backlash against Elon Musk for exposing FBI censorship of social media vivifies how liberals trust federal blindfolds to keep people in their place, paying and obeying. Perhaps liberals are confident that G-men will yank the same strings to boost Biden’s ­reelection campaign that they illegally pulled to aid his 2020 ­victory.

Regardless of the Post’s wacky list, there are plenty of reasons for hope next year. Republican-controlled congressional committees could expose so many federal crimes that even The Washington Post will have to notice. Backlashes in financial markets may compel politicians to cease spending trillions of dollars that they don’t have. And more Americans are finally recognizing that, regardless of Biden’s preening or the media’s cover-ups, the federal government is the most dangerous threat to their rights and ­liberties.