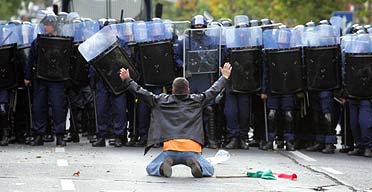 The photo above is from the UK Guardian.

There is a short video of police brutality against Budapest demonstrators on YouTube here.

Hat tip to Daniel MacAdams, who spent most of the 1990s in Budapest.

“Every Day is 1956”: The Hungarian Revolution Today
Email Bovard Address is Down – Alternative Email Address