Tom Toles’s excellent cartoon below captures the soul of the debt limit talks. Anyone who is not cynical is probably heading for the chopping block.

My good friend and talk show hellraiser extraordinaire Brian Wilson has an excellent article tomorrow at LewRockwell.com on the real meanings behind the key terms flung around in the current squabble:

If the Republicans haven’t caved by this weekend, all hell will break loose. Spending is Washington’s power. They can’t afford to lose this battle.

So how did a routine vote to increase the debt limit turn into political Armageddon? It starts with the Tea Party Movement. The original complaint about taxes, lead to spending and on into the debt limit. By the 2010 elections, debt limit was on the political radar.

So along comes the “routine debt limit vote” and the Tea Party representatives make some noise about it. The Republican leadership thought a little TV wrestling, make a phony spending cut deal and the hicks will fall in line. The Democratic leadership said, if we have to get out of our comfy chairs to fake a fight, why don’t we make it a really big phony spending cut and add a tax increase. In 20/20 hindsight, this is the point when all parties concerned wish someone had suggested, “Hey! Why don’t we just combine our votes and cut the Tea Party Poopers out of the picture!?” Sadly for good ole BAU (Business As Usual), no one did.

The Democratic base blew up over threats of entitlement spending cuts. The Republican base was unimpressed by the velvet language of “revenue enchantments.” Suddenly, instead of a few redneck Tea Party chuckleheads, leadership was facing a palace revolt by everyone not in a safe district looking at reelection in 2012. The leadership of the two parties is reduced to having Obama come on national TV and beg for Compromise and Balance. (See above). 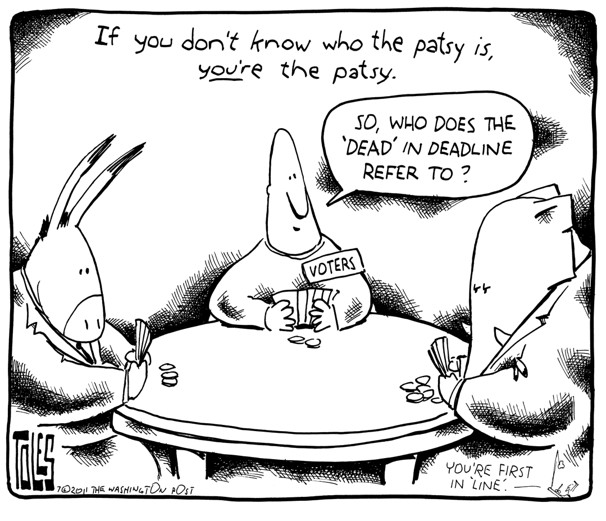 2 Responses to Debt Limit Talks: “Squeal Like a Pig,” the Establishment Said