Confessions of a One-Season Santa

When I asked one girl what she wanted for Christmas, she gritted her teeth: ‘I want you to leave.’ 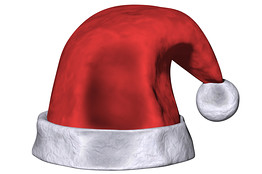