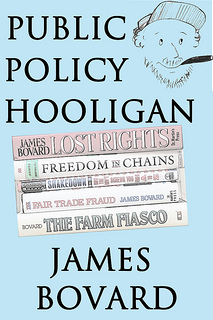 I have spent decades trying to turn political dirt into philosophic gold. I have yet to discover the alchemist’s trick, but I still have fun with the dirt.

Yet, I was merely seeking to help Americans appreciate how their government serves them.

This is the wayward journey from Eagle Boy Scout to public policy hooligan – from being raised to revere authority to slaughtering sacred cows left and right, or at least hot-branding politicians.

It is also the story of the overnight conversion of a protein pill-popping weightlifting champion into a library-addicted philosophy devotee. I dropped out of college after becoming enthralled by a Great Books list. After the classics awoke my mind to new Yukon Territories, I could no longer endure tenured droning.

With coffin makers on one side of my family and gravediggers on the other, I naturally became an investigative journalist. From getting kicked out of the Supreme Court, to heisting damning documents at World Bank headquarters, to racing around East Bloc regimes one step ahead of the secret police, I have had more fun than I deserved. My rabble-rousing in Playboy, Wall Street Journal, New York Times, and elsewhere exposed how bureaucratic rampages have razed one constitutional right after another.

This is the chronicle of how I came to better understand liberty and Leviathan. I’ve had a front row seat as our republic morphed into an Attention Deficit Democracy. I remain mystified why so many people willingly submit to rulers who give them such grief.

The names of some of the women mentioned in this narrative have been changed so that they don’t track me down and try to stab me again.