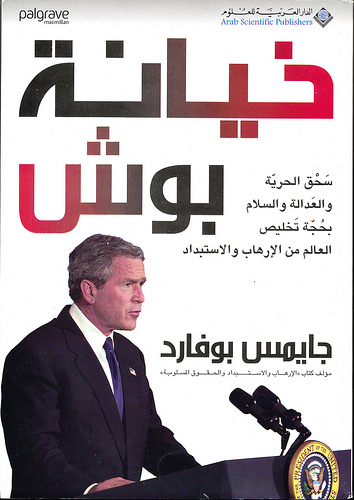 Six years ago, the Syrian newspaper Al-Thawrah reviewed the Arabic edition of Bush Betrayal, published by the Arab Scientific Publishers in Beirut. For some reason, the book evoked more enthusiasm in Syria than it did in some circles in the United States. Never could figure that one out. Here’s the link to the original review, which was kindly translated by Sate Hamza, a Syrian doctor and professor now living in Canada.  [Update 9/07/2017: The link no longer connects to the original review.]

Unfortunately, Obama is now showing some of the same power-dementia “world policeman” malarkey that poisoned the reign of George W. Bush.

If anyone has seen or heard of other reviews of the Arabic edition of Bush Betrayal, please let me know.

Treason is one of the most serious accusations to be leveled at any person, especially if that person was the president of his country and the chief responsible for the lives, security and safety of his citizens.

This severe and grave accusation was leveled by well-known American author James Bovard at the current president of the United States of America, George W. Bush. He published his indictment in a detailed and documented analytical book that bears the clear, powerful and direct title of “The Bush Betrayal”.

Since being published four years ago, the book has aroused and continues to arouse a wide-scale, strong controversy among the US political and intellectual quarters, not because of its bold, shocking, and unusual title, but because the writer succeeded in gathering hundreds of pieces of evidence to prove the soundness of his theory, which is based on accusing the president of the superpower of treason. The President broke his oath to preserve the Constitution and achieve prosperity and peace for the American People. He personally led his country to drown in a horrible quagmire of political, economic and moral conflicts. And he made his country the most hated in the world by directly, violently and insanely crushing the values of freedom, justice and peace, and by his country’s forcible and bloody interference in the affairs of other peoples and societies using unacceptable false or flimsy excuses, at the head of which is the lie of “freeing the world from terrorism and tyranny”.

Bovard documents how President Bush broke his promises that he made during his election campaign and drowned his country in an absurd war and pledged the country to the interests of private corporations and the oil and weapon manufacturing industries.

The author exposes in great detail the bases on which the Bush presidency was established, both before and after being bogged down in the complex quagmire of the Iraq invasion.

He also unveils a number of Bush’s bad and negative traits, including his lying and dishonesty and the great harm he has caused the reputation of the US and the embarrassment he caused his people in front of the entire world.

The author lists tens of examples that emphasize Bush’s clumsiness and the disintegration of his justifications to occupy Iraq, especially the Iraqi WMD fraud (which turned out to be totally false), and his failure to stamp out terrorism in his global “war on terror” (after the events of September 11, 2001), which led him to stumble in an endless series of wars and battles (against potential, more likely illusory, dangers). Bush’s personal criteria (relating to preemptive wars) are much more dangerous than all of his old lies because they enable him to carry out wars on tens of countries that he perceives to be a danger to the national security of the United States.

What is noteworthy is that Bovard draws parallels between what Bush’s army is doing in Iraq of random killing, destruction, terrorizing of civilians and terrifying women and children, and what his Israeli “friends and allies” are doing in the occupied Arab territories. The author quotes US Major General Michael Vane who says that he traveled (in July of 2003) to Israel accompanied by other US officers “to glean lessons learned from their counterterrorist operations in urban areas,”. The US officers also expressed interest in Israeli software programs that teach soldiers how to act in the West Bank and Gaza (p. 364).

And despite the fact that Bush has declared time and again that his War on Iraq would lead to the establishment of a “free and democratic society that is not a breeding ground for terrorism”, the latter motto and major fabrication is totally refuted by what’s happening in Iraq today.

The results that the author arrives at in every chapter of his exciting, interesting and documented book proves what he set out to show, and that is President Bush the son, committed a tremendous amount of errors, failures and aberrations, and instead of adhering to preserve the Constitution and the values of freedom and justice and the people’s right to self-determination, he destroyed the reputation of his country and caused it a disgrace and an irreparable moral loss that will take a long time to erase.

The author emphasizes at the end of his book that “We have deviated away from the vision and wisdom of our founding forefathers .. and regarding Bush, he is a danger man, and that is due in part to the authorization that he believes God has granted him”!!

He concludes by saying: As long as Americans tolerated more of Bush’s lies and stupidities, the more the harms and dangers they will suffer from, will increase, and the more the perils he will lead them into.