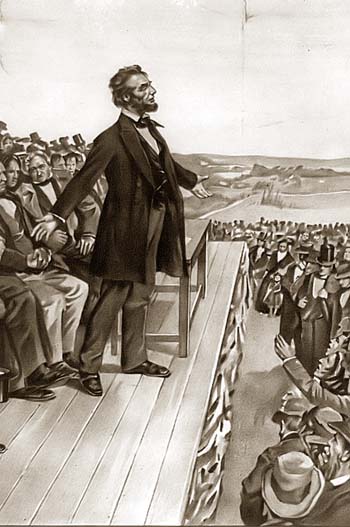 I am mystified by all the whooping on the 150th anniversary of the Gettysburg Address.  Most of the commentators seem to believe that Lincoln was an honest man touting the highest ideals.

Massachusetts abolitionist Lysander Spooner offered the most concise refutation to President Lincoln’s claim that the Civil War was fought to preserve a “government by consent.” Spooner observed, “The only idea . . . ever manifested as to what is a government of consent, is this—that it is one to which everybody must consent, or be shot.”

The main lesson from the Gettysburg address is – the more vehemently a president equates democracy with freedom, the greater the danger he likely poses to Americans’ rights. Lincoln was by far the most avid champion of democracy among nineteenth century presidents—and the president with the greatest visible contempt for the Constitution and the Bill of Rights. Lincoln swayed people to view national unity as the ultimate test of the essence of freedom or self-rule. That Lincoln suspended habeas corpus, jailed 20,000 people without charges, forcibly shut down hundreds of newspapers that criticized him, and sent in federal troops to shut down state legislatures was irrelevant because he proclaimed “that this nation shall have a new birth of freedom, and that government of the people, by the people, for the people shall not perish from the earth.”

The fact that warmongers like George W. Bush and Obama purport to idolize Lincoln should be a warning sign to attentive folks.

Lincoln’s rhetoric cannot be judged apart from the actions he authorized to enforce his “ideals”:

In a September 17, 1863, letter to the War Department, Gen. William Sherman wrote: “The United States has the right, and … the … power, to penetrate to every part of the national domain. We will remove and destroy every obstacle — if need be, take every life, every acre of land, every particle of property, everything that to us seems proper.” President Lincoln liked Sherman’s letter so much that he declared that it should be published.

On June 21, 1864, before his bloody March to the Sea, Sherman wrote to the secretary of war: “There is a class of people [in the South] — men, women, and children, who must be killed or banished before you can hope for peace and order.”

On October 9, 1864, Sherman wrote to Gen. Ulysses S. Grant: “Until we can repopulate Georgia, it is useless to occupy it, but the utter destruction of its roads, houses, and people will cripple their military resources.” Sherman lived up to his boast — and left a swath of devastation and misery that helped plunge the South into decades of poverty.

General Grant used similar tactics in Virginia, ordering his troops “make all the valleys south of the Baltimore and Ohio railroad a desert as high up as possible.” The Scorched Earth tactics the North used made life far more difficult for both white and black survivors of the Civil War.

Lincoln was blinded by his belief in the righteousness of federal supremacy.  His abuses set legions of precedents that subverted the vision of government the Founding Fathers bequeathed to America.

Wash. Post Finally Sees the Light on Food Stamps?
JFK Assassination: Why So Many Government Lies?