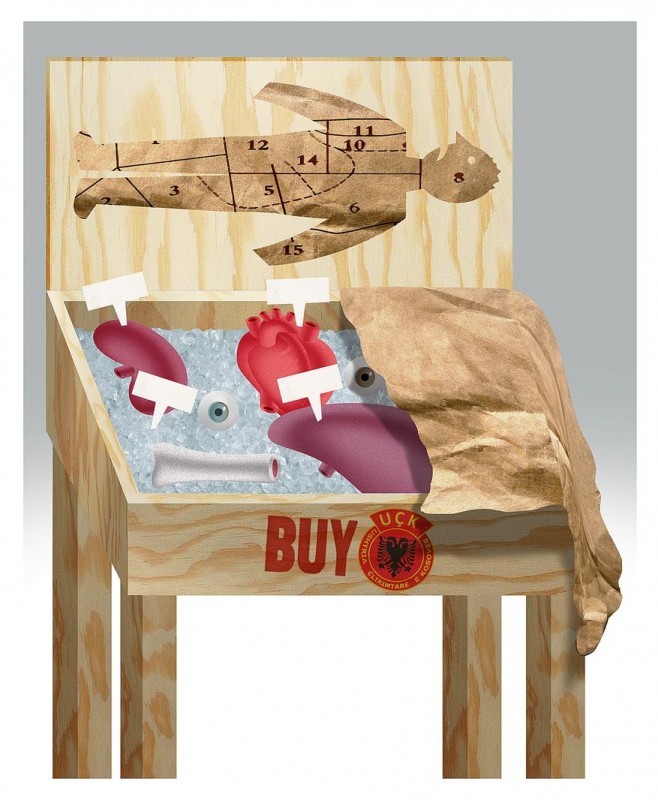 When the spoils of war are human organs

Former President Bill Clinton continues to be feted around the world as a progressive champion of human rights. However, a European Union task force last week confirmed that the ruthless cabal he empowered by bombing Serbia in 1999 has committed atrocities that include murdering individuals to extract and sell their kidneys, livers and other body parts.

Clint Williamson, the chief prosecutor of a special European Union task force, declared that senior members of the Kosovo Liberation Army (KLA) had engaged in “unlawful killings, abductions, enforced disappearances, illegal detentions in camps in Kosovo and Albania, sexual violence, forced displacements of individuals from their homes and communities, and desecration and destruction of churches and other religious sites.”

A special war-crimes tribunal is planned for next year. The New York Times reported that the trials may be stymied by cover-ups and stonewalling: “Past investigations of reports of organ trafficking in Kosovo have been undermined by witnesses’ fears of testifying in a small country where clan ties run deep and former members of the KLA are still feted as heroes. Former leaders of the KLA occupy high posts in the government.” American politicians have almost entirely ignored the growing scandal. Vice President Joe Biden hailed former KLA leader and Kosovo Prime Minister Hashim Thaci in 2010 as “the George Washington of Kosovo.” A few months later, a Council of Europe investigative report tagged Mr. Thaci as an accomplice to the body-trafficking operation.

The latest allegations might cause some Americans to rethink their approval of the 78-day bombing campaign against Serbia killed up to 1,500 civilians. In early June 1999, The Washington Post reported that “some presidential aides and friends are describing [bombing] Kosovo in Churchillian tones, as Clinton’s ‘finest hour.’” Clinton administration officials justified killing civilians because the Serbs were allegedly committing genocide in Kosovo. After the bombing ended, no evidence of genocide was found, but Mr. Clinton and Britain’s Tony Blair continued boasting as if their war stopped a new Hitler in his tracks.

The KLA’s savage nature was well-known before the Clinton administration formally christened them “freedom fighters” in 1999. The prior year, the State Department condemned “terrorist action by the so-called Kosovo Liberation Army.” The KLA was heavily involved in drug trafficking and had close to ties to Osama bin Laden. Arming the KLA helped Mr. Clinton portray himself as a crusader against injustice and shift public attention after his impeachment trial. Mr. Clinton was aided by many congressmen anxious to portray U.S. bombing as an engine of righteousness. Sen. Joe Lieberman whooped that the United States and the KLA “stand for the same values and principles. Fighting for the KLA is fighting for human rights and American values.”

After the bombing ended, Mr. Clinton assured the Serbian people that the United States and NATO agreed to be peacekeepers only “with the understanding that they would protect Serbs as well as ethnic Albanians and that they would leave when peace took hold.” In the subsequent months and years, American and NATO forces stood by as the KLA resumed its ethnic cleansing, slaughtering Serb civilians, bombing Serbian churches and oppressing any non-Muslims. Almost a quarter-million Serbs, Gypsies, Jews, and other minorities fled Kosovo after Mr. Clinton promised to protect them. By 2003, almost 70 percent of the Serbs living in Kosovo in 1999 had fled, and Kosovo was 95 percent ethnic Albanian.

In 2009, Mr. Clinton visited Kosovo’s capital, Pristina, for the unveiling of an 11-foot-tall statue of himself. The allegations of the KLA’s involvement in organ trafficking were already swirling, but Mr. Clinton overlooked the grisly record of his hosts. Instead, he stood on Bill Clinton Boulevard and lapped up adulation from supporters of one of the most brutal regimes in Europe. A commentator in the United Kingdom’s The Guardian newspaper noted that the statue showed Mr. Clinton “with a left hand raised, a typical gesture of a leader greeting the masses. In his right hand he is holding documents engraved with the date when NATO started the bombardment of Serbia, 24 March 1999.”

Shortly after the end of the 1999 bombing campaign, Mr. Clinton enunciated what his aides labeled the Clinton doctrine: “Whether within or beyond the borders of a country, if the world community has the power to stop it, we ought to stop genocide and ethnic cleansing.” In reality, the Clinton doctrine was that presidents are entitled to commence bombing regardless of whether their accusations against foreigners are true. As long as the U.S. government promises great benefits from bombing abroad, presidents can usually attack whom they please.

Mr. Clinton’s war on Serbia was a Pandora’s box from which the world still suffers. Because politicians and most of the media portrayed the war against Serbia as a moral triumph, it was easier for the Bush administration to justify attacking Iraq and for the Obama administration to bomb Libya. Both interventions sowed chaos that continues to curse the purported beneficiaries.

Unfortunately, Bill Clinton will never be held liable for killing innocent Serbs or for helping body-snatchers take over a nation the size of Connecticut. Mr. Clinton is reportedly being paid up to $500,000 for each speech he gives nowadays. Perhaps some of the well-heeled attendees could brandish artificial arms and legs in the air to showcase Mr. Clinton’s actual legacy.

* Thanks to WT’s Alexander Hunter for the great art work at the top!