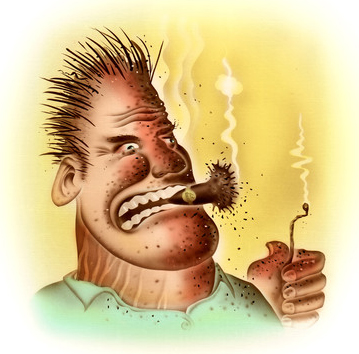 This week’s Barron’s contains a response to my article on the feds’ anti-cigar crackdown from Dr. Ioan P. Cleaton-Jones.  His letter is headlined: “A Healthy Choice”:

James Bovard’s Feb. 9 Other Voices essay, “Nanny Doesn’t Like Cigars,” asserts that the rights of 13 million cigar smokers to choose to consume a harmful product would be violated by increased Food and Drug Administration regulation of tobacco products. Tobacco consumption causes significant increases in cancer, heart disease, strokes, and myriad other ailments, which mean increased costs to treat them. Who pays that cost? It is mostly taxpayers, not the smokers, because 48% of medical care in the U.S. is publicly funded, and most cancer and heart disease occur in people in the age group covered by Medicare.

If tobacco users were prepared to sign away all of their rights to receive payment for their medical care from their fellow taxpayers, they would be free to make an unwise choice without government interference. However, so long as they expect to enjoy the right to public funding for their health care, then they should accept measures to reduce avoidable costs for taxpayers.
Dr. Ioan P. Cleaton-Jones
Arlington, Va.

In other words, since politicians disrupted medical care with a byzantine tangle of subsidies, bureaucrats are entitled to prohibit any behavior they disapprove on the grounds of reducing health care outlays.  In the “Subsidies and Subjugation” chapter in Lost Rights: The Destruction of American Liberty (St. Martin’s Press, 1994), I warned:

Subsidies are the twentieth-century method of humane conquest — a slow political coup d’etat over one sector of the economy and society after another.  Government subsidies allow the government to progressively dominate each activity that it sets out to aid.  Politicians first assert their sacred duty to help those in need by creating a subsidy program — and then assert their sacred duty to taxpayers to regulate the subsidized in order to protect taxpayers’ “investment.”  With every subsidy – it is a question of which strings are attached, and when they will be pulled. Government starts out acting generous, and soon ends up dictating terms and conditions.  Subsidies mean political behavior modification.  The more rewards and penalties the government possesses, the more the individual will be influenced in his daily decisions by the preferences and values of the bureaucratic-political rulers.  The only way to assume that subsidies are compatible with individual liberty is to assume that politicians and bureaucrats do not like power –  that politicians have no desire to exercise power – only to confer benefits.

Dr. Cleaton-Jones’ letter mentions that he lives in “Arlington, Va.” but omits his employer.  A quick Google check reveals that he works for the World Bank – an organization with a long history of bankrolling dictators and socialist schemers. World Bank-aided governments have killed far more people than cigars.  Perhaps Cleaton-Jones’ public health analyses are carefully calibrated to ignore the risks of political power.

Here are some links to a few pieces I did in the old days on the World Bank’s tawdry record:

Wall Street Journal, September 30, 1985:  Behind the Words at the World Bank

The Food and Drug Administration also has a far worse record on public health than most people recognize.  Sam Kazman, the general counsel for the Competitive Enterprise Institute, has done some of the best writing on the mortality resulting from the FDA’s pointless delays in approving life-saving new drugs and medical treatments.  Kazman wrote: “Whenever FDA announces its approval of a major new drug or device, the question that needs to be asked is: If this drug will start saving lives tomorrow, then how many people died yesterday waiting for the agency to act?”   CEI did a great video explaining the deadly peril from the FDA.  (I still think that the lead actor looks like the govt. inspector dweeb from “Ghostbusters.”)

Sam has also done excellent work on the folly of the FDA’s tobacco crackdowns.

[Thanks to Dan Picasso for the great illustration  for Barron’s]