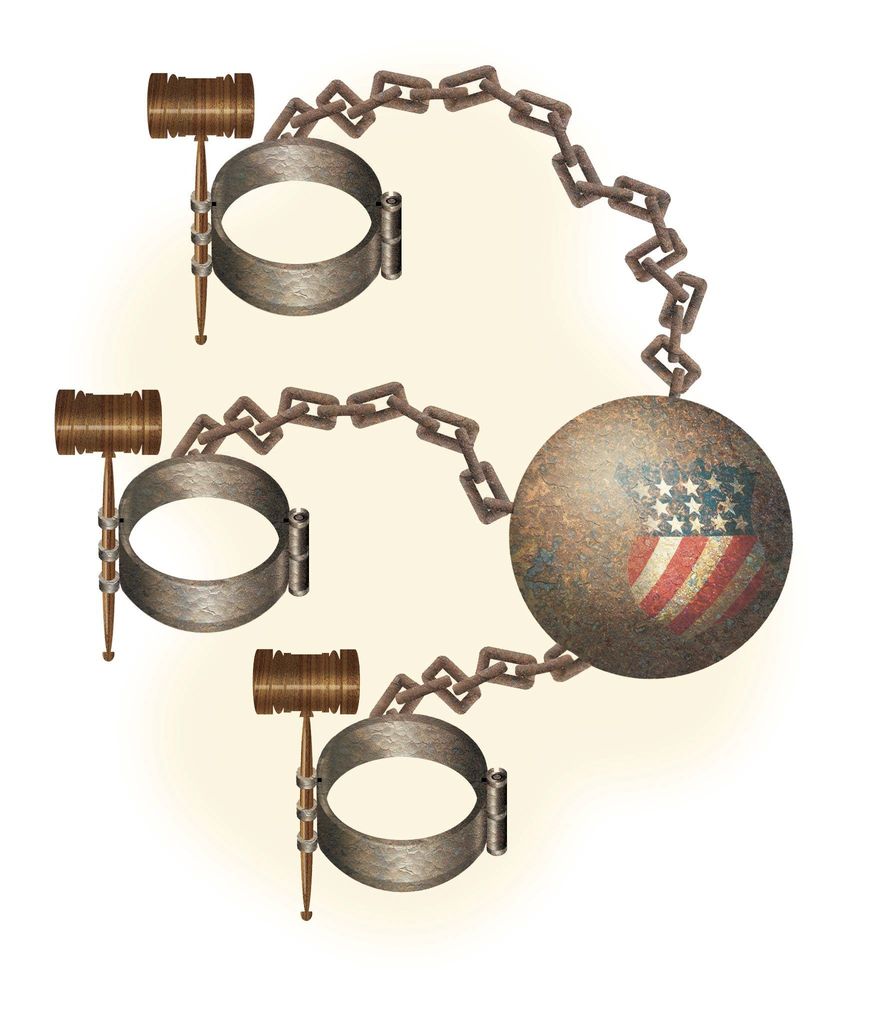 At last week’s Supreme Court oral arguments on the Affordable Care Act, several justices questioned whether a verdict against Obamacare would be “unconstitutionally coercive” to state governments that did not create health care exchanges. Justice Sonia Sotomayor fretted that such a ruling could result in “intruding on the federal-state relationship.” The Supreme Court is sometimes hypersensitive about the rights of state governments at the same time it rubber-stamps the destruction of the rights of private citizens.

For instance, the Affordable Care Act trounces freedom by giving the Internal Revenue Service the right to heavily fine individuals who do not purchase federally approved insurance policies, canceling millions of individuals’ insurance policies, entitling the Health and Human Service Department to outlaw many low-cost health insurance options, and compelling individuals and businesses to subsidize other people’s abortions and contraception.

Unfortunately, this is typical of the oppressive practices the Supreme Court has countenanced in recent decades:

Supreme Court decisions on asset forfeiture have helped police confiscate cars, cash and other property from scores of thousands of Americans without a criminal conviction. The nationwide epidemic of legalized looting became so embarrassing that Attorney General Eric Holder recently promised to curb the abuses.

In 1982, the Supreme Court entitled government agents to intrude onto private land without a warrant as long as they did not venture into areas where individuals were involved in “intimate activities” (i.e., nudist camps). The resulting “open fields” doctrine often makes it practically impossible to convict a government agent of trespassing.

The Supreme Court has failed to curb the federally funded militarization of police and the profusion of no-knock raids across the nation. Instead, the court has continually granted new powers to law enforcement, such as its 2001 decision sanctifying the arrest of a Texas mother whose only crime was that her child wasn’t seat-belted during a short drive. Even though Texas law did not authorize arrests for seat -belt violators, the court upheld handcuffing the mother to avoid creating a “systematic disincentive to arrest” people for even “very minor criminal” offenses. Since almost everybody is violating some arcane government edict, the court practically gave lawmen the prerogative to jail whom they pleased.

The court has turned a blind eye to almost all the civil liberties abuses of the war on terror. The court has done nothing to curb the Obama administration’s crackdown on journalists and whistleblowers. The court has refused to accept any case challenging the Transportation Security Administration’s whole-body scanners that take explicit “birthday suit” photos of almost every airline passenger.

Nine years after revelations that the National Security Agency was illegally commandeering Americans’ email and phone records, the court has done nothing to curb an abuse far worse than the British “general warrants” that helped provoke the American Revolution. In a 2013 decision, the court effectively absolved warrantless federal spying on citizens because the victims could not prove they had been spied on — a ludicrous precondition for objecting to a secret surveillance regime.

Even when the feds have clearly violated a statute such as the Anti-Torture Act, the court either refuses to accept key cases or effectively grants immunity to all the officials involved in breaking the law. The court’s acquiescence makes it far easier for agencies to cover up outrageous conduct that would shock Americans if it was exposed.

Supreme Court decisions have helped Congress and multiple presidents camouflage the arbitrary federal fiats that increasingly domineer Americans’ lives. The Supreme Court has granted federal agencies vast sway over private companies by pretending that racial hiring quotas are not coercive. Instead, they are merely “goals and timetables — regardless of whether bureaucrats ravage companies that fail to hire and promote by race and gender.

America’s prisons are overflowing in part because the Supreme Court has objected to few of the 4,500-plus criminal statutes Congress enacted. Thanks to the threat of ruinous mandatory minimum penalties, 97 percent of defendants plead guilty. As Justice Antonin Scalia noted in a 2012 dissent, the current system “presents grave risks of prosecutorial overcharging that effectively compels an innocent defendant to avoid massive risk by pleading guilty to a lesser offense.”

The Supreme Court will likely rule on the Obamacare case in June. Does the court believe that unlimited coercion of citizens is OK but that any pressuring of state governments is a cardinal sin? If the court saves Obamacare to avoid “unconstitutionally coercing” state governments, it will be another milepost on the Supreme road to serfdom.

*Thanks to Alexander Hunter for the awesome artwork.