Having trouble with the ‘Washingtonese’ around April 15? Look no further for a translation.

April 15 is the day each year when Americans are most likely to slander Washington. Unfortunately, the city’s nebulous nomenclature deters citizens from recognizing exactly how well their elected leaders serve them.

To bridge the gap between the nation’s capital and the American people, here is Washingtonese translated into the vernacular:

Emergency — the gift that keeps giving

Transparency — a pledge ritually made in lieu of full disclosure

Laissez-faire — any economic relationship not yet under complete federal control

Truth — whatever people will swallow

Majestic — whatever people bow to

Idealism — an incantation that expunges all past warnings about political power

Due process — any government process that gives troublemakers what they deserve

Misgovernment — an imaginary occurrence which only imbeciles and rubes believe exists

Non-partisan — fervently prejudiced against everything except Republicans and Democrats

Mandate — whatever a winning politician can get away with

Honorable — any public figure who has not yet been indicted

Extremist — anyone who disagrees with or undermines official policy

Patriotic — any appeal that keeps people paying and obeying

Freedom — whatever rulers have not yet benevolently prohibited

Respectable — anyone who vociferously venerates the Status Quo

Anarchist — anyone who advocates across-the-board spending cuts of more than 3.63% 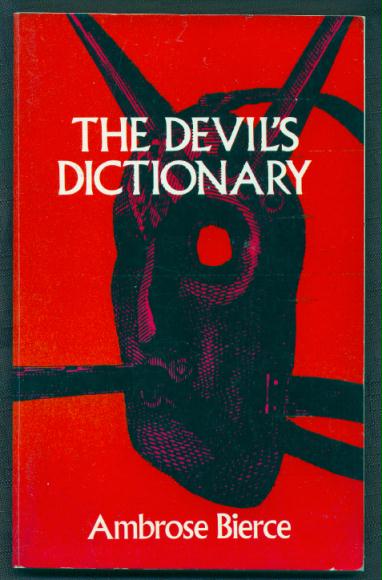